Leading up to The X-Files reboot/premiere (or a “re-miere,” for superfans of terrible portmanteaus) on January 24th, tvDownload’s Drew Grant and Vinnie Mancuso have challenged themselves to recap episodes of the original series from memory. (That’s right: no Googling! Because Google didn’t exist in the early 90’s! [Neither did Vinnie, but that’s beside the point.]) Then the other half of this paranormal investigation unit is charged with tracking down the episode and fact-checking our hazy fever dreams to the plot of the actual episode.

First up, Drew remembers something about the time Scully got an evil tattoo, possibly in Thailand.

Scully gets drunk one night, or possibly takes Ecstasy, and gets a tattoo with some rando she picks up at a bar. I want to say this takes place in Taiwan, but it could very well be the Philippines, or anywhere in Asia, or possibly just a Chinatown. Why does the previously cautious and taciturn FBI agent make such a rash decision? How did she get to Taiwan/Philippines/Canal St? I don’t know, but it probably has something to do with aliens. Or wait, maybe she had just tried to kiss Mulder, but he got really moody because his sister was abducted by aliens, or because his dad is a dick who is also his boss. (Rough.) I don’t know, but the point is: Scully is feeling lonely and vulnerable and has a lot of free air miles. Or else she was drugged.

So anyway, she’s got this tattoo now, and the guy she was on a date with starts murdering people.

Or no…wait, maybe it’s that a guy with a tattoo starts murdering people, and Scully goes deep undercover by….getting a tattoo herself? Could that be right? I mean, in a way, that makes LESS sense, since it would imply that the logical Scully bought this dude’s excuse that his tattoo (which is of a mermaid, I think, so maybe he’s a sailor?) made him do it, which is the equivalent of catching David Berkowitz by adopting a dog.

The more I think about it, the more Scully was drugged and forced to get a tattoo. The tattoo she gets definitely starts telling her to do crazy things, none of which I remember. Her tattoo is of…a male mermaid? A hot guy? An alien smoking a blunt, a la Paul? (Shout-out to Paul!) I feel like she has a flirtatious relationship to her tattoo that is 50 percent more sexually charged than her relationship to life-sized cardboard cutout masquerading as a partner. (Sorry guys, I was “Team Sneaky Rat-Faced Dude with the Weird Black Shit in His Eyes, Though He was Evil Before That For Sure, Because One Time He Chased Scully on a Gondola, But He Had the Benefit of Not Looking Exactly Like My Father” Man.)

Meanwhile, Mulder is off doing something without his partner (maybe he didn’t accrue enough frequent flier points?) or is at least indisposed/displeased with Scully’s burgeoning attraction to a serial killer/her own tattoo. He doesn’t really do anything most of the episode.

Scully definitely gets her tattoo from a creepy Asian man. I hope that is correct, or else this will seem real racist. I might be confusing this episode for the movie Blade Runner, in which case we’ll need to strike a LOT of this. Especially the part where Scully busts out of her hiding place trailed by a flock of doves, screaming “I want more life, fucker!” (Or “father,” depending on which version of Blade Runner I’m remembering.) I want to say this guy also sold eyeballs on the side, but that sounds…wrong.

Definitely scratch all this.

Eventually, Scully’s behavior–which has begun to attract attention only because she has let her hair down from that metaphorical librarian’s bun and taken off her metaphorical glasses and basically done a whole metaphorical She’s All That makeover, but sluttier–raises enough eyebrows that Mulder and Co. come to the rescue right before she does something irreversible, possibly with that sailor. Maybe involving sex? Maybe killing each other in a murder/suicide? Maybe getting other, equally terrible tattoos, possibly involving a combination of the American flag, four-leaf clover and bald eagle holding in his talons an alien smoking a blunt? Who knows!

It turns out that the guy is beyond saving, or at least Scully doesn’t give a shit about him, not after she gets the poisonous ink that was leaking in through her skin and destroying the uptight/non-murdery part of her brain lasered off. That’s right: there was no supernatural element to this episode! It was just a classic case of “bad ink,” which is of course a gamble right up there with “bad shellfish” that we all take whenever traveling abroad. Scully goes back to being a priss. Her love affair with a sailor or a tattoo of a sailor or possibly both dissipates. Everything goes back to normal, and the whole thing is a not-so-thinly veiled morality tale about poor impulse control and how it leads to murder/shitty tattoos.

Unfortunately, the story did not land for me, as I’ve grown up to get several tattoos, including one a mermaid with a television set for a head, and also have murdered a bunch of people in either Beijing or on Bowery. I can’t really recall*.

*Ooh, maybe I’m confusing this episode with Total Recall, not Blade Runner. They were both Philip K. Dick adaptations!

So, okay, this is totally season 4, episode 13, “Never Again.” I wish I could say I figured this out because I have some  Cumberbatch-ian super-memory mind-vault that I use exclusively to store “after the really good seasons” episodes of the X-Files, but I didn’t. Turns out if you type in “X-Files Scully” into Chrome’s search bar, the second suggested search is “X-Files Scully tattoo” (right under “X-Files Scully cancer,” YIKES), which leads you right to “Never Again.” Then I got super distracted by switching over to the “images” tab and basking in the poor choices of others. Like this! 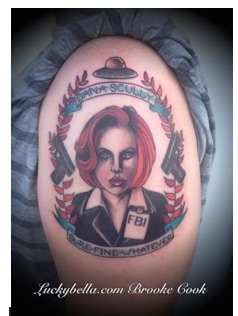 Anywozzle, in terms of what Drew remembered correctly, Scully does in fact get a tattoo! But she’s not drunk. Or on Ecstasy. Or in Thailand. (Really close, though! It’s Philadelphia.) Actually the guy who gives her the tattoo isn’t Taiwanese either. He’s not even Asian. I’m pretty sure there’s not 1 Asian person in this entire episode. I’m actually 99% sure there is not 1 Asian person in the entire run of The X-Files. Way to go co-producer Vince Gilligan, future creator of Breaking Bad.

So the tattoo that tells people to do crazy things isn’t on Scully, it’s on the arm of a dude named Ed Jerse. Jerse goes on a drunken bender, stumbles into a decidedly un-Taiwanese tattoo parlor, and wakes up with a pin-up tattoo that calls him a loser a bunch and goads him into murdering his downstairs neighbor.

Oh, also, the tattoo is voiced by Jodie Foster. Is that important? Not to me. If I had a nickel for every time the disembodied voice of Jodie Foster convinced me to murder a downstairs neighbor I’d have roughly 3.5 nickels, depending what state I’m in.

Scully does get a tattoo, though, Her and Mulder get into one of those arguments where Scully SOMEHOW still doesn’t believe in the paranormal, despite the fact she’s been FBI partners with a talking department store mannequin for four years. Either way, she goes to Philly alone to investigate a Russian informant named Pudovkin who claims to have seen a UFO. Through sheer happenstance, one of two FBI agents specifically tasked with paranormal cases bumps into the one person in Philadelphia whose tattoo is telling him to commit murder with the voice of Clarice Starling.

Naturally, they go on a date. The big night out ends in an awkwardly sexualized, kiiiiiinda oddly rapey scene where Scully gets a tattoo while Jerse gives directions. “She wants red,” Jerse says. “Like mine.” Whoakay there buddy.

In the end you were correct, it’s just bad ink driving Jerse crazy, not mystical Taiwanese and/or Philadelphian voo-doo magic. This doesn’t stop Jerse from throwing a rug over Scully’s head and trying to throw her into an incinerator (because if you’re committing murders at the behest of a tattoo they’re gonna be needlessly complicated murders.) Jerse ends up sticking the forearm with the tattoo into the fire instead, which…solves the problem? So maybe it was mystical Philadelphian voodoo magic? The reasons behind the whole “talking tattoo” weren’t really clear here. Jerse should’ve went to the guy from Gremlins, who WAS Asian but also much clearer about outlining the rules governing the murderous wares he sells in his shop.

Things you missed: Jodie Foster, not being racist

On a scale of X-Files themed tattoos, I’d rate your performance a solid: 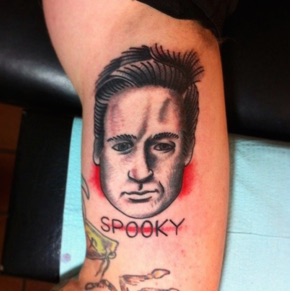 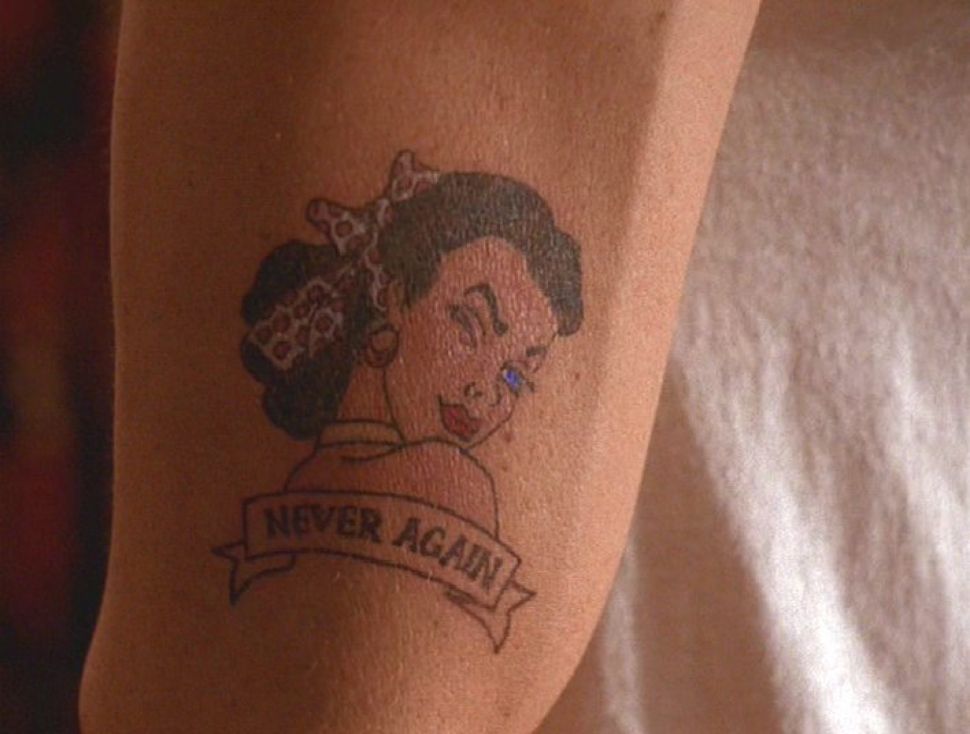