That Israeli Jew. That Indian Jew. That Ashkenazi blonde-and-blue-eyed “no I’m not a Shiksa” Jew. That Russian, South African, Ethiopian, and French #JeSuisJuif Jew. That “inventor of something that’s part of your everyday life but you didn’t even know it” Jew. That religious Jew. That secular, “loving my heritage” Jew. That “I’ve never been to Israel but I’ll get there someday because it’s my homeland” Jew. That “I’m only here for 10 days but I’ll never forget it” Jew.

Tuesday night’s Birthright “Mega Event” at the Jerusalem Convention Center in Israel’s capital drew Jews of every type, from all over the world, representing dozens of Birthright groups.  The night opened with a video inspired by Eitan Chitayat’s video, “I’m That Jew.”

Flashing lights, glowing necklaces, and the DJ’s electronic music were reminiscent of a dance party meets rave. Argentinian and Brazilian groups stood at the front of the auditorium, taunting each other with a rubber chicken. The Uruguayan group stood near the other Latin Americans, eagerly awaiting the show. The Americans, Canadians and Russians gathered on the upper balcony. The Israeli soldiers, Birthright staff and visitors gathered amongst the crowd.

‘We are left wing, right wing, straight, gay, transgender, religious, and secular. But we are united by our love for Israel. As Jews, we know that the reality of today does not have to be the story of tomorrow.’

Michael Steinhardt, the founder of Birthright, greeted everyone on stage. He told the auditorium full of people that the special gift they are receiving, the free trip, requires nothing in return—but he hopes that the 10 days instill a sense of responsibility to be part of the Jewish people. As he began a “roll call” for each nationality present in the auditorium, the American group was the loudest; one boy even took his shirt off and waved it around as if cheering for his team at a baseball game. Everyone seemed so incredibly proud of their respective countries. But then, at the end of the roll call, Mr. Steinhardt asked the Israelis present to make some noise and everybody chimed in with the loudest cheer yet.

Israeli Prime Minister Benjamin Netanyahu came on stage with his posse of security guards. “This land is your birthright,” he said, and affirmed his hope that each individual will go home proud to be part of the Jewish people. He stressed everyone’s responsibility to share the real Israel with friends and families back home. He ended with a simple, “Come Back Soon” as he received a final round of applause from the Birthright groups.

Lynn Schusterman, of the infinitely generous Charles and Lynn Schusterman Family Foundation, announced how special every Birthright year is, but that this one was unique because her granddaughter was on a trip. Noting the diversity within the room, she remarked, “We are left wing, right wing, straight, gay, transgender, religious, and secular. But we are united by our love for Israel. As Jews, we know that the reality of today does not have to be the story of tomorrow. We each have the power and responsibility to share the real Israel with the world.”

Gidi Mark, CEO of Birthright, told me, “This is a celebration of Jewishness at its best. We are one big family celebrating our birthright and our belonging to the Jewish people. Today marks our first half-million participants to come to Israel. We hope that by next year we will have our second half-million.”

As the event came to a close, everyone sang together Rabbi Nachman of Breslov’s song, “Kol Ha’Olam Kulo,” which translates, “The whole entire world is a very narrow bridge, but the essence (of being) is to have no fear at all.”  At the Mega Event, this was certainly true. With such a diverse crowd, and people from 66 countries who have participated in Birthright, the world truly does seem narrow.  And the bridge: Birthright. 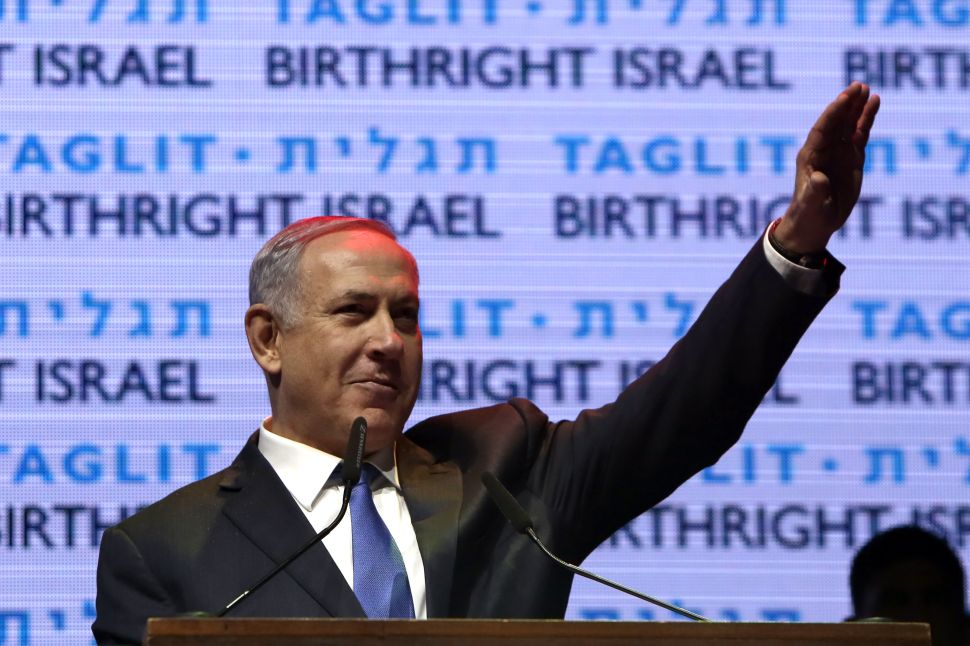