In an age when politics is rotten with the foul stench of dirty money, the greed of special interests, the corrupting power of super PACs and media-driven insults and hate, the young men and women of Iowa have an opportunity to change the world in a few short days.

Lets make one thing clear that most political pundits do not understand. Under the rules of the Iowa caucus the eligibility to vote in the caucus and choose the president who will lead our nation for the next four years includes young people who will be 18 years of age by election day. This means that most Iowans who are 17 years old and in high school have the opportunity and power to make their voices heard in the selection of America’s next leader—so long as they are 18 on the day of the general election in November.

Most pundits seem to wrongly assume that only young people who are already 18 years old can vote in the caucus. When analyzing the potential clout of young voters who support Bernie Sanders and other candidates, they note, correctly, that colleges and universities are very strong in certain parts of Iowa but not in other areas, and ignore, strangely, that high schools exist throughout the state and many 17-year-old high students can vote in the caucus.

The young people who caucus in Iowa make our politics a more honorable profession, make our democracy a more fair and honest system of government, and make our nation and world a better place.

Lets give a standing ovation to every young man and woman who participates in the Iowa caucus for their favorite Mr. Sanders, and for that matter for Hillary Clinton and any of the other contenders in both parties.

The young people who caucus in Iowa and lift the democratic process in all other states make our politics a more honorable profession, make our democracy a more fair and honest system of government, and make our nation and world a better place.

When the world wakes up next Tuesday morning, when the votes of the Iowa caucus have been counted, there will be one of two headlines: either that young voters stunned the pundits and lifted the political fate of Mr. Sanders, or they fell short and it will be Ms. Clinton who heads to New Hampshire with a new head of steam.

My guess is that the turnout of young people will be on the stronger rather than weaker side, but that is just the opinion of one man who has no vote on whether young people choose to participate or not.

What is stirring and exciting about the young men and women who support Mr. Sanders is the idealism and passion and sincerity they bring to our democracy—qualities in short supply from their elders.

What I will say is that in the event of a surging turnout of young people that contributes to an Iowa victory for Mr. Sanders, it would be good for the Democratic party, good for America, and while she would vigorously disagree with me, good for Ms. Clinton who would respond by upping her game in championing the progressive causes that I believe that she and all Democrats would be well-advised to champion.

In recent weeks I have criticized Ms. Clinton for unwisely escalating a negative attack against Mr. Sanders. In recent days she has de-escalated her attacks against Mr. Sanders and moved to articulate a more positive vision for her candidacy and for that I praise her today. Going forward I will call it like a see it.

What Democrats need is the kind of progressive populist vision that—according to at least four major polls, two national and other polling of Iowa and New Hampshire—has shown Mr. Sanders enjoying a landslide-level lead over Donald Trump and running ahead of Ms. Clinton in matchup polls against Republicans.

What I find moving in the widespread support for Mr. Sanders from young people is their loyalty to his candidacy, because he represents their dreams for America. By contrast, Mr. Sanders is opposed by virtually every major establishment throughout politics, finance and corporate media.

Our country is a better place because the young teach their elders that democracy is not about greed and self-interest but about the dreams and aspirations that those who are the future bring to the politics of America.

It is important that a young black state legislator from South Carolina shifted his support from Ms. Clinton to Mr. Sanders. It is disappointing, though not surprising, that older generation figures like Al Sharpton and Jesse Jackson have not been players in the great populist debate gripping the Democratic party.

What I find stirring and exciting about the young men and women who support Mr. Sanders—and also those who support Ms. Clinton and other candidates—is the idealism and passion and sincerity they bring to our democracy, which are qualities in short supply from their elders.

The most important meetings that will be held today will not be in Washington backrooms, cable television studios or even in the White House when Mr. Sanders meets President Obama.

Those meetings are unimportant compared to the meetings in high schools and on college campuses when Students for Sanders and Students for Clinton will debate each other about which candidate should lead the nation, and organize themselves to attend the caucus. I feel exactly the same way about student meetings of those who support the various Republican candidates—bless them all.

America is a better place because young people teach their elders that democracy is not about greed and self-interest but about the dreams and aspirations that those who are the future of America bring to the politics of America.

Regarding the students for Mr. Sanders, it will be interesting to see how many of their parents are so inspired by the idealism and patriotism of their kids who participate in the caucus that they join them on caucus night.

All candidates have pluses and minuses. One of the most noble things about Mr. Sanders is that the young man who marched with Martin Luther King in Washington when he was a student himself has retained the passion of his idealism and inspires that same nobility of purpose in the young people who support him today.

So, as the presidential campaign begins in earnest and the voting in Iowa will begin momentarily, I tip my hat and salute all of the young people who lift our democracy by participating in Iowa and every primary and caucus that will follow.

My advice to the young men and women of Iowa and America: it is your country and your future.

Make the most of it and the world will take note of it, and the nation will be better for it! 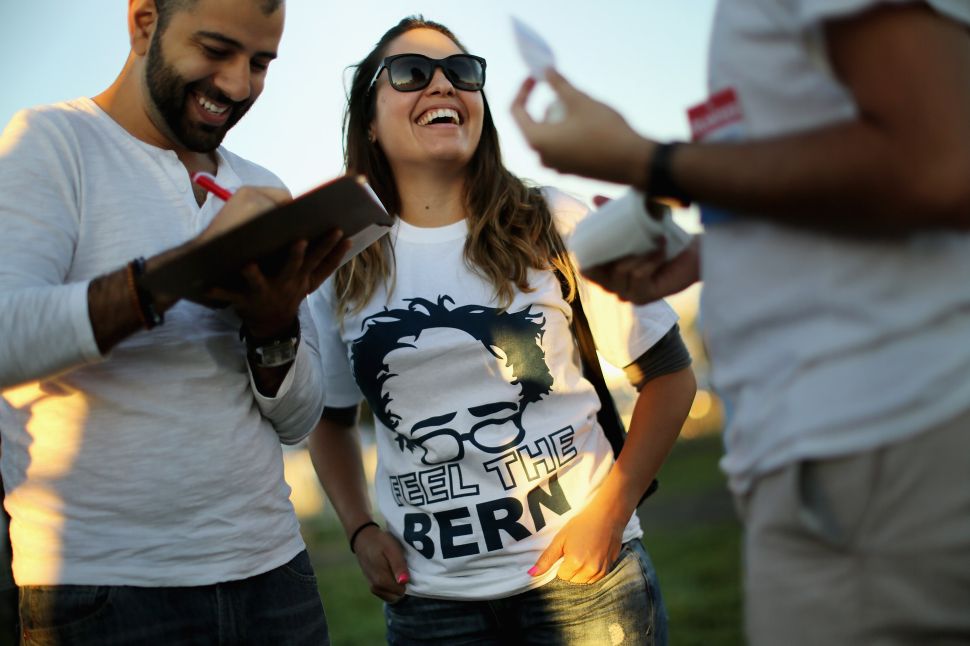