Pope Francis spent forty minutes with Iranian President Rouhani on January 26th. At the conclusion of the meeting, Mr. Rouhani asked the Pope to pray for him. This is a huge event.

After his visit with the Pope, Mr. Rouhani spent another hour talking with Vatican leadership. The Vatican released an official response, saying that the Pope and the Iranian President spoke about the nuclear accord and the need to work together to confront terror and extremism. The statement emphasized “the important role that Iran was called to play” in confronting terror in the world and in the region.

Islam—especially Shiite Islam—has been hostile to the Pope and Catholicism. Mr. Rouhani’s visit to Rome is a tremendous step towards tolerance, if not acceptance, and is most definitely a positive gesture.

There is a long history of conflict and serious theological tension between Shiite Islam and Catholicism.  This visit signifies that Islam can, when they wish to, adjust to new issues and new powers. Mr. Rouhani is illustrating an essential leadership quality that Muslims leaders emulated for centuries past in order to get along with potential rivals and adversaries and thereby achieve their short term goals.

Looking at it from the point of view of the Vatican, they want to reach out to Iran. They want to help protect their own, those Christians residing in the Middle East, and to make certain that their vast list of properties is kept secure.

The Pope represents a force that is the only power in the world with numerical parity approaching the numbers of adherents in the Islamic world.

While in Italy, Mr. Rounahi also set aside time to visit the famous Rome Capitoline Museums. Out of respect to the conservative Iranian president, the museum directors covered the nude sculptures along his path. Not surprisingly, Italian media expressed outrage at the censorship.

Italy is not the only stop on Rouhani’s European adventure. Iran’s President has a serious agenda and several goals he needs to accomplish.

Mr. Rouhani intends to buy planes and court investors. During the first week since sanctions were lifted, and over $50 billion in foreign investments have already poured into Iran. Now Mr. Rouhani knows what he needs, so after two days in Rome, he jetted to Paris, France, where Iran has ordered 114 Airbus planes including the Jumbo A-380, the A-320 and the A-321 from France. The price tag for all that metal comes to a total of $18 billion.

Iran needs to renew their passenger fleet which has not been updated for nearly four decades. The French received the Airbus order, but Boeing, the Seattle based US company, would really like to supply Iran, too. In addition Iran wants to add at least 20 new regional planes. The best supplier for the regional jet is CanAir/Bombardier. They are a Canadian company.

Just before Mr. Rouhani left for Europe, Iran hosted 300 guests from various airplane companies, luring them back into the Iranian market. Iran is becoming a serious consumer. They have the need and they have the cash. Any supplier is going to want to step up and bid to get their business. But doing business with Iran can still prove risky.

There are still many unknowns for Mr. Rouhani to deal with. He may be in trouble at home.

Important elections will be held in Iran on February 26. We must monitor these elections carefully, they are for parliament and for the Assembly of Experts.

The parliament in Iran is also known as, and better translated as, the Assembly of Representatives. In Persian is it called the Majles or the People’s House. It is composed of 290 members from 31 provinces and 65 districts.

Becoming a member of the Assembly of Experts is not a simple matter. Even the grandson of the Ayatollah Kohmeini who was the founder of the Islamic Republic, a man named Hassan Khomeini, was denied permission to run for the Assembly of Experts. Only 166 people have successfully passed the vetting process for the 88 spots. 801 applied and only 1 in 5 are permitted to run. Officially, Khomeini’s grandson is not religiously competent. He is 44 years old and a relative youngster. His real problem is that he is considered to be a liberal. Mr. Khomeini’s disqualification amounts to a huge blow to Mr. Rouhani and his agenda, underscoring how the Iran of today is even more extreme than the Iran of the original revolution.

Mr. Rouhani may wander through Europe and pretend that all is normal back home, or at least, comfortably new normal. But the future of Iran and the direction it takes will be determined on February 26.

These will be heated elections. The future of Iran is in flux. A blessing from the Pope probably couldn’t hurt. 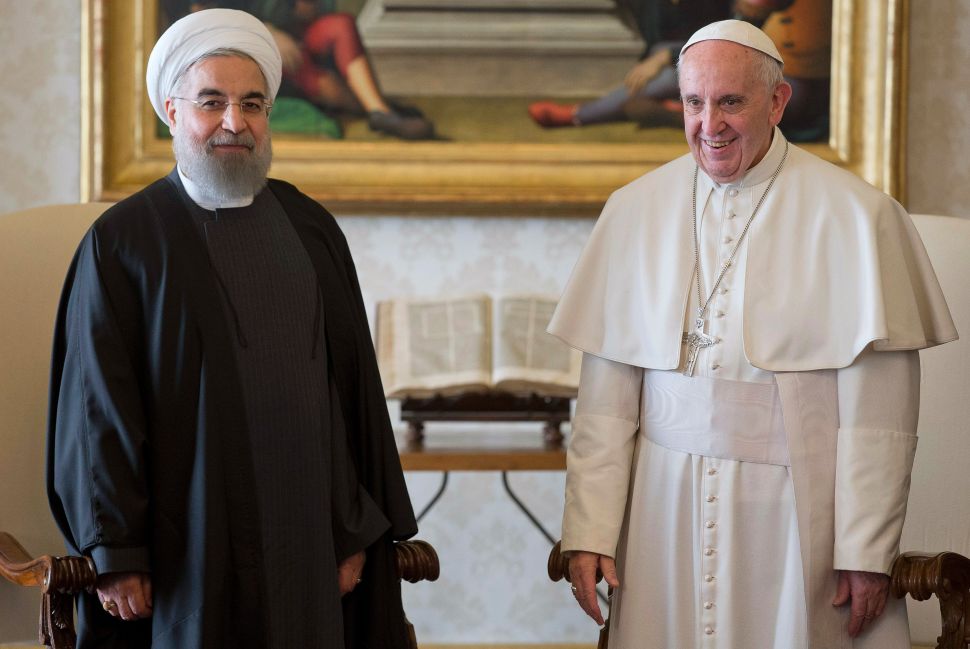