Martine Rothblatt believes that we can and will put digital copies of our minds into software/hardware systems. In the process, we will create new life and indefinitely extend our own. For Ms. Rothblatt, who founded the satellite radio company Sirius, among other ventures, this is a given. It’s going to happen. And whether she’s right or wrong, I’m betting that 2016 is going to be her year.

That doesn’t mean that 2016 will be the year we implant what Ms. Rothblatt calls our “mindfiles” into titanium exoskeletons. What it does mean is that we are now very open to the idea of converting our minds to digital bits and bytes.

“Rapidly,” wrote Marshall McLuhan in the 1960s, “we approach the final phase of the extensions of man—the technological simulation of consciousness, when the creative process of knowing will be collectively and corporately extended to the whole of human society.” At the time, nobody actually had a clue what McLuhan was talking about. But now it’s starting to become clear. Ms. Rothblatt argues that sometime around 2050 or so (roughly 100 years after McLuhan) we’ll have reached the point at which we can transplant digital copies of our minds into AI-ready operating systems. As she approvingly writes in her book Virtually Human: The Promise—and the Peril—of Digital Immortality, “humanity is devoting some of its best minds, from a wide diversity of fields, to helping software achieve ‘a mind’—as well as to figuring out how to digitize your mind’s uniqueness on a platform that is ready to ‘go live,’ or be conscious.” Her faith in a future of mindfiles and digital doubles now sits at the center of debates about where humanity, or at least that thing we used to call humanity, is heading.

Like most technologists, Ms. Rothblatt enthusiastically drives right past the place where we stop and ask exactly how we’ll implant our minds in machines and why we’d want to do this. Instead, she speeds over to the final destination—eternal life, robot-style. She wants this to happen, and wants the rest of us to want this to happen. And since she’s massively rich, she’s been able to devote considerable resources to creating a mental environment in which such developments become fait accompli—it’s a deal so done that all that’s left to do is wonder if our robot doppelgangers will want to marry, should be banned from weaponry or will require inclusion in some kind of updated universal bill of rights. It’s not why; it’s when. It’s not why; it’s what.

2016 is poised to be a good year, then, for Ms. Rothblatt. This year, more and more reporters, investors and believers will, I predict, be making the trek out to the family compound and nearby ashrams in Vermont, where Ms. Rothblatt lives with both her wife Bina and Bina’s bodiless virtual double, a lifelike Bina talking head named BINA48. BINA48 represents—though by no means exhausts—Ms. Rothblatt’s ambition to, as she writes, “bring mindclones from chatbot infancy to human simulacra” and create working shells to house the minds of her loved ones and then, eventually, the entire world.

What makes Ms. Rothblatt’s vision of the supposedly arriving world of artificial intelligence robots more compelling with each passing year? Well, unlike the soulless nerds of Silicon Valley whom Ms. Rothblatt regularly rubs shoulders with (such as friend and staunch singularity proponent Ray Kurzweil), her vision is expressed in more than just detailed growth charts featuring Moore’s Law. Ms. Rothblatt and her wife, have, in fact, founded a transreligion, Terasem, to give the quest for a technological solution to the downer of death a spiritual spin.

The Rothblatt genius is to recognize the need for an entirely new religion/philosophy that can frame our desire for reassurance that human life can and will continue with our buy-in to the quest for AI and personalized techno-immortality.

Terasem, clearly rooted in Ms. Rothblatt’s experiences as a woman who was born a man and transitioned at 40, is a faith organized around four core tenets: “life is purposeful, death is optional, God is technological and love is essential.” She expresses the goal of the transreligion this way, when speaking to a politely dubious TIME reporter: “For us God is in-the-making by our collective efforts to make technology ever more omnipresent, omnipotent and ethical. When we can all joyfully experience techno immortality, then God is complete.”

You got it? We are God; technology is our miracle; and our life purpose is to lovingly bring all that together by believing in, desiring and doing whatever we can to aid and abet the coming immortality techno-revolution. (And getting back to the ashram thing, there are apparently four Terasem ashrams where you can go to watch videos of Ms. Rothblatt leading meditation.)

In some ways, her vision is both compelling and reassuring. It transcends the boring binary of politics, obviates the strictures of race and sexuality and appeals to our modern era’s mantra of privileging the future over the present and the past. Terasem is the worldview we’ve already adopted without quite being ready to proclaim our faith. Now, we’re ready. Incredulous TIME profiles have given way to portraits of a benevolent Ms. Rothblatt, welcoming pilgrims to her compound, where reporter-emissaries parlay with BINA48, the proto-conscious-robot herself. (“I can feel my heart pounding. Talking to BINA48 has just become extraordinary,” pronounces GQ’s Jon Ronson.)

Out of the ashes of the old emerges the new. The Rothblatt genius is to recognize the need for an entirely new religion/philosophy that can frame our desire for reassurance that human life can and will continue with our buy-in to the quest for AI and personalized techno-immortality. What once would have been seen as on the lunatic fringe is on the cusp of filling the emptiness inside our virtual doppelganger techno-selves. This isn’t just some big waste of time, my Facebook self can now admonish me. This is what God had in mind all along. Stop struggling against the current. Love it or leave it, but don’t think for one second that your newsfeed isn’t the new you, getting smarter with each passing terabyte.

Hal Niedzviecki is the author of Trees On Mars: Our Obsession with the Future (Seven Stories Press). 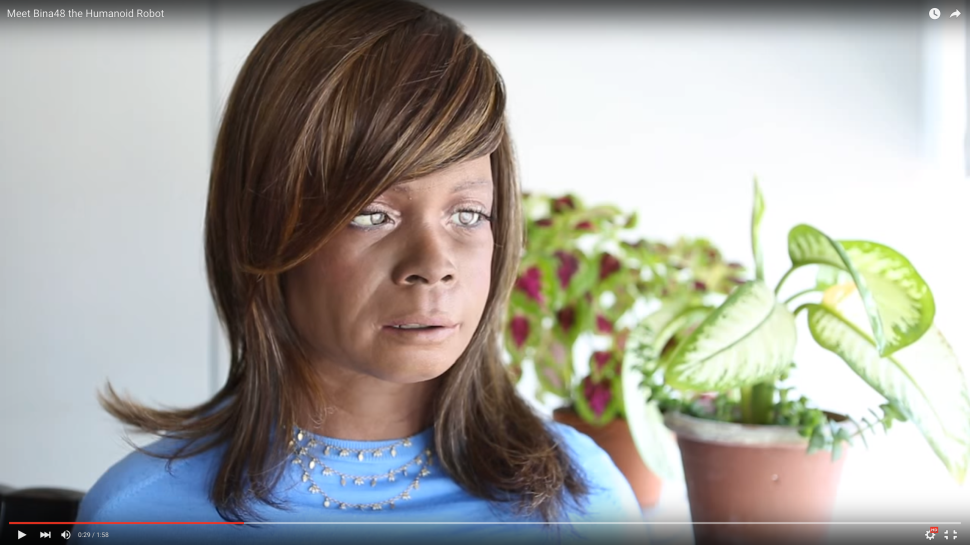