Opening a gallery in the front of his massive studio on West Broadway in Soho—a block more known for flagship luxury stores these days than artists’ lofts—is only the latest maverick move for an artist who could really care less about the way other artists do things. At age 71, Neil Jenney still exhibits as much talent as he does disregard for the art world. For over 40 years, he’s chosen to show his paintings without the help of a gallery (with the exception of a show he did at Gagosian in 2013) in a DIY style that predates multiple generations of bearded Brooklyn hipsters. Now, like many artists 40 to 50 years his junior (and to the disappointment of art dealers everywhere), Mr. Jenney is opening up his own artist-run space in order to show his own work and work by his friends. Although he’s as he says “under the radar” these days, Neil Jenney is a pivotal figure in the history of 20th century American art. His breakout body of work from 1969-70, a forceful reaction against Minimalism, dragged both painting and figuration back from the brink of extinction. His brushy, vernacular paintings were (lovingly and ironically) dubbed “Bad Painting” by art critic and curator Marcia Tucker, who curated a landmark 1978 show of the same moniker at the New Museum where Mr. Jenney’s work was a standout among standouts. Now, he’s mounted a new, two-man show of his own work and alongside the repoussé metal wall works of his longtime friend, Robert Lobe. We spoke to him about being called “funky,” why frames are important and his unique path onto museum walls.

Though you became famous for your early “bad” paintings, you actually began your career as a sculptor.

Yes, I started working with linear sculpture. I considered them kind of anti-minimal. This was 50 years ago when everything was gray. Eventually, they attracted Richard Bellamy, who used to be my dealer.

And is it true that Andy Warhol saw these and bought a few?

Yes. I showed these 49 years ago in the first show that included Bruce Nauman and Richard Serra. They sold from that show and I didn’t. Bellamy said “People like your stuff but nobody’s got floor space. Everybody’s got wall space.” I said “now you tell me.” So I started to make these for the walls, and then they sold.

You’ve been in this fantastic space since the early 70s, correct?

Yeah I bought it in ‘73. Then I opened up my own little gallery on Wooster Street, so I didn’t really need a dealer. Bellamy was a nutty guy when it came to money and stuff like that. I was better off handling it myself. And Ivan Karp was around and he’d send his collectors up and get a commission sometimes.

By then you’d switched over to painting, but not just painting, “bad” painting.

The bad paintings occurred after I did this show in Germany with David’s dad, Rudolph Zwirner, in 1968. By the time I got back to New York, everything [in the galleries] was Photorealism! Ivan Karp was showing photorealists with [Leo] Castelli, and then he opened up his own gallery and got guys like Richard Estes and Duane Hansen. I felt like it was just second generation Pop—pretty but a stale idea. So I told a friend “it would be better to have a good idea and do it terrible!” So then I started the “Bad Paintings” which seemed like a new realism to people.

So by “realism” you mean a literal idea with a very descriptive presentation?

People got very Freudian when analyzing the paintings, but that wasn’t what I was doing. I said “No, no, I’m just showing things relating to other things. ‘Accident, Argument’, get it?” I realized I had to shut down these reactions and make it very clear. But people would still say “oh it’s very funky”, which was code for ‘Californian’, and if you were a New York artist, you didn’t really want to be Californian. That was the kiss of death.

Have you always made your own unique frames for the paintings?

I started doing these in 1970. I decided to do “good” painting and started for the first time to read about realism. I discovered that to the Greeks, a painting was meant to mimic looking through a window onto a scene. So the frame is the architectural foreground that presents the illusion. So I realized, “holy shit, it’s not just decoration. It’s presenting the illusion. The painting has to have a frame.” So suddenly, I’m back in the sculpture business again. I guess I’m really a sculptor at heart. I’m having a show here this fall called “Frames of the 20th Century.”

It’s funny that your post-minimal style came back into vogue over the last 5 years or so, and now figurative painting is coming back. Meanwhile, none of these young artists even know about you or your work.

Yes, I’ve been under the radar. I had the space here and was able to show my work at my apartment, and I never really needed shows. The [bad paintings] were kind of a hit, but now I really wanted to do the opposite. I believed in the zeitgeist and was positive there were a few similar artists out there doing the same thing, so I thought “I’m just going to work on my oil technique and get it ready, and then we’ll have a real movement” like AbEx. But you know what? It’s 40 years later and it didn’t happen. It’s just me and Vija Celmins.

[Laughs] Well there’s Rackstraw Downes too, but I understand what you mean. I’m sure painted realism will make a comeback soon.

My analysis is that in the whole realm of art there are only two styles: Abstraction and Realism. And they’ve always existed side by side. You have the pyramids—the definition of refined minimalism—with the head of Queen Nefertiti right next to it—the epitome of advanced Egyptian realism. Or there’s the Parthenon—a collection of abstract iconography—with the Phidian sculpture [Athena of Parthenos] inside. They’ve always been side by side, and that’s the way it is today.

In your newer work, you often paint from nature. This mostly happens at your house in Connecticut, right?

Yes, I split time between New York and Connecticut.  I’d like to build a house there, as I’m really a frustrated architect. I like buildings that look like they could’ve been built 1,000 years ago. I also have some acreage set aside to build my own museum. You know, some of the best paintings I ever did belong to the Museum of Modern Art, but they keep them in storage. So if you want to be on the walls, you have to have your own museum.

Speaking of MoMA, can you tell me a little about your secret ‘Picasso’ series?

I call them my “improved Picassos.” Every time I would see a nice Picasso over the years my reaction was always the same: “Wow that’s a terrible frame.” So I wanted to frame a Picasso for the longest time, but I’m never going to be able to get an actual Picasso. Then one day, I discovered a street artist by Port Authority that was pretty good. At one point, I went by and I saw a stunning little Picasso copy that he’d made and decided to buy it. So I made a frame for it, and I loved it! I wanted some more, but the guy was too busy painting wedding pictures, so I finally had to order some Picassos from him. I’ll do stuff to them like trim edges and touch up the color, because he’ll make them too bright or makes mistakes. But I’ve been doing this for five or six years. When Larry [Gagosian] saw them he said “what are these?” and I said “well it’s just a hobby that I have, improving Picassos.” He couldn’t stop looking at them and for years he’s been talking about having a show of them at his uptown space. But now that I’ve opened my own gallery I thought “what am I having this show on Park Avenue for?” So the next show here [on February 1st] will be a two-man show: “Picasso and Jenney.” 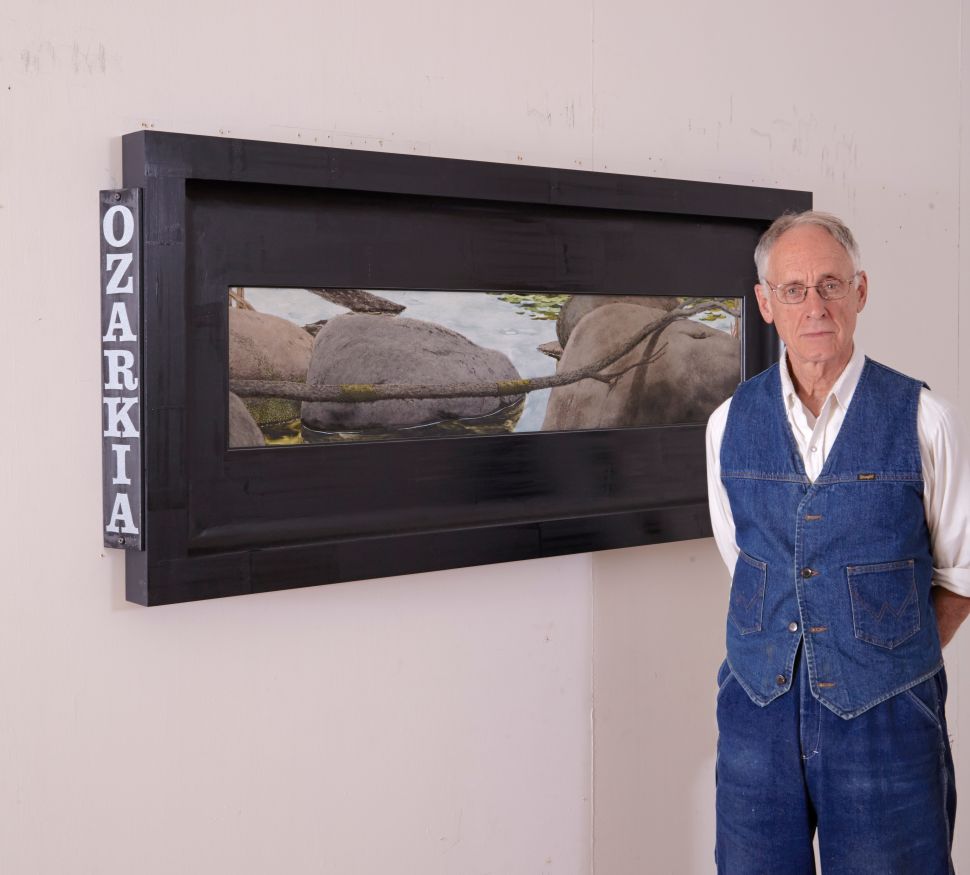