A day after he announced a lofty goal to essentially rebuild Pennsylvania Station, Gov. Andrew Cuomo has put forth an ambitious plan to expand the Jacob K. Javits Convention Center by one third.

“Javits is the busiest convention center in the country right now,” the governor said at the sprawling 11th Avenue complex this morning. “But like anything else, it’s a competitive industry. If you want to remain competitive, you have to grow.”

The Javits Center, which is controlled by the state-run Empire State Development Corporation, will foot the bill for the expansion, which Mr. Cuomo estimated will cost $1 billion. While the announcement cements the 30-year-old convention center as the main venue for trade shows in New York City, it also kills hopes of a convention center near either of Queens’ airports.

Mr. Cuomo has been on an infrastructure tour, unveiling projects daily as he gears up to next week’s state of the state address. Between the Javits Center, Penn Station and an expansion of the Long Island Railroad, the governor has rolled out more than $5 billion worth of infrastructure work since Tuesday.

Read more at the Commercial Observer. 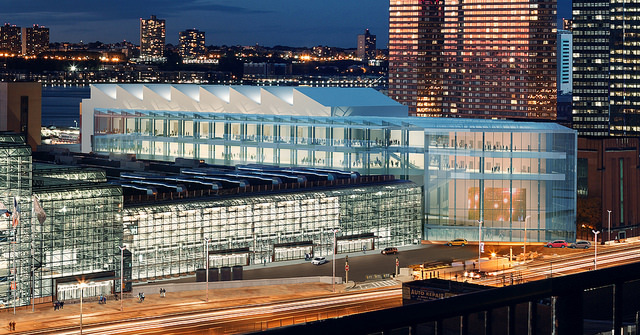