M. Night Shyamalan shocked horror fans and 90’s nostalgia-addicts alike when he announced–along with TNT– his plans to revive the ghoulish anthology series Tales from the Crypt, which originally ran on HBO from 1989 to 1996. But then, because this is M. Night Shyamalan we’re talking about, came the twist. Not only would Mr. Shyamalan’s reboot do away with the anthology format, but Tales from the Crypt‘s infamous host, the Crypt Keeper, would not be a part of Shyamalan’s vision. At least, not the a wise-cracking, pun-slinging, devilishly-cackling character voiced by comedian John Kassir for the series’ entire seven-season run. While all involved with the revival own the rights to the title Tales from the Crypt AND the Crypt Keeper, the likeness itself–the puppet designed by Freddy Krueger creator Kevin Yagher–still belongs to HBO.

.@slashfilm I'd never make Tales without the CK! Will be a new take on him as the puppet is property of HBO. Promise he'll be cool and dark!

This hasn’t stopped the groundswell of support for Mr. Kassir, including the type of online campaigning normally reserved for true crime documentaries. We hopped on the phone with Mr. Kassir to get his take not only on Tales from the Crypt‘s revival, but to look back on 24 years to find out just how much the Crypt Keeper–and the man behind him–has…groan.

“The Crypt Keeper is that ride up to the top of the peak before the roller coaster drops you down. Whether the roller coaster ride was the best you’d ever been on, or pretty good, or it sucked, the anticipation of going up is always exhilarating.”

Observer: Are you aware of how upset fans are you’re not coming back as the Crypt Keeper?

John Kassir: It’s amazing. As much as the fans are supporting me, I’m supporting them on this. One of the reasons the fans are so upset is this: the Crypt Keeper is that ride up to the top of the peak before the roller coaster drops you down. Whether the roller coaster ride was the best you’d ever been on, or pretty good, or it sucked, the anticipation of going up is always amazing. It’s the anticipation of it. It’s the fun, giggly part. No matter what the other part is, the fun part makes it okay for you to be doing this. The Crypt Keeper did that.

What was your immediate reaction to hearing about [M. Night Shyamalan’s] reboot?

I just hope they don’t use the name Tale from the Crypt just to get people to watch. I’m not going to discount what they can do, because they have very creative people working on it. But just the fact it’s not an anthology series doesn’t quite scan with me. Ours were all short stories, they were little morality plays. And if you didn’t like the story one week, you’d love the story next week. With something like American Horror Story…I’ll watch American Horror Story, and two-thirds of the way through the season I’m like “the hell am I watching this for?”

Is it hard to picture a Tales from The Crypt without the classic Crypt Keeper?

Yeah, I mean [The Crypt Keeper] was the front man. He was Mick Jagger.  He was the leader of the band. He probably even looks like Mick Jagger now!

“I saw some of the other people auditioning looking at the script copy and saying, ‘Oh my God this stuff is terrible.’ They didn’t get it. The Crypt Keeper loves saying this stuff.”

I remember thinking “okay, this is going to be something cool, something I dig,” because I loved the comics as a kid, I was one of the freaks who actually read those books. And it was HBO, so they would  let us do some cool stuff with it, but it’ll probably end up just having a cult following. I think that’s what a lot of people thought.

But, you know, it had some of the biggest producers at the time, and these guys are still going strong. You’re talking Joel Silver, and Richard Donner, Walter Hill, Bob Zemeckis who was making some of the biggest films of all time. David Giler, who produced Alien. Kevin Yagher! He created the Crypt Keeper, was the top of his fraternity of effects and creature making. These were heavyweights running the show.

What was it like, auditioning for the Crypt Keeper?

HBO only had, like, ten guys come in, some of the top voice comics at the time. Michael Winslow, some other guys I can’t remember.

Can you remember developing the voice?

I saw some of the other people auditioning were looking at the script copy and saying “Oh my God this stuff is terrible.” They didn’t get it. The Crypt Keeper loves saying this stuff. He’s delivering it like it’s the best Shakespeare.  I went down to Kevin Yagher’s studio to see what the character would look like, and saw that he had rotting flesh, and holes in his threads…Kevin always described him by saying “You don’t want to get near that mouth, it’s too disgusting.” I decided then to add texture to the character. I wanted him to treat the language like it was important, so I gave him a British accent. I was thinking about who the great hosts of the macabre were. Alfred Hitchcock, but with a faster delivery. I used to love Alfred Hitchcock Presents, and the way he would introduce those episodes with such a tongue-in-cheek delivery.

At some point I was laughing at my own jokes, and I was laughing at his jokes. I started giggling, then I went into this bloodcurdling, screaming laugh for Kevin. His face just went blank. I thought he was freaking out, but really he was like “that’s GOT to be in there.”

“I can’t even tell you how many people told me over the years they got into horror because of Tales from the Crypt. It was the Crypt Keeper, and my voice in particular, that pulled them into the TV set.”

Why do you think there is this resurgence of interest in Tales from the Crypt?

Tales from the Crypt, over the last five years, is the the biggest it’s ever been because these are the kids who grew up with it. I can’t even tell you how many people told me over the years they got into horror because of Tales from the Crypt. It was the Crypt Keeper, and my voice in particular, that pulled them into the TV set. If you had asked me if kids were watching this show when it was on the air, I’d say no effing way. These kids were not only watching it, but because they didn’t have HBO they were getting the neighborhood together to watch it. A lot of people say “He was my best friend as a kid. I had the doll, he was my best friend.” Or girls say, “he was my first boyfriend.” [laughs]

And the doors not completely closed for you to participate?

Nowadays, [horror series] do so much with CGI. We used practical effects, and to me that’s part of the fun. It’s like, “Oh my god, they used jelly and a guy’s finger sticking through a cardboard box.” Black and white, they used chocolate syrup and it looked like blood. We had one of the best practical effects artists, Todd Masters, doing Tales from the Crypt. If [the reboot] is just going to have someone walk into a room and say “oh, look at that crow over there” and CGI something in, it’s not going to work.

So, it’s understandable that the fans are fearful of this new Tales from the Crypt, because it goes against everything that made the original successful. It was a show of artisans.

[This interview has been edited and condensed for length and clarity] 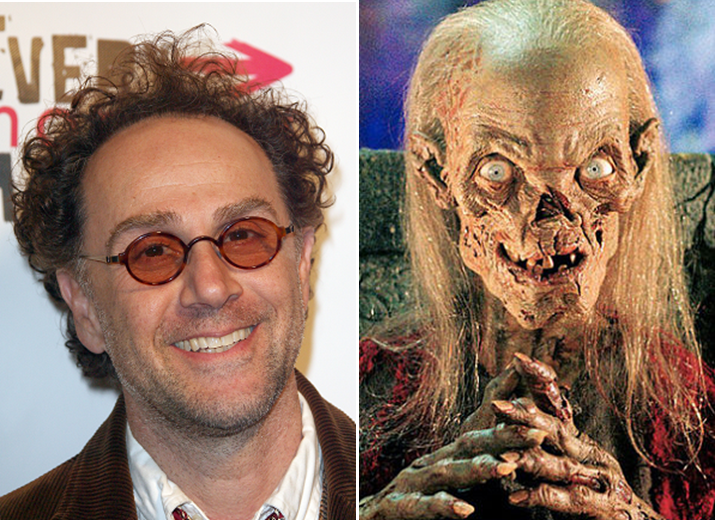