Assemblyman Joe Lagana (D-38) is making reform to New Jersey’s inheritance and estate taxes a priority for his second term in office. The Democrat has introduced a bill, A611, that would boost the current threshold for the estate tax from where it currently sits at $675,000 to $1.5 million. His plan also includes limiting the inheritance tax from impacting next-of-kin family members of a deceased person and shifting class c and class d beneficiary classifications.

According to Lagana, who introduced this bill during his first term to no avail, making the changes in the estate and inheritance taxes will have a significant, long-term benefit for New Jersey. Lagana said that by removing some of the tax burden imposed by these two taxes—only New Jersey and Maryland have both—more people will likely stay in the state through their retirement, improving New Jersey’s economy.

“It does play a major part in why people leave New Jersey,” Lagana told PolitickerNJ. “When it comes to taxes, we are always trying to figure out ways to relieve the tax burden on our residents and this is something we can phase out over the next ten years, or whatever we can come to a consensus on, to do it. It is a step in the right direction to let the people of New Jersey know that we are concerned about taxes and we are concerned about making people’s lives a little bit easier.”

Federally, the threshold for the estate tax comes in at $5.3 million, almost eight times more than New Jersey’s $675,000. What that means is that, in order to qualify for the federal state tax, the gross amount of all assets would need to total over $5.3 million for the country to charge estate tax.

In New Jersey, the average home sold for $397,279 in 2015, according to the state Department of the Treasury. Because a home is factored into an estate’s value upon death, many New Jersey residents are forced to pay the estate tax, even if they are not wealthy. According to Lagana, this issue is especially noteworthy in his Bergen County district.

“Being in Bergen County, especially in district 38, $675,000 is a low threshold,” Lagana said. “The average home is probably around $450,000 or $500,000 and I don’t think people realize what is actually part of your estate. A life insurance policy of $150,000 is part of your estate. A simple life insurance policy and a modest home would put you above that threshold.”

Lagana is not the only legislature currently looking to change the estate and inheritance taxes. Assemblyman Ronald Dancer (R-12) has his own bill, A423, that aims to exempt principal residences from the inheritance and estate taxes. Lagana’s bill puts him at odds with his fellow LD38 Assemblyman Tim Eustace, a co-sponsor of Dancer’s bill. Both bills have bipartisan support for now with A611 being cosponsored by Assemblyman Anthony Bucco (R-25).

According to Lagana, the provisions in a bill like Dancer’s would be too drastic and lead to economic consequences in New Jersey.

“There are other pieces of legislation out there,” Lagana said. “Some call for a complete repeal. A complete repeal would bring it up to the federal level that is $5.3 million. That is pretty high as far as the threshold in my opinion. A complete repeal would create a seven or eight hundred million-dollar hole in our budget. I don’t think it is the right way to do it right now because that is money we are going to have to find to plug the hole.”

Lagana said that his bill, which would boost the threshold to $1.5 million, would create a much smaller budget hole. He said that the hole would likely be around $200 million if his bill were eventually enacted.

For now, Lagana said his priority is making sure that the estate and inheritance tax changes can be enacted in a responsible way that wouldn’t lead to a loss of programs.

“If the only way to do it were to cut charity care, income tax credit, programs that benefit the less fortunate, we would really have to weigh our options,” Lagana said. “If that were the case, I certainly wouldn’t push for a cut on the inheritance or estate tax at the peril of these very important programs.”

According to Lagana, his next step is to talk with legislative leadership and the budget chair to work on making the changes to the taxes a reality. He said he hopes his bill can make it to committee this year, a crucial step towards having discussions and coming to a consensus in the legislature about the bill’s advancement.

At last week’s State of the State address, Governor Chris Christie spoke exhaustively about the need to make changes to New Jersey’s estate and inheritance tax. According to Lagana, he hopes to work with the Governor’s office to put a bill on the table that Christie is “willing to sign.”

“I want to work with the Governor’s office to see what he would be willing to sign or not,” Lagana said. “He has talked about tax fairness and wanting to work with the legislature to get this done. I am not sure where he stands. I am not sure if he is looking for a complete repeal or if he is somewhere in the middle and looking for something that we are going to phase out over the next ten or fifteen years. Whatever it is, I haven’t had any of those conversations at this juncture.”

Lagana said his main goal when approaching inheritance and estate taxes is to keep families like his own in New Jersey.

“People are saying ‘I am going to work here but then, when I retire, I am going to go somewhere else.’ And that is what we need to change, we need to change that mood.” Lagana said. “We need people who grew up in New Jersey, for them to say ‘I want to stay.’ I fall into that category. I never want to leave, I love the state. It has provided me and my family with so much. I hope that this generation and the next generation of people want to stay here.” 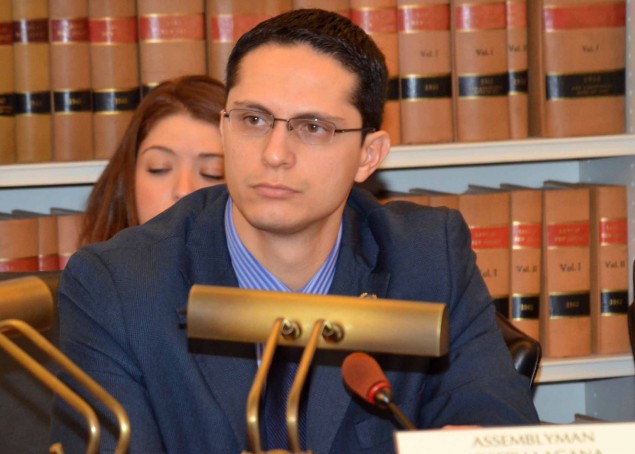