In 1977, Gil Scott Heron wrote a song entitled “We Almost Lost Detroit” about Fermi 1, America’s first commercial nuclear breeder reactor, which suffered a partial meltdown in 1966 and nearly destroyed the city. Decades later, Detroit is flirting with a different kind of disaster which has been brewing in the region since before Gil Scott Heron’s activism manifested through music: bankruptcy. In 2013, Detroit became the largest city to file for bankruptcy protection in United States history, after years of paying bills with borrowed money.

Detroit’s initial growth stemmed from a booming automotive industry. By 1950, the city’s population reached nearly 1.85 million, but the prosperity set the city up for failure, as the surplus of blue collar jobs was short lived. Auto companies began decentralizing out of Detroit in favor of smaller production plants, while developing labor-saving technology that eliminated jobs with machinery, and as the city’s suburbs grew exponentially, they took the tax revenue from wealthy and middle class families who could afford to leave.

In the 1980s, with job prospects absent, a crack-cocaine epidemic set in. As gangs thrived off of drug activity, the homicide rate skyrocketed to 636 murders in 1985—the highest of America’s largest cities. Crime rates further exacerbated white flight and strained community relations with police, as shortcuts became the norm for law enforcement to handle the workload. A county medical examiner in 1987 told The Chicago Tribune 37 percent of the city’s homicide victims tested positive for cocaine, and the U.S. DEA deemed Detroit as having with the worst crack problem in America.

According to the Bureau of Labor Statistics, Detroit’s unemployment rate is 24.8 percent, with 41 percent of residents living beneath the federal poverty rate.

Today, the city’s population is estimated at 680,000 by the U.S. Census, with 10.6 percent identified as white—compared to 78.9 percent across Michigan. Detroit’s African American population has suffered from mass unemployment, violent race riots, police brutality and a crumbling, abandoned infrastructure—where many of the city’s buildings remain unoccupied in ruin. According to the Bureau of Labor Statistics, Detroit’s unemployment rate is 24.8 percent, with 41 percent of residents living beneath the federal poverty rate.

Aside from a small Greek entertainment district, much of Detroit is ghostly deserted. Only remnants of a prosperous history remain in the rotting factory buildings and empty lots reduced to rubble. Once a thriving example of the American dream, all that is left of those distant memories are the vanquishing relics, scattered sparsely, obstructing Detroit from recovery.

In the start of the 21st century, the city elected Kwame Kilpatrick as mayor, whose tenure from 2002 to 2008 was plagued by scandal and controversy. In 2008, Detroit’s City Council filed a recall petition and requested the Governor of Michigan, Jennifer Granholm, to remove Mr. Kilpatrick from office. He is currently serving a 28-year prison sentence for racketeering, extortion, and bribery.

When former NBA star Dave Bing took office in 2009, Detroit’s economy was too out of control for the city to manage independently, and the state appointed Kevyn D. Orr in 2013 as an emergency manager of city operations. Mr. Orr cut $7 billion from Detroit’s $18 billion debt through the Chapter 9 bankruptcy process.

State legislators remain gridlocked over how to fix the situation before the school system goes completely bankrupt, which would leave Michigan taxpayers on the hook for $1.5 billion.

“The city learned to work towards orthodox management systems, which it’s doing now, and think of long term solutions to build a city going forward,” Mr. Orr told the Observer in a phone interview. “It’s not unlike what Miami had to do in the 1980s, what Washington D.C. had to do in the 1990s or New York City had to do in the 70s. I think Detroit is doing a very fine job learning its lessons and moving forward. Hopefully, they continue to do that because the initial indications have been that it’s doing quite well.”

The city’s strained finances have severely diminished the quality of social services available to residents. A report by Detroit’s emergency manager found the average police response time—including calls of priority—was 58 minutes in 2013. City employee retirees took cuts from their pensions as part of the bankruptcy deal, and healthcare benefits were scaled back. A survey conducted by Boston College’s Center for Retirement Research found of the $3.8 trillion the state and local municipalities are responsible to pay its retirees, $1 trillion of that sum remains unfunded. Many parts of the city are in darkness due to non-functioning street lamps.

Most recently, Detroit’s school district has been in turmoil. Teachers have taken to Twitter to document and share decrepit conditions, in addition to organizing sick-outs—closing dozens of schools since the beginning of the year. The city has issued orders for improvements, but a new protest of greater magnitude—correlating with President Obama’s visit to speak to the United Auto Workers at the North American International Auto Show—shut down almost all of Detroit’s public schools.

Between 2005 and 2012, the school district lost nearly half of its student enrollment, and much of its current budget is being used to pay back its debt. In February, Detroit must begin making $26 million in monthly payments. State legislators remain gridlocked over how to fix the situation before the school system goes completely bankrupt, which would leave Michigan taxpayers on the hook for $1.5 billion. Darnell Earley, the district’s emergency manager, has been unable to mitigate the downward financial spiral in the six years since his predecessor’s appointment.

Yet some improvements have begun to take hold. The federal government has funded a city bus system that will run efficiently without cutting services to riders. Crews are installing 65,000 LED streetlights, bringing many neighborhoods out of darkness for the first time in decades. Thousands of vacant homes have been demolished, and negligent owners are being pressured to either improve dilapidated property or turn them over to the city land bank for renovations. Ground has broken on a new NHL arena for the Detroit Red Wings, the riverfront has been revitalized and billionaire Dan Gilbert invested nearly $2 billion in revamping downtown. 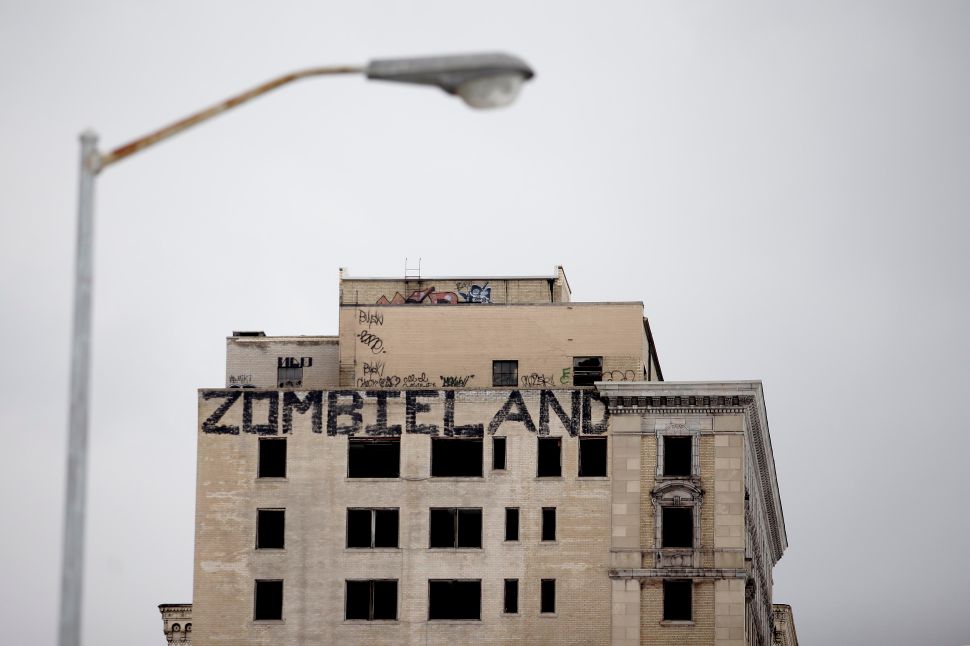