Everyone has found themselves, at one time or another, in a situation and thought, “Just how in the hell did I end up here?” It’s worse when the situation seems eerily reminiscent of something that’s happened in the past, and all the more painful if it’s something that was difficult to deal with and/or get over.

Such is exactly what happens in this episode of SVU, during which Olivia finds herself, once again, at the wrong end of a gun.

When Noah’s babysitter Lucy visits the other family that she sits for (how does she have the time?!), she’s met at the door by the mother of the family who seems out of sorts for some reason. Picking up that something might be amiss within the household, possibly a domestic violence situation, Lucy asks Olivia to do a quick check on the family.

After first attempting to shoo Olivia away, the mother tells Olivia to c’mon in. Stepping into the townhouse, a man grabs Olivia and jams a gun in her cheek. Turns out a drugged out trio looking for money from the owners are holding the family hostage. And now, Olivia is right in the middle of it.

What transpires in the next hour no doubt seems eerily familiar to not only Olivia but to fans of SVU as well; a bit reminiscent of the William Lewis saga. While ringleader Joe Utley is no Lewis, he’s still a psycho with a gun.

Joe and brother/sister duo Roxie and Ralph have taken the Crivello family hostage under the misguided notion that they can saunter in, steal cash they presume is in the home, and leave. To say that their plan fails miserably is an understatement.

Upon Olivia’s arrival, Joe pulls her into the apartment and then slams her back against the door. When she identifies herself as a New York City police officer and admits that she has a gun, which Joe quickly confiscates the weapon.

As Benson works to diffuse the situation at every turn, she makes some strides, but it’s when her astute crew figures out what’s happening that things quickly escalate. Suddenly, the Emergency Service Unit (ESU) is on the scene. They quickly set up a parameter, complete with snipers.

With Captain Tucker (yes, Tucker is now a Captain) acting as negotiator, he and the NYPD operatives manage to capture Ralph while he’s made a bank run with Mrs. Crivello, get Roxie to surrender and convince Joe to exit the brownstone to board an awaiting vehicle, one that he thinks will take him to a helicopter and then a plane. As Joe emerges from the townhouse, using Benson and the two Crivello children as shields, Benson convinces him to let the children go and once they are out of range, she quickly turns and punches Joe in the face. As he reels back, he’s hit with a sniper’s bullet that leaves him dead before he reaches the pavement.

As she’s whisked away by Tucker and her squad, Olivia’s first thoughts are of her son as she insists on confirming Noah’s safety and demands to see him. As Tucker assures her that they’ll bring the boy to her, she thanks him, and in an unusual turn, he tells her that she did a good job. The ordeal is over.

When Olivia found herself in that townhouse, she could have lost it, especially when Joe immediately “frisks” her and holds a gun to her cheek. The closeness of that first encounter could have sent her into a personal breakdown, but that would never have happened to the Olivia we now know. An inner strength that she gained because of her encounters with Lewis clearly show in this moment. To some, the Olivia we’ve come to know might have seemed sort of devoid of emotion throughout this ordeal, but that’s only because she knows that that’s not the best way to go here. It’s clear to her from the go-get that this is a dire situation and that she must keep her head together and not fall apart. Once she’s in that townhouse she morphs from “Olivia” into “Lieutenant Benson” immediately because she’s acutely aware that this isn’t just about her, she has to worry about the family trapped in this crisis with her and she has to use her skills as a police officer to bring this to an acceptable conclusion. In an interesting way, it’s as if she understands the importance of the family aspect here more than anything else.

That element of family plays a role within the hostage trio as well, as kidnappers Roxie and Ralph are siblings. Having Roxie conflicted about her loyalty to her boyfriend and her devotion to her brother added another interesting layer to the conflict within the group.

Joe, Ralph and Roxie weren’t exactly organized in their theft attempt, and were obviously also completely unprepared when an NYPD officer ended up with them in that townhouse. Their ineptness was actually pretty realistic as many criminals, especially drug users, don’t really plan out their crimes. The fact that they’re pretty irrational in their expectations of how things will go is what makes these types of perps so hard to manipulate. They’re almost always fatally optimistic about their chances of success, and whoever is with them at the time is caught up in that callus attitude.

The moral of this part of this episode is—just remember kids, drugs are bad and make you do stupid things. Things that could get you arrested, or worse, maybe gunned down by a sniper. So, really, just say no to drugs.

Another interesting element to this episode was the continuation of the Push-in Rapist storyline. As many will recall, this perpetrator was first introduced in the installment entitled “Community Policing.” That episode was used as a platform to talk about what happens with police officers kill an innocent, unarmed black man whose description resembles their main suspect in a series of rapes. At the time it aired, many viewers were confused when the storyline diverted from the procedural element a bit and the actual rapist wasn’t captured by episode’s end. While the storyline was furthered here, it may or may not be fully resolved, but it’s still gratifying to see it moving forward.

Also showing signs of growth and change, how about that Tucker? Ahem, that’s Captain Tucker now. What exactly is happening there?! For years, and even recently, he’s the guy no one wants to see in the squad room because it means a cop is under investigation for something. Then he up and did Benson a solid and supported her during the IAB William Lewis post-mortem investigation. After that he somehow coaxed Olivia into having a drink with him. Now he’s the one she calls when asked who cares if she lives or dies? That seems a bit much. But, it’s important to note that Benson knows that Tucker respects her as a co-worker and her call to him might have been because she knew that Tucker, with his previous work as a negotiator (and those refresher courses) was the best person to work with on this situation. Whatever the reasons, it’s clear that these two have reached a different level in their “relationship.” What this means is yet to be seen, but it sure fun to watch whatever it is evolving, isn’t it?

As is mandate for SVU, the episode stands on its own, but astute viewers no doubt found the callbacks to the Lewis episodes well placed, with Benson’s coded texted to signal her squad that she needed help, and ringleader Joe using the phrase “lights out.”

In the final moments of the episode, while it was clear that something would bring this situation to a close (there was no way that Joe was going to drive off in that SUV), most suspected it would be a sharpshooter that would take Joe out, and in the end it was, but that wouldn’t have been possible without Benson getting that gun off of her head.  So in that split-second before she cold-cocked the guy, there was a look in her eyes that said, “Now is the moment, because I’m not getting in that car” and that’s when she took action. (And, thinking back, that move looked pretty similar to the snippet viewers saw of the self-defense class Olivia was taking shortly after her first encounter with Lewis—so that class was obviously well worth it!)

The truth is, the moment Benson came into Joe’s life, he never stood a chance. You know they say that sometimes in life, ‘everything that came before prepared you for this,’ and that’s exactly what happened here.

On a side note, Joe Utley had to be a villain—with a name like that. Non-sports fans may not get the reference but the character is named after Los Angeles Dodgers player Chase Utley. Last post-season, in the Major League Baseball Divisional series; Utley went into second base high and hard in an attempt to break up a double-play. His wild slide took out New York Mets shortstop Ruben Tejada, breaking Tejada’s leg. Tejada, a key player, was lost for the rest of the play-offs, and possibly longer. Utley was suspended for two games, but many won’t soon forget how his actions compromised the Mets chances of winning baseball’s highest honor, The World Series.  SVU EP Warren Leight is a Mets so it’s no surprise that he gave this particular character this moniker.

Also a shout out is due to the creative team for pleasingly pacing the movement of the storyline and the visual aspect of this episode. The script was strong to begin with, but a storyline like this like can be tricky as a large percentage of the main action takes place in a static location with lots of conversation (much like an interrogation room heavy piece). The tendency in these instances can be to focus on and constantly cut to whoever is actively speaking.  But here, relevant reactions were thoughtfully included, as were needed spaces, meaning, the piece was allowed to breathe. By doing this the audience was uniquely able to process Olivia’s thoughts a bit more. This is how it should work when a lead character is in peril and has to contemplate just how to act and react. This type of pacing is often hard to do in episodic television due to time constraints. It’s a testament to lead Mariska Hargitay that she provided the emotion needed to pull off this type of character study within the narrative, and she did just that extremely well here.

While this was a thoughtfully tense episode (a phase that seems not often used because there are so few times when it’s appropriate), let’s hope that our fair Olivia can relax just a bit and doesn’t find herself asking, “Just how in the hell did I end up here?” again—at least for a while. 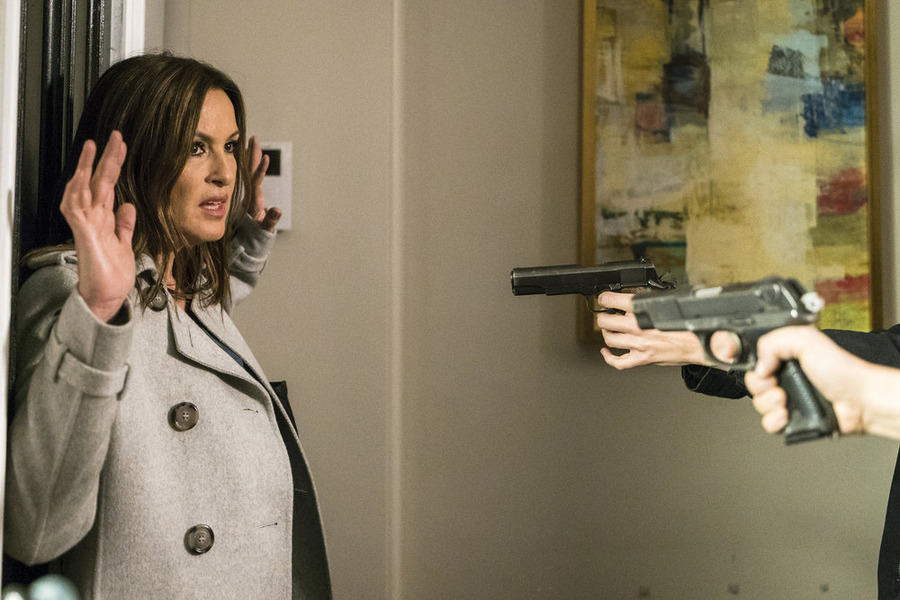