The idea of formally reviewing a show like DC’s Legends of Tomorrow week to week seems, to me, as ridiculous an idea as, well, the plot of DC’s Legends of Tomorrow. What, am I going to harp on the cheesiness of the dialogue in a show about a rag-tag time-travelling crew that includes two immortal ancient Egyptian gods and a man with a freeze ray? No thanks. There are only so many times I can comment on how impressive CW’s CGI capabilities have become, knowing full well no visual will ever be as dear to me as Gorilla Grodd or King Shark. There is only a limited amount of ways I can sing the praises of Casper Crump‘s name. So no, let’s not make this a review.

Let’s make this a competition.

Each week, we’re going to rank our once-and-future legends from best to worst. Criteria includes bravery, usefulness, wit, the ability to not die, and the level at which they contribute to the destruction of all space and time. Let the best (worst?) hero win.

1) Leonard Snart / Captain Cold: Depending on your love of utter ridiculousness, one of the greatest joys Legends of Tomorrow provides is a weekly opportunity to watch Wentworth Miller freezing the scenery before chewing it to pieces as Captain Cold. If anyone wants a course in how to properly transfer pure comic-book evil-ness into film, watch this freeze-ray wielding bastard hold up a pair of diapers in a getaway car, pretending any cop in any universe would mistake these two villainous-ass dudes as fathers. Leonard Snart is the coolest, and I don’t even regret the pun.

2) Sara Lance / White Canary: Let me start by saying major points off for Laurel Lance for saying “Time travel…I can’t believe you’re talking about it like it’s real,” while speaking to a woman who was just resurrected from the dead by a mystical pool called the Lazarus Pits. As for that actual woman who was resurrected, Sara Lance is a badass. Chronos is cool and all, but the standout scene from Legends’ pilot was the scene in the 1970s bar where Lance straight snaps that guy’s arms. Maybe I’m biased because I’m a fan of any fight scene set to an incongruous song (Hey Shaun of the Dead! Watup Kingsman!).  But a back-from-the-dead Canary throwing elbows into faces to the tune of Captain and Tennille? Amazing. (I also like to think that somehow, this bar fight changed the timeline so that love actually did keep Captain and Tennille together, 39 years later)

3) Mick Rory / Heat Wave: Heat Wave clearly doesn’t want to spend any time with anyone other than Captain Cold, and even then is less motivated by the convoluted time-jumping mission and more by “loving to punch things,” so he is automatically the most similar to myself. Rory might even be higher in the rankings, if he didn’t off-handedly support putting the date-rape drug into people’s drinks. Less of that, more off-handedly supporting nostalgia specials produced by VH1.

4) Martin Stein / Firestorm: Let’s ignore for now that Martin Stein had the stupidest piece o dialogue in the episode, when he was like “whoa whoa whoa, to be legends we’d have to be dead,” as if he expected to still be a live 110 years in the future. But Victor Garber plays Stein as the out-of-his-element old-timer of the group so damn well. This half of Firestorm is unique not only because of his age but because, so far, he’s the only one not making this whole time-travelling adventure all about himself somehow.

5) Kendra Saunders / Hawkgirl: I don’t love the Hawkgirl/Hawkman duo in this episode, especially considering how interesting the characters’ mythology is. But still, being the half of the pair that doesn’t remember past lives makes Kendra the more intriguing of the two. Also, you have to possess a steely resolve  to find out you have a kid because a dude–after five whole minutes of dialogue, mind you–saying “You’re just as beautiful as I remember you…mother.” That…is not how you reveal that news to someone, guy.

6) Jefferson Jackson / Firestorm: If you’re superpower is merging together with another person, and the second part of that merging is roughly 30 years older than you and in terrible physical shape, and you are still the second bravest part of that equation for 3/4 of this episode? Get your shit together, Jackson.

7) Ray Palmer / The Atom: Ray Palmer’s immediate descent down the ranking isn’t so much because of the character (although…doesn’t really do much here, does he?), and more about the writers using him as THE most obvious metaphor possible. “My name is The Atom. Atoms are small. But I want to do something BIG.” Why do I feel like we’re going to hear different iterations of that statement for this entire season?

8) Carter Hall / Hawkman: You would think that dying thousands of deaths over countless millennia–not to mention a set of actual wings–would make a character to stand-out in any scenes or, at the very least, display more than one emotion other than “slightly concerned block of wood that can fly.”

9) Rip Hunter: Yes, I put the guy with the slaughtered wife and child at the bottom. Welcome to the Legends of Tomorrow power rankings, everybody. But here me out…this plan is terrible. Rip took the NYT Magazine “Would You Kill Baby Hitler?” thing way too seriously. In what scenario does jumping eight volatile, super-powered personalities backward and forward through time only affect the Vandal Savage situation? Does Back to the Future not exist in the DCU? You’re going to change everything, Rip! Fucking Hawkman is going to bang his mace on the wrong telephone pole and we’re going to end up with a 2016 where Netflix doesn’t exist somehow. Butterfly effect, Rip. Butterfly effect!

Although, I will say this: originally I thought Rip’s plan was awful for a completely different reason. This is the DC Comics universe, correct? So why would you waste your time recruiting this second-tier crew when you could just hit up, like, Superman. Are you telling me if you showed Superman the hologram of future-earth being destroyed, Superman wouldn’t immediately be like “Oh shit fam let’s time-travel right now?” So kudos to Legends of Tomorrow for actually explaining away that plot hole, even if they did it by pointing out how useless these characters are. 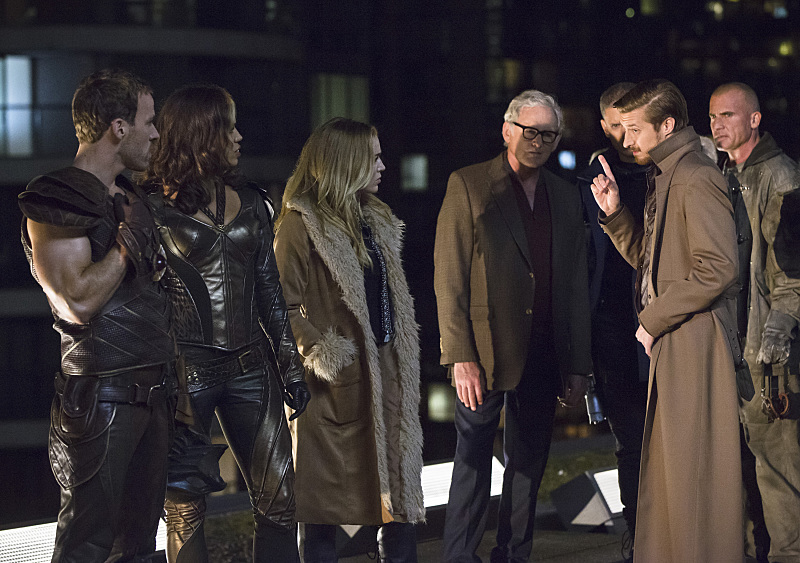