Anti-Israel protestors stormed Friday’s gay rights Creating Change Conference at the Chicago Hilton, hosted by the National LGBTQ Task Force, forcing the cancellation of an event hosted by A Wider Bridge, an organization that advocates growing the relationship between the “LGBTQ communities of North America and Israel.”

“There were about 200 protesters outside the room. They blockaded the room, three of them entered the room, took over the stage, and the people from Jerusalem Open House were not allowed to speak,” explained Adrian Shanker, Executive Director of the Allentown, Pennsylvania-based, Bradbury-Sullivan LGBT Community Center. “They [Kala-Meir and Canning] were escorted out of the room so they would be safe, and we were all asked to leave through the service entrance for our safety.”

Many of those attending the Jerusalem Open House reception were there to show support and learn how the organization was dealing with the aftermath of a stabbing rampage this past July at the Jerusalem gay pride parade.

‘Many of the protestors didn’t quite understand the language they were using—that the rhetoric they were chanting went beyond a political difference—that some of the language was actually incendiary.’

According to a video posted by the Gay Liberation Network, “besides the protests of Arabs, Muslims and Latinos, the Task Force’s moves prompted a who’s who of local Black Lives Matter organizations to publicly denounce the Task Force and/or boycott the conference.”

“When you have Jewish people in a room blockaded by a lot of angry people yelling at them from outside, accusing them of being racists and blocking the exits so they can’t leave, it creates an unsafe environment for Jews, as our cultural history has shown over time,” said Mr. Shanker.

The Pennsylvania gay rights leader does give the protestors the benefit of the doubt, believing that many didn’t realize the impact they were having on a number of visibly Jewish attendees.

“For a lot of us it wasn’t a discomfort for having discourse around Israel and Palestine and human rights, but rather a discomfort because many of the protestors didn’t quite understand the language they were using—that the rhetoric they were chanting went beyond a political difference—that some of the language was actually incendiary.”

Citing the crowd chanting “from the river to the sea, Palestine will be free,” Shanker believes the protestors misunderstood that to mean a better human rights record, not realizing it is actually a call for the elimination of Israelis from that region.

Andy Thayer of the Gay Liberation Network told the Haym Salomon Center, “People at our protest were angry—rightly so—but no one’s safety was significantly threatened, which is more than could be said when such protests happen in Israel and the occupied territories.”

The week before the conference began, the National LGBTQ Task Force had cancelled the reception, fearing the event would be “intensely divisive rather than casual and fun.” According to the Washington Blade, “LGBT rights advocates and their supporters, including the Anti-Defamation League, criticized the National LGBTQ Task Force over its decision to cancel the event. The organization on January 19 announced it had reversed its decision.”

This reversal by the Task Force prompted Twitter posts by #DarkMatter, a “trans south Asian performance art duo,” who objected to the attendance of A Wider Bridge. The Chicago-based LGBT publication Windy City Times credits in part these “online writings” for helping orchestrate the protest.

A January 22 statement by the Gay Liberation Network explained why the activists targeted the Israeli presence:

“For several years the Israeli government has attempted to use propaganda about the freedoms some LGBTQs in that country have as a cover for their increasingly brutal rule over Palestinians, a process known as ‘pinkwashing.’

“Because of the brutal racism of the country, mimicking South Africa under apartheid—one set of laws for Jews, another for Palestinians—most Palestinian LGBTQs don’t enjoy those freedoms. Instead, they endure the anti-Palestinian racism meted out on a daily basis to gay and non-gay alike.”

“The people who were protesting didn’t want to have a discussion, come listen and learn and respond. They just wanted to yell and disrupt and prevent a conversation from happening because they disagree with it,” said Mr. Shanker. “I am an observant Jew who is LGBT, who has personal viewpoints that are mixed around Israel and I think it’s okay to be critical of Israeli government action at times, that doesn’t mean we should disrupt speakers we disagree with.” 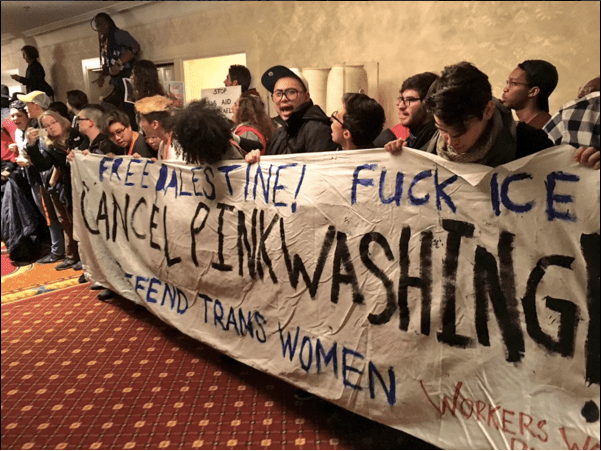