It’s always a pleasure to spend some quality time with Linda Lavin onstage. Whether she’s singing Broadway show tunes in some cabaret or milking laughs on Broadway, she has a brittle sense of timing and a brutal sense of tempo that leave every turn of phrase planted firmly in her perfectly sculpted cheeks. In the new play Our Mother’s Brief Affair, she pulls out all the stops and leaves no laughs unexplored, even when they aren’t there.

The play has two things going for it. In addition to the revelation inherent in discovering Ms. Lavin’s extensive gifts, there is the lively art of playwright Richard Greenberg, who knows how to pick and choose just the right words. It’s a winning combination. This is not his most flawless play, but if Mr. Greenberg sometime fails to prune away the clutter, Ms. Lavin does it for him. She can take one brief, withering line like “As I sew, so shall I rip” and crack its shell like a walnut, reducing the audience at the Samuel J. Friedman Theatre to hysteria. This is a talent she employs often, because the play, about an unmoored wife and mother whose family never managed to understand her completely, is often in danger of losing its own anchor. But somehow it works so well under the rueful eye of director Lynne Meadow that you go away sated.

Ms. Lavin’s feet are planted firmly on the ground and her head is tilted in the direction of some watchful cult of admirers out of view in the wings as she tackles the role of Anna, a complex Long Island housewife full of feminine contradictions trying to maintain her equilibrium in a threatening mire of obscurity. Her life has been so undefined that she goes everywhere clutching a stylish Burberry trench coat to give her a sense of mystery nobody bothers to investigate. Her husband gave up trying years ago. Her children—twin siblings—seek clues without success. Her son Seth (Greg Keller), who writes newspaper obituaries with a philosophical attitude to disguise his own failure as a serious writer, describes her with irony: “She was nostalgic—but not for anything that ever happened.” His twin sister Abby (an intriguingly self-contained Kate Arrington), a lesbian librarian who lives in California, is too pragmatic to see any reflection of herself in a mother she has never known.

The occasion that reluctantly brings them all together, in a New York hospital reunion, is Anna’s latest premonition of death. Convinced she’s in the final phase of her final days, she makes a decision to blurt out a confession that she’s guarded in secret for many years. In a voice Mr. Greenberg describes as “Flatbush on the Thames,” Ms. Lavin makes her grown kids listen—joined by the rest of us, mesmerized.

Wafting into memories of better times, she confides that years ago, while her son was studying the viola at Juilliard, she would come into Manhattan on the train from Great Neck and walk in the park in her Burberry, pretending to be somebody alluring. One day a handsome man sat down on the park bench next to her. He was a widower. She thought he was a real gentleman. To children who only learned about their parents by tolerating their foibles and mannerisms, the revelation that their own mother once launched into a clandestine affair has the impact of electroshock therapy at Bellevue.

But what comes next really rocks. It seems that her lover had a double identity. In truth, he was David Greenglass, the younger brother of infamous Soviet spy Ethel Rosenberg, who was convicted of treason but still regarded by many as an innocent Cold War victim of anti-Communist delirium. David’s testimony against his sister was responsible for sending her to Sing Sing prison and the electric chair in 1953. And now Anna’s connection to this historic case—real or imagined—is the legacy she extends to her children. If all else fails, maybe they’ll remember her now…

It’s an extravagant ruse, bogged down in contrived exposition, that doesn’t quite work. Richard Greenberg always amazes with his precise selection of words and images, and Linda Lavin serves him well. When she vividly describes the artistic display of green apples that match the wallpaper décor in the boutique hotel where she had her affair, you can see the lobby. You can smell the Norman Norell perfume she saves for sex. But as her secret unravels, her children are unconvinced, and so is the audience. After she survives yet another deathbed experience, it is not clear if her scenario was real or imagined.

Our Mother’s Brief Affair is a memory play with four actors (John Procaccino appears as both the controversial David Greenglass and Anna’s dead husband Abe, who drops by from time to time to fill in the blanks for the children regarding his miserable marriage to their mother). It’s about a woman battling senior citizen dysphoria by making up her own life as it goes along. In the end, she challenges her children to distinguish between fact and fiction and make up their own minds about the truth. It’s not an easy task, for the characters onstage, or the audience, but two hours with Linda Lavin is a happier payoff than a tax refund. 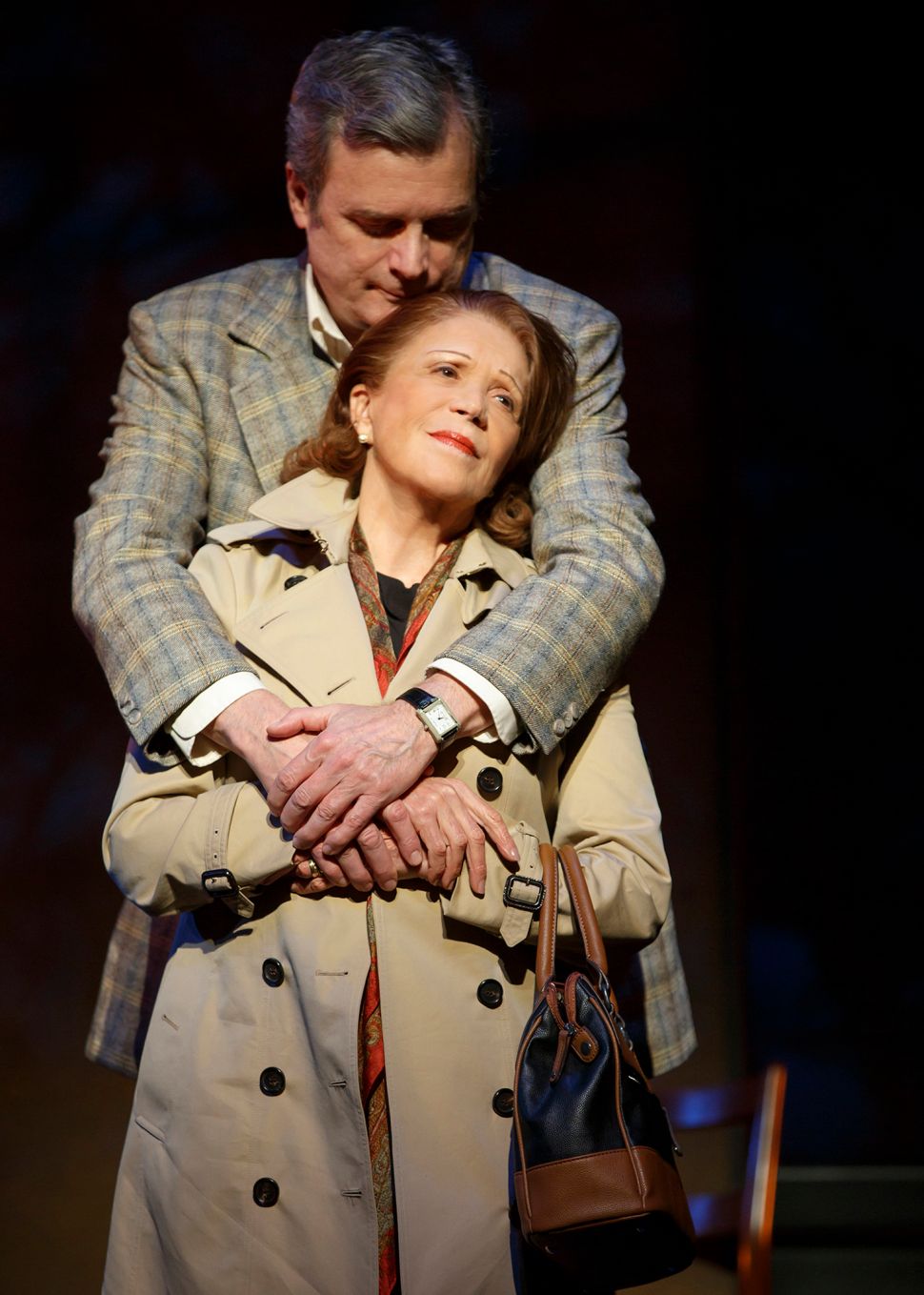