Several networks passed before one took a chance. That network is now reaping the rewards of their gamble. The faux competition series Lip Sync Battle has proven to be a big hit for Spike, and it shows no signs of slowing down.

The first episode was the highest-rated premiere in Spike’s history and the series has spawned hours of viral videos. The second season just premiered in January and the show has already been renewed for a third season. And, the success of the U.S. series has led to the creation of several international versions, airing in places like Chile, China, Indonesia, Poland and the Philippines.

The series was born of an idea introduced on Late Night with Jimmy Fallon in which celebrities battle each other with lip sync performances. Season One’s 18 episodes featured performances by a diverse group that included Mike Tyson, Hoda Kotb, Julianne Hough, Taraji P. Henson, John Karskinski, Will Arnett, Andy Cohn, and Joseph Gordon-Levitt.

Shot in front of a live audience, the game pits two celebrities against each other as they perform lip synced songs in a two round battle, with the crowd determining the winner. The participants don appropriate costumes and often perform intricate dance moves, all in a sort of homage to the original artist. For example, Joseph Gordon-Levitt channeled Janet Jackson as he staged her hit “Rhythm Nation,” Anthony Anderson lip-synced Cee Lo’s “Forget You,” and Channing Tatum performed a Beyonce song in drag and “Let it Go” from Frozen, in a full Elsa outfit.

Now that it’s a popular show, getting big name celebs to appear isn’t as hard as it was in the beginning, admits Casey Patterson, who, with her producing partner of 20 years, Jay Peterson, developed and executive produces the series. “In the first season, we called everyone and they all said no.” Patterson reasons that it’s because those who do agree to battle have to really commit to it. “It’s risky for them because these are actors; they’re not singers, they’re not performers and you’re asking them to do something that’s way outside of their comfort zone. People on the fence won’t do it, they really have to be all in to do it.”

Patterson reveals that it’s the participants who pick the songs they’ll perform, and they usually know what they want to do right away. “It’s really fun when we first talk to them and they jump in with all of their ideas. They talk about wardrobe and how they want the set to look and all of it.  What’s really cool is that the songs that they pick are a kind of window into the celebrity’s tastes and I think that’s something that the audience really is drawn to.”

Once all of the planning is over and showtime draws near, Patterson says that given what they’re about to do, many participants get extremely nervous. “They’re so excited but there’s a part of them that’s like, ‘oh God, I can’t believe I’m doing this.’ I compare it to when you go on a roller coaster – you get in line thinking how fun it’s going to be and then you get closer and you get nervous and think, ‘why did I agree to do this?’ But, once they’ve taken the stage and performed, their attitude changes. They all want to come back and do it again. They love the energy from the audience and say that they feel like rock stars. Most actors work pretty much on set in a somewhat isolated way, so this is like they get to be a rock star for a day.”

The series has spawned many viral videos and this is all by design, explains Patterson. “We give away a lot online. People question that because traditional thinking is you can’t give way too much because it will cannibalize the show. Our thinking is that content lives everywhere and just because we give things away doesn’t mean that viewers aren’t going to come to the show. It doesn’t hurt our ratings and we think it also sends people to set their DVR for the show so they don’t miss it. We developed the series to be shareable. That’s a big part of our strategy.”

One clip that immediately generated millions of hits featured Queen B herself – Beyoncé. The songstress made a surprise entrance as Channing Tatum lip-synced B’s hit “Girls Run the World.” Patterson says that getting the superstar on the show was quite a coup. “Are you kidding? We’ve been reaching out to her since the very first episode. But, the thing is, think about it, Beyoncé always knows best. She choose that moment and it was perfect.”

Commenting on the show’s surprise popularity, Patterson says, “I think it’s really because the format is pure. Jay and I worked early on to make sure that we didn’t fall into the trap of having too many of the troupes of tradition competition or games shows. We realized that we wanted the performances to stand on their own. That was hard to do at first because we weren’t sure if that would be enough for viewers, but now we see that it is.  We see that people really want to just get to those performances so we just try to get out of the way of that. I think people appreciate that we’re getting to the good stuff right away. It makes for a magical mix in each episode.”

Patterson says that a large part of that magical mix includes the show’s hosts, LL Cool J and Chrissy Teigen. “LL has been in the music business for 32 years so he brings a certain knowledge about performing that the participants respect. He’s also just a happy, supportive, nice guy. He makes everyone feel very welcome and they know right away that the won’t let them fail.”  Tegien’s role wasn’t originally conceived as it is now, admits Patterson. “In the beginning we thought that we’d have a DJ, but then we realized that the singing is fake and there’s no music to mix so we changed up that role and we picked Chrissy because she’s just so honest, candid and likeable. She’s like a combination of Goldie Hawn and Lucille Ball – funny, and quirky and not afraid to look a bit ridiculous. Like, she loves to dance but she’s a terrible dancer!” Together the two compliment each other, says Patterson. “She’s pretty unpredictable but he’s able to keep things moving and from going too far off the rails. So he’s steady and she’s a bit disarming and that combination makes for some chemistry between them.”

Coming up in Season Two, Patterson teases, “We’ll have live animals, and some athletes like Shaquille O’Neal and Chris Paul from the Clippers. They’ll both surprise people, really. We also have Kaley Cuoco who was dying to do the show and she’s really fun.”

One thing that you won’t see on Lip Sync Battle is a star stopping down to plug their latest project, says Patterson. “Yes, many of them do it just before their movie or another project of theirs is coming out, but they don’t do ‘shout outs’ about it, we don’t show clips or anything like that. We don’t want to take away from the pure purpose of the show, and that’s to entertain people.”

Striving for a ‘cool factor,’ Patterson reveals that the series looks to another giant as an example. “We want it to feel like the magic you feel when you watch Saturday Night Live; that we’re having fun and not taking anything about it too seriously. If we’re doing that then I think we’ve succeeded, and truthfully, we can see by the reaction that we’ve has so far from the audience that we’re doing it right. So, we’ll keep the battles going as long as we can.” 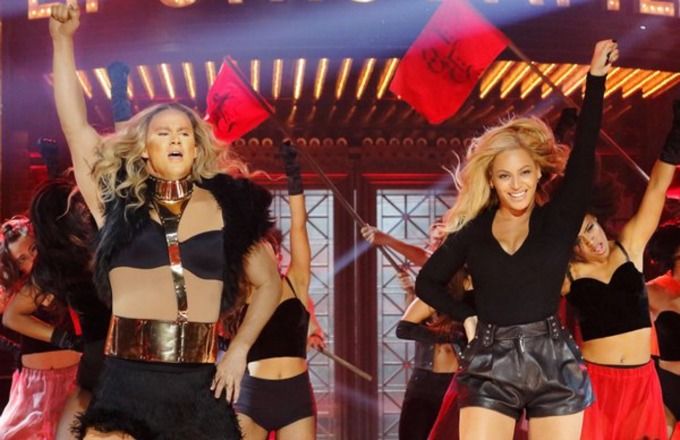