For the uninitiated, “noises off” is a theatrical term meaning distracting sounds in a stage production that are not supposed to be there, like commotion in the wings, loud talking backstage, or props crashing to the floor. In the hilarious new Broadway revival of Michael Frayn’s show business farce Noises Off at the American Airlines Theatre, there’s noise all over the place—so much, in fact, that sometimes the din threatens to overwhelm the play.

With the possible exception of Andrea Martin, who plays a dotty ham actress named Dotty Otley, who is playing the role of a bumbling housekeeper named Mrs. Clackett, nobody in this Roundabout production, directed by Jeremy Herrin, is in quite the same league as Dorothy Loudon and Brian Bedford, who made the original 1983 Broadway production something to cherish forever. (A subsequent production with Patti Lupone remains scarcely worth remembering at all.) But Noises Off is still one of the funniest plays of all time and you will not go away from this revisit with a frown.

In this brilliant farce about a dysfunctional stable of accident-prone amateurs fumbling their way through the English provinces in a disastrous tour of a silly sex comedy called Nothing On, everything goes wrong onstage and off that possibly can. Lines are dropped, pants fall off, doors jam, props get mixed up and actors collapse on both sides of the curtain, mixing up cues and resulting in a plate of sardines that appears repeatedly in all the wrong places.

Act One is the woefully under-rehearsed dress rehearsal, hours before the opening night curtain, which drives the frustrated director (Campbell Scott, handsome even in a catastrophe) closer to premature retirement. The second (and best) act is a matinee seen from the cast’s perspective backstage, replete with behind-the-scenes pranks, diabolical feuds and a door-banging rumpus so loud and chaotic that even the stage manager is reduced to tears. The chaos from the first act proceeds, but this time you see the reactions to it from everyone else’s point of view, including the technical team on the other side of the curtain. Act Three is devoted to a production of the play so ghastly that the door handles fall off, actors replace each other in the middle of a scene and everything collapses, including the set.

The intended farcical elements are the stuff of recurring theatrical nightmares. (A movie version with Carol Burnett and Michael Caine, directed by Peter Bogdanovich, made the dismal mistake of transferring the kinky fun of a British road tour to Des Moines, Iowa.) But the tackiness is perfectly in place again, and timing choreographed with enough precision to be a tribute to the farces of Georges Feydeau.

Among the colorful cast members who make it so are Megan Hilty as the squeaking, eye-batting ingénue who is always losing her contact lenses and dumbstruck with stupidity; Daniel Davis as the deaf and drunken old-timer who hides whiskey bottles all over the set and plays a burglar who can’t remember what he’s supposed to be stealing; and especially Ms. Martin, who does strange, riotous things with telephone receivers that fall apart, folded newspapers that refuse to fold and endless plates of those smelly sardines that are never where they’re supposed to be. To play farce with any real impact, an actor needs to insinuate and collate the elements of comedy and tragedy in equal measure. The actors in this production sometimes seem to only be playing surface emotions, and the “stage waits” between laughs feel interminable.

Never mind. Noises Off is still remarkable in its wicked manipulation of the human funny bone. Even when it seems labored, the laughs are foolproof. Sometimes the noisiest noise in Noises Off is the sound of the audience having a good time. 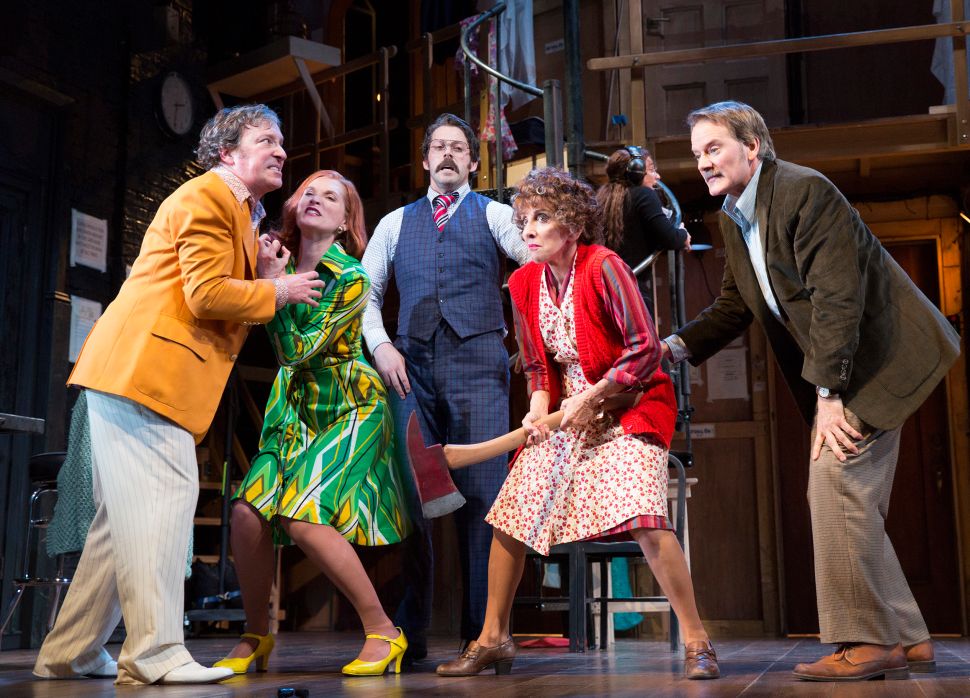