Names to erase from memory: screenplay writer Marc L. Smith and sibling directors Kevin and Michael Goetz, who have ill-advisedly taken it upon themselves to remake a third-rate 2008 French horror movie by Pascal Laugier called Martyrs, drain it of whatever quality it originally had about scientific experiments on children to determine how much torture the mind and body can stand, and reduce it to another slash-and-dice programmer with no redeeming factors whatsoever. It might appeal to lovers of extreme outrage who cannot wait to see how much the screen can show before driving an audience toward the exits fighting back nausea. Everyone else is warned in advance. Run in the opposite direction of any marquee showing Martyrs.

Opening scene: A young girl named Lucy escapes, bloody and scarred, from a dark basement cell where she has been held captive, and staggers into the sunlight for the first time in years. One month later, still in shock, she finds herself in an orphanage where she befriends only one other girl named Anna. On the rare occasion when she does speak, Lucy talks about being stalked by monsters. Ten years later, Lucy is still haunted by visions of pursuing creatures with hatchets and hypodermic needles.

Cut to an all-American family in a beautiful farmhouse, preparing breakfast and talking about normal things at the kitchen table. There’s a knock at the door. The father opens it to find Lucy, who blows them all to pieces with a shotgun. Joined by her loyal, lifelong friend Anna, she rolls the bodies into a ditch, but before the two girls can bury the corpses, a black sedan arrives to deposit a gang of mad scientists headed by none other than the distinguished actress Kate Burton. I’ve seen her on stages from Broadway to Williamstown Theatre Festival, brilliantly playing everything from Chekhov to Nora in A Doll’s House. What she is doing in this slaughterhouse is anybody’s guess. It’s no Hedda Gabler.

As the plotless story creepily moves forward, bits and pieces slowly emerge. Is a monster really stalking Lucy, then stabbing her with a jagged shard of broken glass just to watch her bleed, or is Lucy stabbing herself? Is Lucy an anguished victim, or a totally insane mass murderess? As poor Anna soon discovers by trying to help her hapless friend, these fiends are real and the farmhouse has enough cadavers to prove it. In fact the monsters are scientists who have, for some inexplicable reason, devoted themselves to torturing and killing innocent children in an attempt to find out what they will say on their deathbeds. The father in the farmhouse was the head lunatic. Now they have Lucy back in their talons, and her friend Anna, too. One thing is certain—Lucy is indestructible, even after she throws herself over the top of a staircase and splatters all over the bottom floor of the farm.

To make matters worse, Anna finds another little girl named Samantha chained to a basement wall with an iron bit in her mouth and a metal helmet bolted to her head. While Anna tries to rescue the new girl, Kate Burton burns Lucy alive at the stake! The rest of the movie devotes itself to a number of unspeakable horrors, accompanied by a lot of screaming and bleeding. “Martyrs are so rare,” Kate Burton tells Anna in a moment of forbidden candor. “They survive the pain and torture, and refuse to die. Martyrs endure the unspeakable sins of the earth and transcend their very being.” Lucy’s response: “Are you fucking crazy?” Be grateful for the occasional laugh line.

There’s more (oy vey—here comes the scalpel!) but I don’t think I could bear to describe it. You’ll just have to experience the beheading, the scalping, and an actual crucifixion on your own time. The film is devoid of any attempt to explain the bond between the two women as surrogate sisters, although a lesbian relationship is implied—the kind they turn out in Dickensian orphanages. Images exist for no other purpose than disgust and the cinematic equivalent of electroshock treatments in an asylum. It ends in a tsunami of carnage in which even Kate Burton finds herself in the middle of an unimaginable hell of torture and depravity. Her appearance alone earns Martyrs one star of approval if nothing else. The rest of the cast is best left anonymous; it is unlikely they will ever be heard from again. 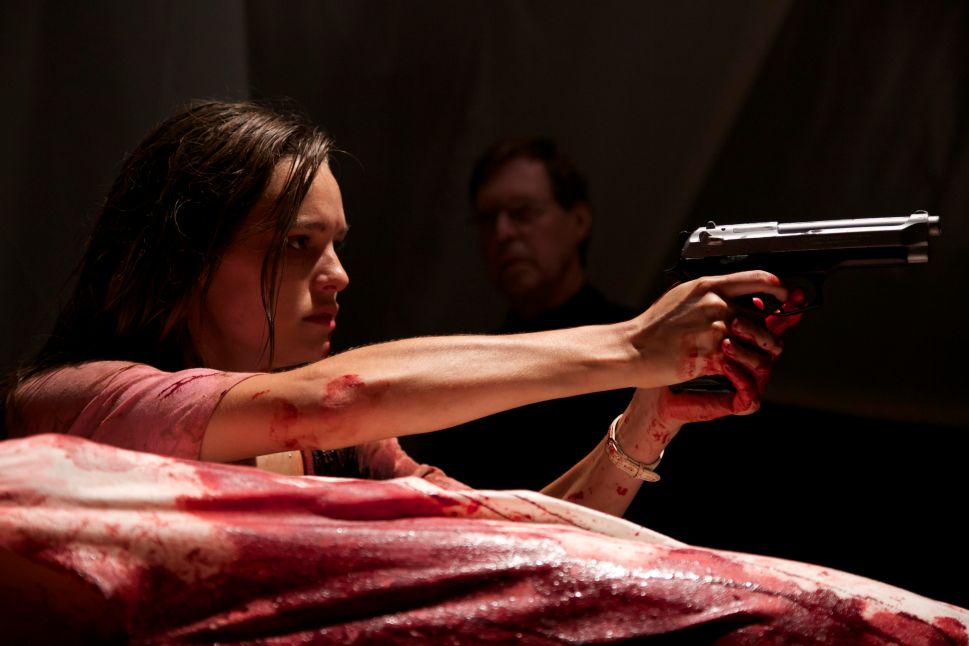