Season two of Marvel’s Agent Carter begins the same way season one did: with a sassy brunette in a red hat. But this time the brunette is Russian super-spy Dottie Underwood (Bridget Regan) dressed like everyone’s favorite SSR agent — Peggy Carter (Hayley Atwell) — and she and her goons are robbing a bank. Just when you think they might get away with it too, Peggy pops out of the safe with a rifle and gets into a showdown with Dottie, where she takes her into custody. And boom — we’re back in the game. These first two episodes were pretty fun. And they didn’t mention Captain America once!

The SSR’s new west cost chief Daniel Sousa (Enver Gjokaj) is in Los Angeles, and let me say that he’s never looked better, though his Cali wardrobe is pretty hilarious. The SSR gets called in to help the LAPD because there’s a frozen lake in the middle of a heat wave and a dead girl at the bottom of it. But Sousa is the only agent in LA and he wants backup for what he thinks will be a huge, high profile case.

Thus the east coast chief, Jack Thompson (the very angry Chad Michael Murray) sends Peggy to the west coast, interrupting her Dottie interrogation. The main reason he does is because he thinks this will annoy Sousa and Peggy, which doesn’t give me much confidence in his leadership abilities. And then he proves incapable of interrogating Dottie — whose lipstick remains perfect while in custody — before the FBI swoops in and takes her away, so all in all, not a great day for him.

Meanwhile, everyone’s favorite sassy butler Edwin Jarvis (James D’Arcy) has also moved to Los Angeles because Howard Stark (Dominic Cooper) has decided to start making movies. Unlike Sousa, Jarvis has not changed his wardrobe at all, and he’s annoyed that Californians “eat avocados with everything.” Never change, Edwin. When Jarvis brings Peggy to the Stark mansion, Peggy finally meets his wife, Ana Jarvis, who last season seemed to maybe be a figment of his imagination. She’s real and has a bizarre accent. And she makes Peggy a gun-holster garter belt, so she might be OK.

Meanwhile at the SSR, Rose, the adorable receptionist, has also made the trip to L.A. I hope she’s an agent by the end of the season, because she’s got spunk. Peggy apparently was trying to get together with Sousa and he didn’t return her calls (in twenty-first century terms, he ghosted). That’s because he’s got a girlfriend. Sousa is handsome, but Peggy is clearly better than Sousa, so this isn’t that tragic.

But back to our Jane Doe, who’s not only frozen, but glows in the dark. The dumb LAPD detective Sousa and Peggy work with keeps trying to stop them from following leads, as his main investigatory strategy is to leak the story to the press. This is so ridiculous it’s clear that he’s up to no good. Later he’s outright racist toward hot black doctor James Wilkes (Reggie Austin), so you can tell he’ll be gone soon.

Right, racism! Season one (rightfully) faced criticism from fans for its very white cast, but this season adds hot Dr. Wilkes, a scientist at Isodyne labs, where the dead girl — he tells us her name, Jane Scott — worked. Rumor has it she was sleeping with the boss, Calvin Chadwick (Currie Graham), who’s also running for Senate. It’s clear from his first moment on screen that Wilkes is supposed to be her new love interest, but Peggy seems sort of uncomfortable about it. It’s unclear if this is because, as Peggy says, he’s a person of interest, or if because Peggy might be a little racist herself.

Peggy and Jarvis go to feel out Chadwick and his wife, actress Whitney Frost (Wynn Everett) at a horse race, where Jarvis poses as an executive at Stark Pictures Productions and Peggy impersonates an American. I love when British people do American accents, so this was great. Chadwick gets defensive very quickly, joining the other characters doing a bad job hiding their evil intentions

It turns out the detective killed Jane under Chadwick’s orders, freezing her since exposure to some stuff at Isodyne is causing him to slowly freeze as well. Peggy tells everyone not to shoot him, and then an officer does, claiming he didn’t hear the order, which is a weak excuse. He did it on Frost’s order, because this is an equal opportunity show and women can be just as evil as men. The episode ends with a shot of some evil-looking, dark stuff at Isodyne, which looks like it could be related to the evil-looking, dark stuff on “Agents of S.H.I.E.L.D.” but apparently is not.

Then episode two starts, and to make the transition as awkward as possible, ABC plays a “previously on” montage of all the things we just watched, in case you blacked out during the commercial break. But they made up for it by opening with Jarvis lifting weights in a hilarious leotard, so I’ll forgive them. Peggy, meanwhile, meets Sousa’s cute nurse girlfriend, Violet and they hit it off, because Peggy is perfect. She finds out that Sousa is going to propose to Violet tonight, though of course that is literally never going to happen. At least not in episode two.

Chadwick, our evil business owner/politician, is attending a Hydra meeting. They never say it’s a Hydra meeting, but their matching lapel pins — like the one Dottie was trying to steal from the vault — look just like the old Hydra logos seen on S.H.I.E.L.D. this season. But really whenever there are a bunch of old white dudes around a table in the Marvel Universe, it’s probably Hydra. They want to get rid of the black stuff — it’s called zero matter — because they think it’s too dangerous and with the murder there’s too much attention on Isodyne. When Chadwick tells his wife the plan to dump it that night, she is silently seethes, which is fun to watch.

Hot Dr. Wilkes has decided that he is maybe willing to work with Peggy but first she has to meet him at a dance club that Sousa tells us is for “coloreds.” 1947! Adorable! Jarvis hooks Peggy up with Howard’s sex car for the evening, which is hilarious. Marvel should make a web series of Howard’s exploits.

After some initial hesitation and some cute slow dancing, Wilkes tells Peg what’s going down. The zero matter was found when an atomic test during the war accidentally created this crack that sucked in everything around it and left the zero matter on the ground. Now they want to use it as an energy source. It sucks all the energy from around it — hence the frozen people. Peggy and Wilkes decide to go to Isodyne to get it before the evil people do, but they’ve been found already and a chase ensues. Peggy sends an SOS to Jarvis, so Sousa cannot go propose to his girlfriend because he has to help Peggy. But first he has bang his crutch against some furniture while yelling, because, as perfect Rose points out, he’s definitely not in love with Peggy. Meanwhile, Peggy and Wilkes share a kiss before stealing a car and heading to Isodyne.

As Peggy fights goons (one of her greatest talents), Wilkes gets the zero matter into a container. But Frost is there and the two clash. The zero matter falls to the ground and explodes, seemingly killing them both. When Sousa arrives, he’s distraught because he thinks Peggy, who again, he’s definitely not in love with, is dead, but she’s fine, though shaken. Violet brings Sousa some pastries because she’s adorable, and he almost proposes, but doesn’t. Violet seems too innocent to last long in this world.

Cut to Frost’s dressing room, where she, of course, is alive, but appears to have the zero matter inside her, and it’s cutting through her face. Probably not great for her acting career. No word on Wilkes yet, but there’s no way he’s dead. Let’s hope he uses whatever super powers he inevitably gained for the good guys.

This premiere left us with lots of questions but none more important than this: Where is Angie Martinelli, Peggy’s old roommate/best friend? Please tell me she’ll be on the West Coast soon. 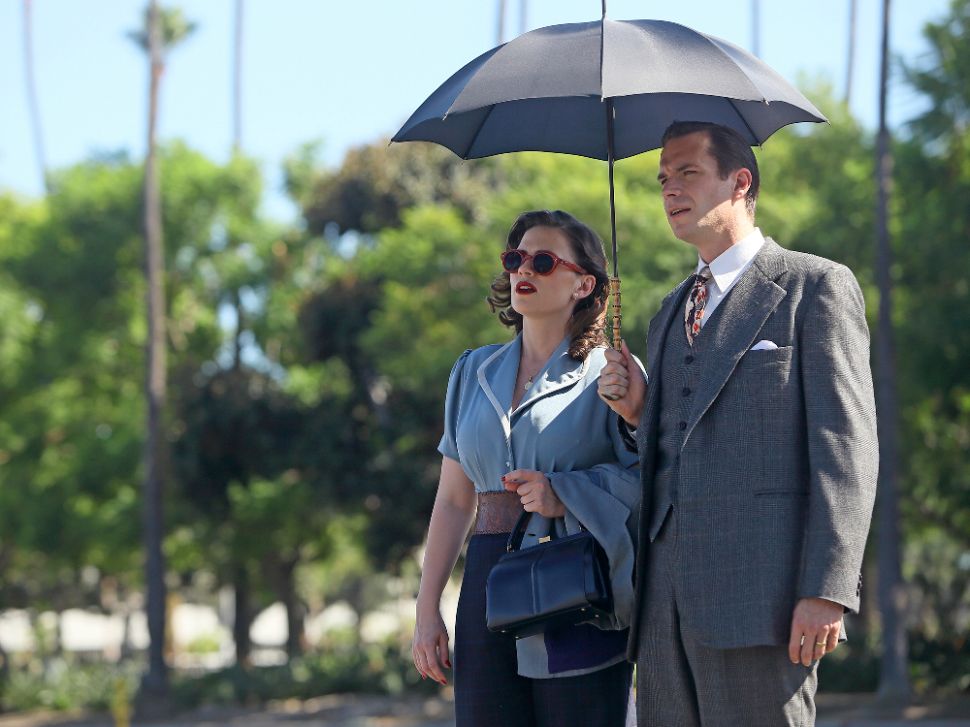