Before episode three of Agent Carter began, I wrote down three questions I wanted answers to. Is hot Dr. Wilkes dead, will Chad Michael Murray — I’m sorry, Jack Thompson — make it to Los Angeles soon, and when will we see Angie? And two of these questions were answered in this episode, which was funny, twisty, and fast-paced.

The episode begins with Peggy meeting Sousa at Dr. Wilkes’ house, with the press hounding them outside. Like last week’s premiere, this episode talked a lot about newspapers and the way they manipulate public knowledge, so I wonder if that will come back in a plot point later on or if it’s just a theme the writers are playing with — in L.A., the press is always watching. Anyway, Dr. Wilkes’ house has a secret trap door with money and a Russian passport, but Peggy and Sousa, thankfully, see through this attempt at setting up the doctor as a Communist.

Peggy and Jarvis decide instead to seek out another beloved supporting character who has been MIA: Howard Stark. Peggy makes fun of his movie’s source material — “A movie based on a comic book? Sounds like a terrible idea.” She talks to him about Dr. Wilkes, who also had one of those pins for the club that is probably Hydra. Howard points out that he likely wasn’t a member of the club because they like to keep it “pale and male.” Howard himself has rejected membership a few times.

To make matters worst, Thompson has in fact arrived in Los Angeles to push the Wilkes situation under the rug. He wants to file the report saying Wilkes is a Communist and move on, but Peggy and Sousa are vehemently opposed. This is relevant to nothing that happens, but Sousa has a Brooklyn Dodgers hat in his office, and I smile every time I see it because I love baseball and good world-building.

Peggy does what Peggy does, and she gets Howard Stark to bring his army of hot production assistants to the club to create a distraction so she can sneak around and bug the place. This involves Howard annoying the stuffy guy in charge of the club, which is involves him implying that he tried to have sex with Eleanor Roosevelt.

Peggy uses the feminine chaos to explore and finds the evil guy meeting — the Council — just as they’re breaking up. Her bugs don’t work, but she finds copies of tomorrow’s newspaper on the table. Apparently the Council told the incumbent senator to resign or they’ll ruin him with a sex scandal, either way opening the door for Chadwick to be senator. Peggy almost gets caught running away, but covers by telling the security guard, in her finest American accent, “I’m so sorry, I get really confused around books!” It is glorious.

Peggy and Sousa bring this info to Thompson, who yells at them for not having solid evidence. She accuses him of always “burying an ugly truth and hoping someone will pin a medal on [him],” which is a pretty accurate description of his actions, since he just keeps listening to his mentor, Vernon Masters, who is clearly nefarious s. How Thompson got in charge with such horrible instincts, we’ll never know (just kidding: it’s because he’s white and male and able-bodied).

After Thompson tells Peg to head back to New York, she and Sousa have a little heart-to-heart where he points out that she needs to go rogue less frequently. But then they realize all the metal objects near her are floating and they run to Howard, afraid that Peggy is slowly freezing because of the zero matter. But no, the gravitational field around her has just been distorted. Simple, really.

Howard sprays some chemicals in the air, comparing it somehow to a photograph’s development. This seems like bullshit TV science but it doesn’t matter because what does the spray reveal but HOT DR. WILKES. What a good, genuine surprise. Once they establish that he’s not dead, just non-corporeal (of course), Wilkes and Howard become the OG science bros, which the former is honestly touched by, though it’s a little weird to see Howard be so kind when we know how strained his relationship is with Tony in the future. These moments between Wilkes and Howard and Wilkes and Peggy come off as really genuine and are wonderful to watch. I like what they’re doing with the love triangle with Peggy, Sousa, and Wilkes, in that they’re not leaning into it too hard, but the tension is still there in their interactions. Sousa’s almost-fiancé (and Jarvis’ wife with her weird accent), it should be noted, was absent for this episode.

Meanwhile, Peggy goes off to visit Whitney Frost, our evil lady full of zero matter, who is having some issues. Earlier, she asked her husband if she could retire, which he brushed off. I guess even in the best relationship it’s hard to tell your husband you need to quit your job because your face is oozing a black substance from another dimension. Peggy doesn’t get any info from her, but she does freak her out, so much so that Whitney convinces her husband to try to whack Peg. The assassin, of course, is no match for the combined powers of Peggy and Jarvis, though. Later, Sousa reveals that Whitney Frost is actually an incredible genius named Agnes, the real brains behind the Isodyne operation. Peggy expertly summarizes: “Every eye in the country is on her and no one sees her.” 1947, man: not a great time to be a woman, whether a spy, super genius, or actress.

Meanwhile, Thompson’s mentor returns to get the tape of the zero matter exploding, which he gives over because he is the worst. Masters tells him, “If it was up to me you’d get a medal for this,” invoking Peggy’s earlier rebuke, but Thompson doesn’t even seem to put this together. The next day, instead of returning to New York, he goes to the evil club with Masters where he sees the exact paper that Peggy had described and finally believes her. This character is really the only thing about this show that is not working for me. I get that they want Peggy to have an adversary at work, but Thompson’s motivations and loyalties seem inconsistent.

We end with Whitney in her dressing room, trying to cover the crack in her face with makeup. I can’t even cover a pimple with makeup, so she should have realized the uselessness of this task before she began. Her director comes in to try to emotionally manipulate her into sleeping with him and she tries to fight him off. She accidentally uses the zero matter to absorb him into the palm of her hand. It’s really cool to watch and also terrifying. Whitney is appropriately horrified at this new power as the crack on her face opens more. A shot of her in the previews next to a gold drama mask forecasts her future — as the super villain Madame Masque, known for the gold mask she uses to hide her scarred face. I have a feeling she’ll be absorbing some more people in the future. 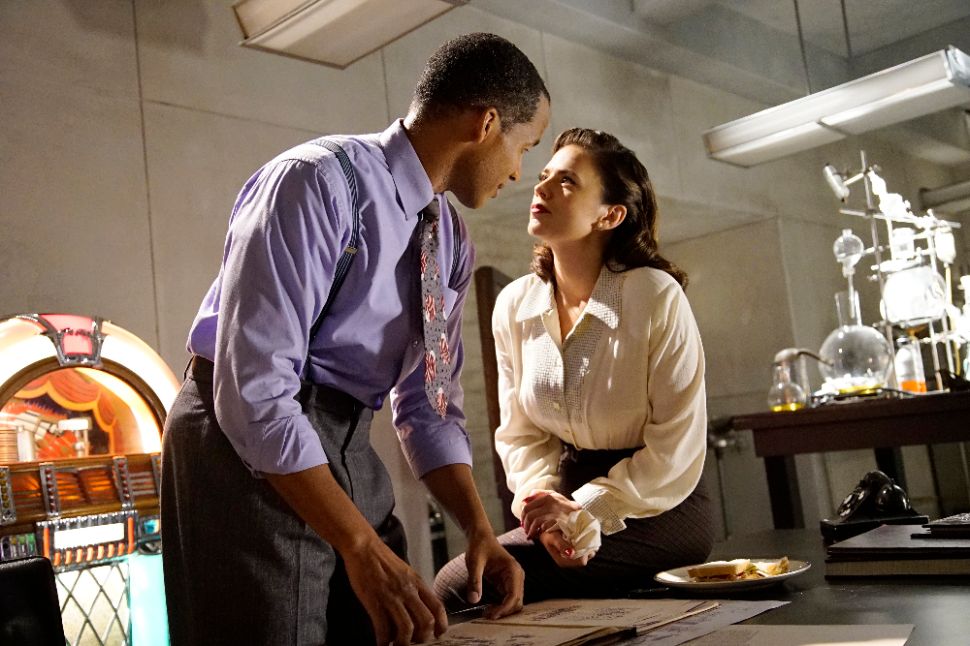