The holidays may be over, but legendary tap dance king Maurice Hines is still handing out Christmas presents, and his gift to the New York theater scene, a dazzling syncopated musical called Tappin’ Thru Life, is a lot more fun than New Year’s Eve in Times Square. Accompanied by the Diva Jazz Orchestra, a nine-piece all-girl band that swings as hard as Count Basie, the star looks dapper and much younger than his 72 years, and when he sails onstage to tumultuous applause, telling the sold-out house at New World Stages he’s just warming up his taps, it’s immediately clear they are hot enough already. It’s also clear that the talisman he lives by is pure, heart-stopping rhythm. You go away with a newfound bounce you didn’t have going in.

Mr. Hines is not only a master of the kind of show-biz terpsichore perfected by Bill “Bojangles” Robinson and the Nicholas Brothers, but an accomplished jazz singer, too. He scats. He croons. He shuffles his hips, swings his torso and sings a thrilling “Everyday I Have the Blues” the way he first heard Joe Williams do it at the Apollo Theatre in Harlem. And he is always keeping time, even when he demonstrates how he and his younger brother Gregory wowed The Jackie Gleason Show before they were 10 years old with their show-stopping “Ballin’ the Jack,” choreographed by their grandmother, an original showgirl at the Cotton Club who “dated Cab Calloway, and then Duke Ellington, and then found Jesus.”

This show is an autobiographical compilation of such highlights, from a life and career filled with star-spangled memories. The set design by Tobin Ost is nothing more than a scrapbook of photos and film clips, projected on panels that move in and out of the action, showing him, and other family members—including his brother, who was three years younger and his dancing partner for most of his life, his father who joined them when the act changed its name to “Hines, Hines & Dad,” and especially his beautiful mother who acted as the wise and compassionate glue that kept them all together in good times and bum times alike. The patter skillfully recreates a bygone era when he shared the stage with Judy Garland, Frank Sinatra, Lena Horne and many others, bringing back to life a culture that remains forever timeless.

Some of the reminiscences are heartbreaking, but never cloying. An early example of the kind of bigotry show-biz kids learn earlier than other kids do involves Tallulah Bankhead, who was headlining at one of the swank hotels in Vegas when the Hines brothers visited her. Just a kid who didn’t know the rules of the game yet, Maurice jumped into the hotel pool and the hotel manager went apoplectic. “Throw him out and I will not go on tonight,” barked the imperious Tallulah. But as soon as Maurice’s mother rescued him and Bankhead left the scene, the manager drained the pool. He’s got a bushel basket of stories like that, and the clever way he layers them gives the show a finer tune than most one-man shows. With his smooth, relaxed vocal style, he recreates “I Can’t Give You Anything But Love,” the song his dad sang to his mother on their first date. And with a sweet candor, he discusses for the first time the taboo subject of his 10-year estrangement from his kid brother Gregory and shows footage of the two of them dancing again for the final time in Francis Ford Coppola’s 1984 film The Cotton Club. His celebrated sibling died in 2003, at 57.

Devoted to helping a new generation of dancers get their own piece of the center spot, his solo numbers are bolstered by two sets of terrific dancers Ann Miller would call “tops in taps”—the Manzari Brothers and a rotating pair of teenage girls selected from auditions who keep the action moving at breakneck speed. He calls it “passing the torch,” but it also gives him a chance to catch his breath and renew his vigor offstage just long enough to come back on fresh as a new sequined tux. Candid and heartfelt, libidinous and rubber-legged, Maurice Hines uses every inch of his space with no waste to spare. He even lights up the stairs behind him like the steps in the big “I’ll Build a Stairway to Paradise” number in the Vincente Minnelli musical An American in Paris—all colorfully and cannily guided by ace choreographer-director Jeff Calhoun in a structured production that never lulls.

The key word is rhythm, and you’ll have to look long and hard to find this much bang for the buck anywhere else on Broadway. 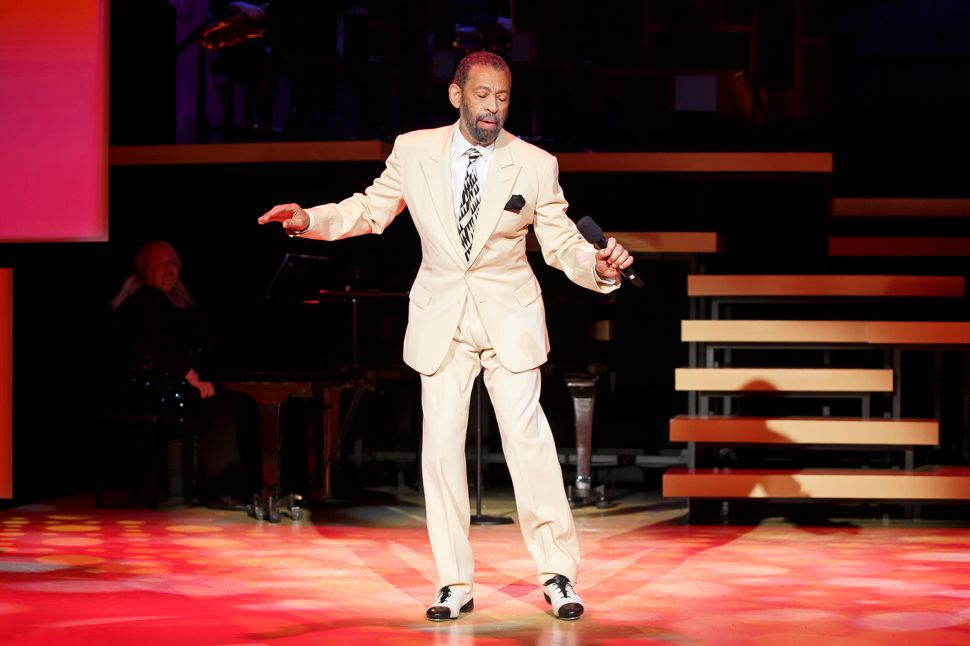