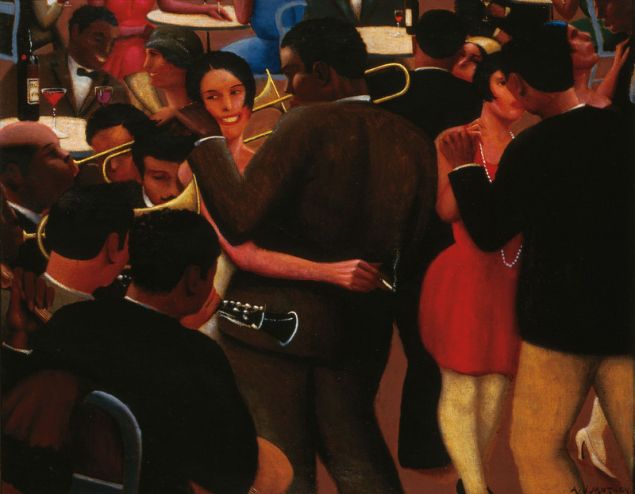 The Whitney Museum of American Art has two big shows right now, on Frank Stella and Archibald Motley. I must confess that I had a lot more fun, and you might, too, at the surprising and rich, almost joyful, “Archibald Motley: Jazz Age Modernist,” which is closing this Sunday, January 17.

This isn’t to say that Archibald J. Motley, Jr. (1891-1981) wasn’t a serious artist. Indeed, my first exposure to him — “Two Centuries of Black American Art,” a LACMA exhibition catalog by David C. Driskell from 1976 – was weighty indeed.

Its entry on Motley includes full-page reproductions of two paintings that deserve to be taken seriously. One is Mending Socks (1924), showing the artist’s aged grandmother engaged in humble domestic labor. The other is Brown Girl after the Bath (1931), a depression-era study of a nude seated pensively in front of a mirror, the mirror alluding to Renaissance portrayals of Venus surveying her own charms.

Both are rendered with traditional finesse, and are among the 41 oils painted between 1921 and 1963 that comprise the Whitney’s homage to this African-American painter—one frequently associated with “the Harlem Renaissance” though he never lived in Harlem. 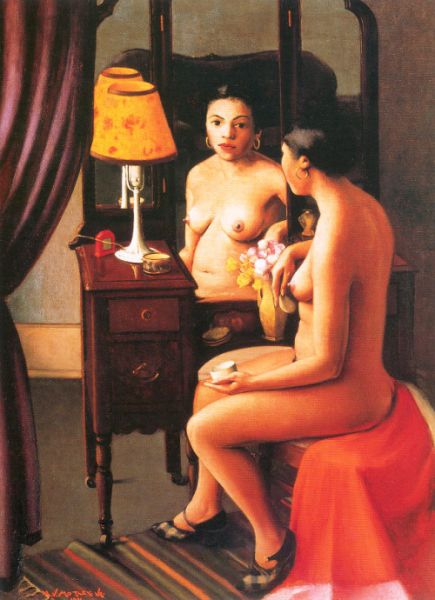 Less seriously, and later in the Whitney show, there appear crowds of people, Parisians and Chicagoans enjoying themselves – in a street, in a café, at the entrance to the famous Jockey Club – and most memorably, gyrating to “le jazz hot” in a night club with mixed-race musicians – and dancers.

The catalyst for this joy appears to have been a year that Motley spent in Paris, after he’d won a Guggenheim Fellowship to study there in 1929. He seems to have become aware of how life in the cafes and cabarets had been so lovingly limned by Manet, Degas, Renoir, Toulouse-Lautrec, even the early Picasso — and adapted it to his own style and subjects.

Motley was born in New Orleans, and raised in a mostly white neighborhood of Chicago by a mother who had been a teacher before she married, and a father who worked as a Pullman porter.

After attending public schools, he studied at the School of the Art Institute of Chicago between 1914 and 1918. Then he embarked upon an artistic career in Chicago that appears to have consisted initially of somber, dignified portraits of members of his family, friends and presumably professional models.

The first two galleries of this exhibition are devoted to 13 such portraits. Some reveal the artist’s fascination with the many different degrees of racial intermixture, though the terms for it employed by Motley sound archaic today. 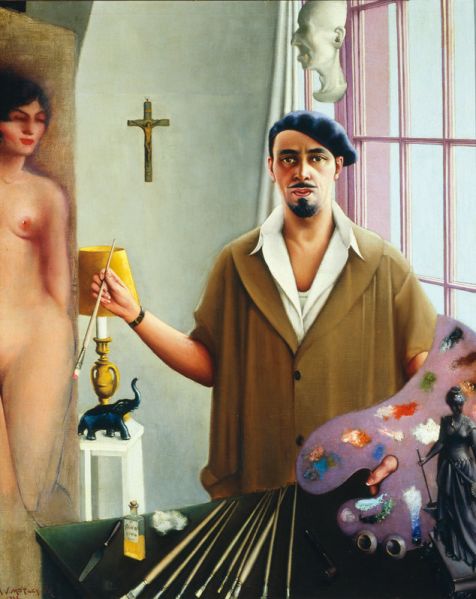 One such painting is entitled Mulatress with Figurine and Dutch Seascape (ca. 1920); another is The Octaroon Girl (1925).

Not least among the portraits in this part of the show is a deft little self-portrait from about 1920, showing the artist posed simply but formally in a jacket, tie, and no distinguishing characteristics beyond a paint brush, a palette – and a stylish small mustache.

Also touching are two portraits of his wife, one nude and one very fashionably clad. Born Edith Granzo, she was Motley’s high school sweetheart, but when they married in 1924, her German immigrant family disowned her.

It is in the last three galleries of the exhibition that the joy breaks out, seemingly unconfined. Here are 28 paintings that are almost all genre scenes, depicting dozens and even scores of vigorously rendered, guilelessly joyful little people mostly having themselves a whale of a good time.

The style is modern but not too modern; the figures are simplified but not simple. The colors are jewel-like, bright but not gaudy. And these characteristics (with only very occasional lapses) all work very well together. 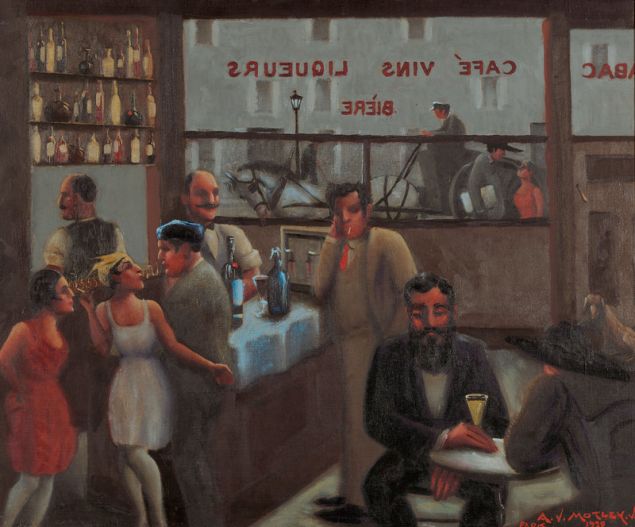 The festivities, moreover, continue in his portrayals of night life in “Bronzeville,” a Chicago neighborhood that was a particular haven for recent African American immigrants from the South.

Despite the occasional “serious” subject, such as a farmer leaving home, or an argument of some sort, the overwhelming emphasis is on people – almost always African Americans – engaged in the pursuit of pleasure.

Thus we have wild dancing in Saturday Night (1935), children playing in a Playground (Recess) (ca. 1940), and nearly-nude burlesque dancers relaxing Between Acts (1935). There is a picnic, a barbecue, a carnival, and even religion becomes an occasion for orgiastic gesture, in Tongues (Holy Rollers) (1929). 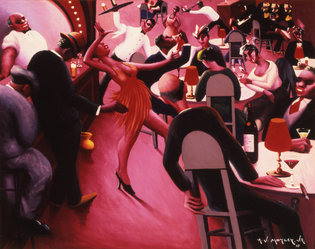 Particularly well-organized and powerfully-painted are three scenes of men hung in a row. All these men are sitting around a table and engaging in various pursuits: The Plotters (1933), “The Boys in the Back Room (Card Players) (ca. 1934), and The Liar (1936).

In his old age, Motley spent a lot of time in Mexico with his nephew, Willard Motley, the writer. He painted some more peaceable Mexican scenes, and, when he essayed a reprise of his earlier night-life subjects, his colors became hotter and his images yet more simplified — as in Hot Rhythm (1961).

Call me cornball, but I liked seeing so many people enjoying themselves. I realize there is a serious undercurrent even here: few of Motley’s subjects would have been able to enjoy themselves all of the time as they do in his pictures.

Still, “carpe diem” is a very worthy concept that goes back to ancient Rome. What Motley was able to do was re-situate it brilliantly in a different, more modern place and time. 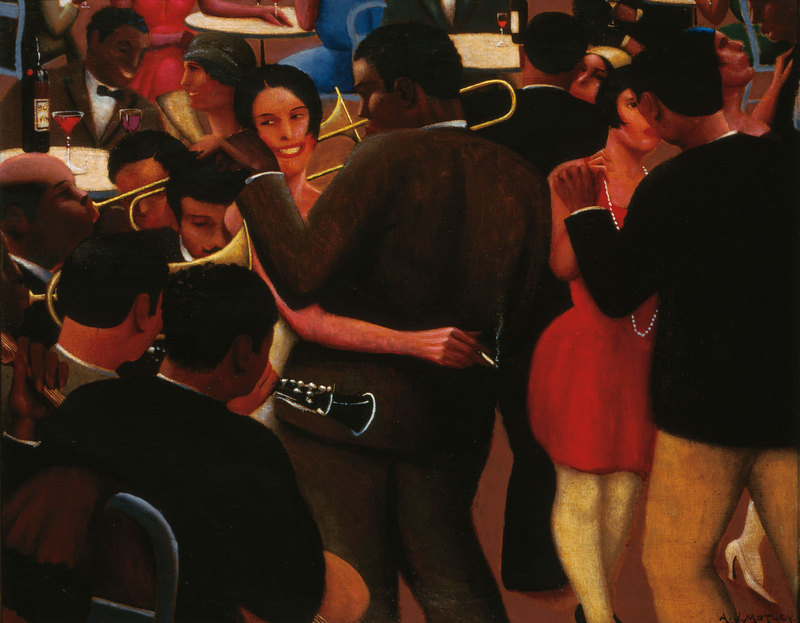