Already plagued with a surfeit of January junk, there’s more this week. Posing as a bogus thriller without one line of believable dialogue or one single thrill, Mojave is 93 minutes of gibberish with guns and phony literary pretentiousness about two thugs in a duel of weapons and words that goes nowhere fast.

Unbelievably, writer-director William Monahan once won an Oscar for writing the Martin Scorsese film The Departed. He has written nothing of value since, and as a director he evokes gales of guffaws. Mojave is the kind of wreckage that reminds you they make too much money in Hollywood and don’t know what to do with it. So they finance bad movies like this one for…what? Tax write-offs? The IRS should launch an investigation.

Mojave is about an “artist in crisis” named Tom, played by Garrett Hedlund, a poor man’s road company Brad Pitt, a former model who wears Steve McQueen Ray-Bans and mistakes mumbling for acting, and a bit of a layabout who desperately needs a good haircut. It is never revealed just what Tom does to justify the “artist” label. Something to do with movies, I guess, although nothing specific. Equally hidden from the viewer is the reason why Tom is so unhappy. He works out of a soulless crash pad in the Hollywood hills and has a producer partner named Norman (Mark Wahlberg in a baffling and pointless cameo consisting mostly of telephone calls), a former drug dealer surrounded by prostitutes and booze.

The movie begins with narration by Tom, who says, “I’ve been famous in one way or another since I was 19—and you get tired. You want to be like Byron. You want to go to Greece. You want to run guns in Africa.” Of course he does none of those things. What he does is ignore his answer machine (“Are you dead? Will you let me know?”) and drive to the Mojave desert where he contemplates suicide, chain smokes, swigs back a bottle of whiskey and smashes up his Jeep. A well-read, unemployed drifter named Jack (Oscar Isaac) appears out of nowhere using words like “denouement,” warms himself by Tom’s campfire, talks about Jesus and Moby-Dick, and quotes Shakespeare.

Jack turns out to be a homicidal maniac with a high-powered rifle. Tom steals the weapon, kills a Mexican policeman with it, then smashes up the gun and leaves it behind to implicate the stranger before he heads off into the blistering desert on foot with the insane Jack in hot pursuit. Miraculously, Tom finds his way back to Hollywood where he gets running but no haircut and beds a French woman (Louise Bourgoin) who is starring in a production of Shakespeare’s Tempest, even though she can hardly handle a simple declarative sentence in English. She gets some of the funniest lines, even though she has trouble saying them coherently. When Tom warns her they are being hounded by a lunatic assassin, she retorts, “A stalker? I have 27 of them, and that’s not counting the ones in jail.”

While the cops back in the Mojave piece together the missing rifle Tom smashed, Jack arrives in Hollywood, murders a man walking a poodle, steals his car, declares himself an incarnation of Mephistopheles, and ends up with the poodle, which he ties to a pole in the middle of the traffic and then guns down Norman, clad only in a towel, whom he doesn’t even know. None of this makes one lick of sense, especially when accompanied by dialogue like this: “Ambition has a funny way of driving you toward things you never wanted to win because you’re just a man—you’re just a bag of dangerous chemicals—and you can’t stop. So you go to the desert to find out what you want and what you are—if anything at all.”

And: “Everyone says Hollywood is dangerous. You were the one who said what was wrong with Fitzgerald, that he couldn’t write screenplays.” Or how about: “This started in the desert. It’s gonna end there, brother. This has to play out. It’s never gonna be the cops, brother. They can’t do the math. It’s you and me, in the desert.”

Oh, no! Worst fears realized! It’s back to the Mojave. And a game of Russian roulette. And one final comic-book toast from the philosophical weirdo Jack: “To Death—and its raven wing. There’s a fucker walkin’ around here with a hook and an hourglass—the Gentleman himself. Unless he doesn’t have a fistful of cancer.”

In the futile and ponderous finale, one person is still alive. I won’t reveal who it is, just in case you are still awake. I will simply tell you that if you do wait around for the bloodshed and hellfire that concludes Mojave, you will not only have survived the worst movie of the still-young new year, but you will, in the process, have also learned a new definition of the word “masochism.” 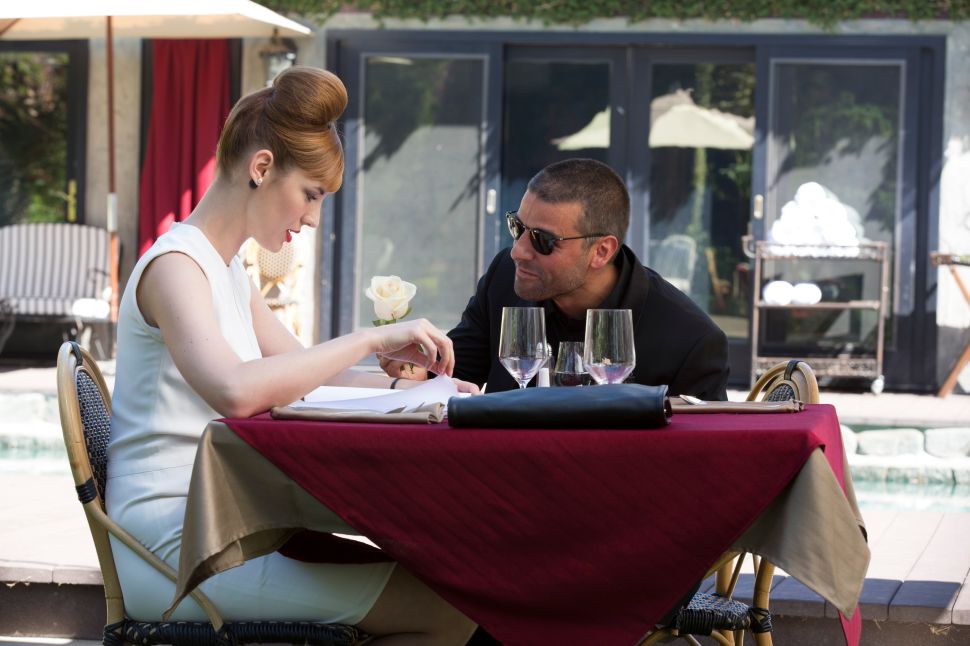