Dr. Lisa Levy is an artist, performer and “self-proclaimed psychotherapist.” And she has had enough of the art world’s bullsh-, er, fallacies.

It all started one night when Ms. Levy came home from a particularly vapid art show.

“I was really pissed and aggravated about the pretense, competition and the amount of bullshit in the art world,” Ms. Levy told Bushwick Daily.

This naturally led her to the idea for a performance piece titled The Artist is Humbly Present, in which the artist will sit naked on a toilet for two days.

The performance will take place at the Christopher Stout Gallery from 1-6 p.m on Saturday and Sunday, January 30 and 31.

In case you are someone who doesn’t pay much attention to art, Ms. Levy’s title is a not-at-all-subtle reference to Marina Abramović’s durational performance piece that took place at MoMA in 2010 titled The Artist is Present, in which the artist sat motionless in the museum for 750 hours straight while museum goers took turns sitting across from her.

Ms. Levy, on the other hand, will sit on a toilet motionless for ten hours—naked—and she’ll take breaks. Spectators are invited to sit on a toilet opposite from Ms. Levy and engage with her (though touching the artist is strictly forbidden).

You might think it’s odd to negatively critique something by emulating it and thereby expanding its influence, but… don’t think too hard on it.

While Ms. Levy claims the piece is “kind of a joke,” as well as a “social experiment,” we think she should perhaps leave the jokes to Aziz and the experimenting to real doctors. 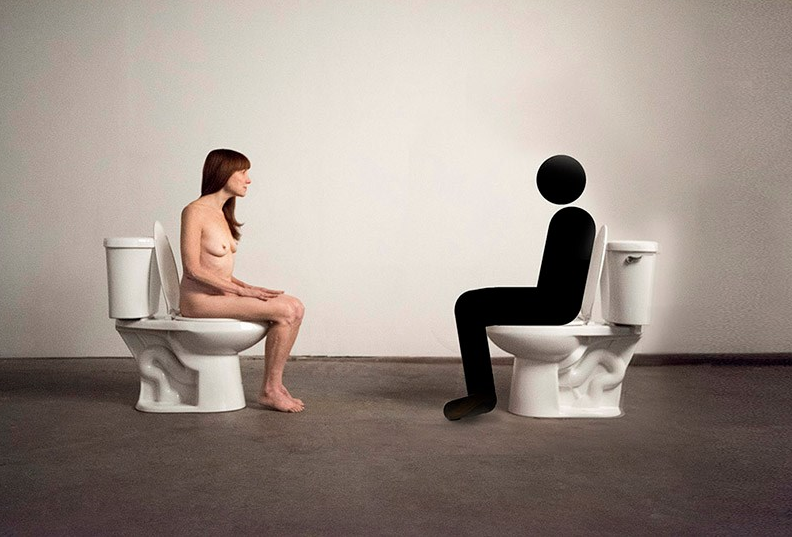