It’s been five and a half years since NBCUniversal fired co-chairman of entertainment Ben Silverman—the sitcom wunderkind/enfant terrible who ushered in the era of The Office, Parks and Recreation and 30 Rock—and the network has lost much of its comedy cred. No longer can it claim Thursday as its “Must-See TV” night, and its offerings of yucks pales in comparison to broadcast competitors at Fox (New Girl, Brooklyn Nine-Nine), ABC (Modern Family, black-ish) or CBS (The Big Bang Theory, 2 Broke Girls).

Since Mr. Silverman departed, there’s also been an increase in stiff competition that didn’t even exist a decade ago: cable stations like FX (It’s Always Sunny in Philadelphia, You’re the Worst, Louie), IFC (Portlandia) and streaming platforms like Netflix (BoJack Horseman, Master of None), Hulu (The Mindy Project) and Amazon (Transparent).

So, on January 7, NBCU will launch one of its most ambitious projects to date in an attempt to win back the millions of comedy nerds that they’ve lost to other “content providers”: a new ad-free streaming channel called Seeso, which is, essentially, an app.

For the “low price” of $3.99 a month (“less than the price of the latte!” its promotions claim) subscribers will gain access to a gigantic library of newly remastered hits—Kids in the Hall, Monty Python’s Flying Circus, Fawlty Towers—as well as next-day viewings of NBCU’s current late night programming and all 40 years of Saturday Night Live. In addition, Seeso will launch with a huge slate of original content, more shows than all the major networks launch in the fall put together.

It’s unprecedented and risky for a major network to get into the streaming business, competing for eyeballs with the likes of Amazon, Hulu and Netflix…to say nothing of its focus on a niche audience obsessed with comedy. Evan Shapiro, NBCU’s EVP of digital content, is the ace up the network’s sleeve.

“We’re doing 22 original series, and that doesn’t include the eight to 12 comedy specials or the 365 daily pieces of exclusive stand-up,” said Mr. Shapiro. A veteran executive with an eye for comedic talent, Mr. Shapiro brings impressive credentials to his new job and is launching the service with 20 full-time staffers…some of whom come directly from the competition. “Which is kind of amazing,” he said, “when you think I started a year ago.”

Mr. Shapiro is in his mid-40s but looks much younger, with a boyish face and an impressive silver pompadour that is his most distinguishing feature. He’s an interesting mash-up himself: part creative, part network exec, part programmer, part marketer, and all fanboy.

“I was one of the original latchkey kids, first generation to grow up watching Sesame Street,” he told me in Seeso’s hip Soho office. He attended the University of Massachusetts Amherst majoring political science, but spent his days as a dilettante of the theater world: writing, directing, acting and singing, but also resurrecting the UMass Theater Guild. He got married to a girl from his high school and moved to New York to immerse himself in entertainment: working at nonprofits by day and putting on reviews in small Lower East Side theaters at night. Notably, Mr. Shapiro wrote a play called Bondage, in which James Bond attended therapy sessions and sang about his one-night stands in the tune of the Bond themes.

“It was based on that Family Ties episode, ‘My Name is Alex,’ ” Mr. Shapiro said, going on a five-minute tangent about the importance of that particularly seminal episode.

After a successful stint marketing for the Public Theater, and co-founding his own agency, in September of 2001, he went to work for CourtTV. Three years later, he would be running IFC and Sundance Channel, after a stint in marketing that brought IFC its first Emmy nomination for Dinner for Five. Then, in 2009, Mr. Shapiro took a meeting with Fred Armisen and Carrie Brownstein about a sketch show.

“They came in and pitched these low-res videos they had made in Portland,” Mr. Shapiro recalled. He urged them to skip a standard sketch show and hone their thesis—“a celebration/takedown of hipster-ism”—to a locale. He remembers pointing them to Gary Larson’s Far Side cartoons for inspiration.

“When you look at the cartoons, what you realize is they all take place in the same neighborhood…actually a hillside in Seattle, where he’s from,” Mr. Shapiro told me. “That was basically my only note for the show: the main character should be Portland.”

‘I think we’ve passed a point where demographics matter,’ said the network executive

On the strength of Portlandia, which won IFC an Emmy, it rebranded itself, acquiring a half-dozen humor series along the way. In 2012, Mr. Shapiro moved to Participant Media as its president of TV, becoming “employee No. 1,” as he called it, at what eventually became the millennial-courting, and Emmy-winning, network Pivot. (Mr. Shapiro keeps his two Emmys—as well as the plaque for the Dinner for Five nomination—in his Seeso office.)

“Niche is the new mass,” NBCU’s tall-haired boy is fond of saying, and when giving presentations on Seeso, Mr. Shapiro rushes to point out certain features that seem incongruous next to similar competitors. For instance: the moment you log in, something will already be playing on your screen. You can browse options, just like you would on Netflix, say, but instead of relying on algorithms, Seeso has hired actual people to recommend shows. Along with two “certified comedy nerds,” Mr. Shapiro himself has been spending time curating for Seeso subscribers.

Explaining Seeso, Mr. Shapiro turns to Barry Schwartz’s academic theory, the so-called “paradox of choice.” “There this thing right now with TV, where everything is available online right now to stream and yet it seems like nothing is available online to stream on a Saturday night. That’s the result of the Costco-ing of content. We’re trying to be a cafe, not a Costco.”

But perhaps the most strikingly new world dictum of Mr. Shapiro is his belief that content is no longer determined by thesacrosanct standby: the holy dogma of demographics. “I think we’ve passed a point where demographics matter as much aspsychographics,” Mr. Shapiro told me; in his Philly-meets-South-Jersey drawl. While Mr. Shapiro admits that’s still how advertising works—cornering the market on 18-34, 18-49, women 18-54—his view is that content’s success is less dependent on age than it is on variables such as personality, attitudes and lifestyle.

“Over Thanksgiving, me and my wife watched all of Jessica Jones with our 20-year-old daughter. So what’s that demographic look like? It’s a psychographic: A psychographic of, I guess, ‘kick-ass shit.’ ”

Mr. Shapiro is a perfect fit for Seeso: every time I mention a comedy show—no matter how British or obscure—Mr. Shapiro tells me that he’s already licensed the rights to it, or is in the process of producing a new, exclusive show for Seeso from the creators. Garth Marenghi’s Darkplace? Check. The Mighty Boosh? Check. Peep Show?

A-ha. No, Mr. Shapiro admits, Seeso hadn’t acquired the rights to that Channel 4 series (which can currently be found on Netflix). But: “There’s a show Flowers we’re producing in the U.K. with Olivia Colman from Peep Show and Broadchurch and Julian Barratt from Mighty Boosh and Nathan Barley,” Mr. Shapiro exclaimed, practically bouncing in his chair. “It’s so good. It’s so good. It’s like Running with Scissors, the sitcom.”

Dan Harmon, the creator of NBC’s cult-comedy Community, told me that he walked into his meeting with Mr. Shapiro wary of anything that seemed too millennial. “My big headline was: I don’t like them, they remind me of my parents,” Mr. Harmon told me via phone. “They love their president, they love their mother, they love ‘deep art’ and you know…so did Hitler.”

There was little incentive for Mr. Harmon to pair up again with NBCU for his new semi-animated show HarmonQuest after his tenure on Community, where he was kicked off his own show, only to be brought back for a season…in time to see it canceled. (The final season aired exclusively on Yahoo!Screen.) But Mr. Shapiro convinced him to have faith: not just in the network, but in his audience.

“Evan said, ‘I have a millennial, I’ve been tracking them my whole career. And I sympathize with them,’ ” Mr. Harmon remembers. “It was the first time I heard any expression of empathy for these obnoxious little brown shirts.” Five minutes later, Mr. Harmon found himself agreeing with Mr. Shapiro’s view on the hipster generation.

“I get it now,” Mr. Harmon conceded. “I no longer see [millennials] as Hitler Youths.”

In the week prior to our interview, Seeso had shot a live special in San Diego that streamed directly onto the beta platform, Cameron Esposito’s live show in Chicago, and Wyatt Cenac’s stand-up series in Brooklyn. Other programming includes The Upright Citizens Brigade Show, an animated series based on the web comic Cyanide & Happiness, and HarmonQuest.Before the Morning After features drunk comedians being interviewed at 2 a.m.; Sammy J & Randy in Ricketts Lane is an Australian musical comedy starring a Ryan Gosling look-alike as a failed attorney who lives with a purple puppet. Above Average, owned by Lorne Michaels’ Broadway Video production company, will also have shows featured on the site, along with original stand-up.

Now in Beta, Seeso’s registered users are running three times over initial projections. But Mr. Shapiro is cautious, noting that none of the beta subscribers are paying for the service. And plenty of other comedy can be found for free online and on TV.

“It’s a new world,” said Mr. Harmon. “You start out writing for TV and the next thing you know, you’re writing for the Internet. And on the web, you can’t tell the next Snickers from the next thing we don’t remember because it tried to be Snickers.”

But if anyone can do it, Mr. Harmon said, it’s Mr. Shapiro. “He seems like a Hercules, or some other mythical Greek character; some hybrid of old world gods and new.” 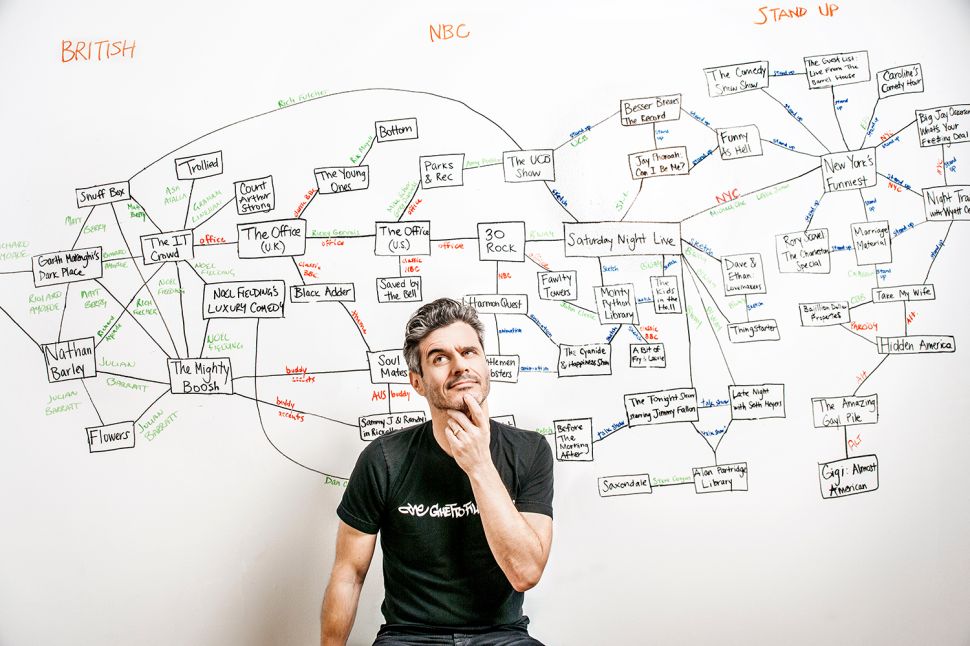