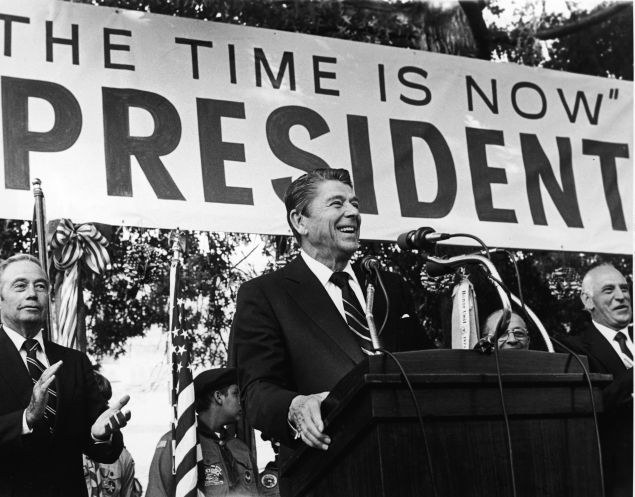 American politician Ronald Reagan smiles as he speaks on his presidential campaign in front of a large banner, 1979. (Photo: Hulton Archive/Getty Images)

Don’t bother fiddling with the tinfoil on the rabbit ears, either.

You haven’t been transported back in time 30 years—though if you have been observing the political media lately, you could be forgiven for taking a look around for Dr. Emmitt Brown’s DeLorean time machine.

As the punditocracy struggles with how to quantify the phenomenon that is the Donald Trump presidential boom, the self-proclaimed experts in Beltwayland are beginning to do what they always do when an unfamiliar present creates an unpredictable future: they’re groping for analogies from the past.

That’s why numerous television and print journalists have lately been reaching for a term that takes us back to the days when MTV actually showed music videos:

Yeah, there’s a golden oldie for you, folks. Doesn’t that take you back?

For those of you too young to remember the era or the term very well—which probably means most of you, because the Census Bureau tells us that only about a third of us are 45 or older—here’s a little refresher. A “Reagan Democrat” was a culturally conservative, white, working-class voter who belonged to the Democratic Party but crossed party lines to support Republican Ronald Reagan in his 1980 and 1984 bids for the presidency. Dismayed by the slide of the American manufacturing sector and put off by the sweeping social changes that had begun in the 1960s, many of these traditional blue-collar Democrats voted for Reagan.

To say that there still are Reagan Democrats today is absurd. It would be roughly equivalent to someone talking about ‘FDR Republicans’ in 1971.

Reuters, The New York Times, The Wall Street Journal and The American Spectator have all published articles since Halloween that posited Mr. Trump is attracting much of the same demographic that once helped boost Mr. Reagan—though in fairness, the Times did not actually use the term “Reagan Democrats.” Chuck Todd of NBC’s Meet the Press said Trump supporters were like Reagan Democrats, but Chris Matthews over at MSNBC’s Hardball went one further, saying there are currently “Reagan Democrats” in Mr. Matthews’ native Pennsylvania waiting to vote for Mr. Trump.

To compare Mr. Trump’s supporters to the Reagan Democrats of old is a fair comparison. To say that there still are Reagan Democrats today is absurd. It would be roughly equivalent to someone talking about “FDR Republicans” in 1971.

Generally speaking, Democrats who changed lanes to vote for Mr. Reagan in the 1980s either went back to their traditional party to support Bill Clinton in the 1990s, or left the Democratic Party behind and became Republicans. As the parties have realigned over the last generation, with Democrats almost entirely shedding their conservative wing and liberal Republicans becoming an extinct species, those culturally conservative Democrats—most notably in the Deep South, Appalachia and the Ohio River valley—either switched parties outright, or changed their voting behavior so radically that their unaltered status as registered Democrats became meaningless. Exhibit A is West Virginia, a blue-collar-dominated Appalachian state that used to be so off the table for Republicans that it was one of only six states President Jimmy Carter carried in his landslide 1980 reelection loss.

From the Great Depression through the end of the 20th century, almost no other state was as loyal to the party of Andrew Jackson as the Mountain State. In 17 presidential elections running from Franklin D. Roosevelt’s first election in 1932 to Mr. Clinton’s reelection in 1996, West Virginia voted Republican precisely three times—Dwight D. Eisenhower’s 1956 reelection, in which he lost only seven states, and the 49-state landslide reelections of Richard M. Nixon in 1972 and Mr. Reagan in 1984. West Virginia only went Republican in years in which Republican incumbents won massive landslides and exceeded 57 percent of the national popular vote. Republicans also almost never won the governorship, either of West Virginia’s U.S. Senate seats, or any of its U.S. House seats. The Democratic hold on the state’s legislature was massive and unbreakable.

Fast forward to today and you will find West Virginia has voted Republican in the last four presidential elections, by increasing margins each time, and that all three of its U.S. House members are Republicans, as well as one of its two Senators and both chambers of its legislature. Only Democratic Senator Joe Manchin and Democratic Governor Earl Ray Tomblin, who succeeded Mr. Manchin when he left the governorship for Washington, hold down West Virginia offices today. As Mr. Tomblin is not seeking reelection this year, most observers expect the GOP to have an excellent chance to nab the governorship as well.

Another key example is Kentucky, where registered Democrats still outnumber registered Republicans, but where Republicans have now risen to electoral dominance, with the recent statewide elections lifting the GOP. Across the river from Kentucky, southern Indiana’s traditionally Democratic “Butternut” region is now solidly in the Republican camp.

These are just a few examples. In these three states, and many other states like them, this movement from blue to red began when many working-class voters, disaffected first by the cultural upheaval of the 1960s and then hit with the economic stagnation of the 1970s, jumped on the Reagan bandwagon. Clearly, many of those voters and their descendants have never gone back.

They’re not Reagan Democrats anymore. They’re Republicans now, even if some number of them are not yet explicitly taking the label. Some of them may still habitually refer to themselves as Democrats—or they may simply have not gone to the trouble of changing their registration—but when they go into the voting booth, they’re pulling the lever for Team Red.

There’s no such thing as a ‘Reagan Democrat’—there are only ex-Democrats.

Clearly, the writers of American Government and Politics Today, 2013-2014 Edition, agree with this assessment. To excerpt their discussion of Reagan Democrats from page 251:

“Often self-identifying as working class, these Reagan Democrats were attracted to President Reagan’s policies. Motivated by a belief in traditional family values, anti-communism, and a strong national defense, by the 1990s, they had largely switched their allegiance to the Republican Party.”

There’s no such thing as a “Reagan Democrat” anymore. There are only ex-Democrats, and in many cases their adult offspring, who now vote Republican. If you’re talking about Reagan Democrats in this day and age as if they still exist, it’s time to put some plutonium in the flux capacitor and get yourself out of the past and back to the future. 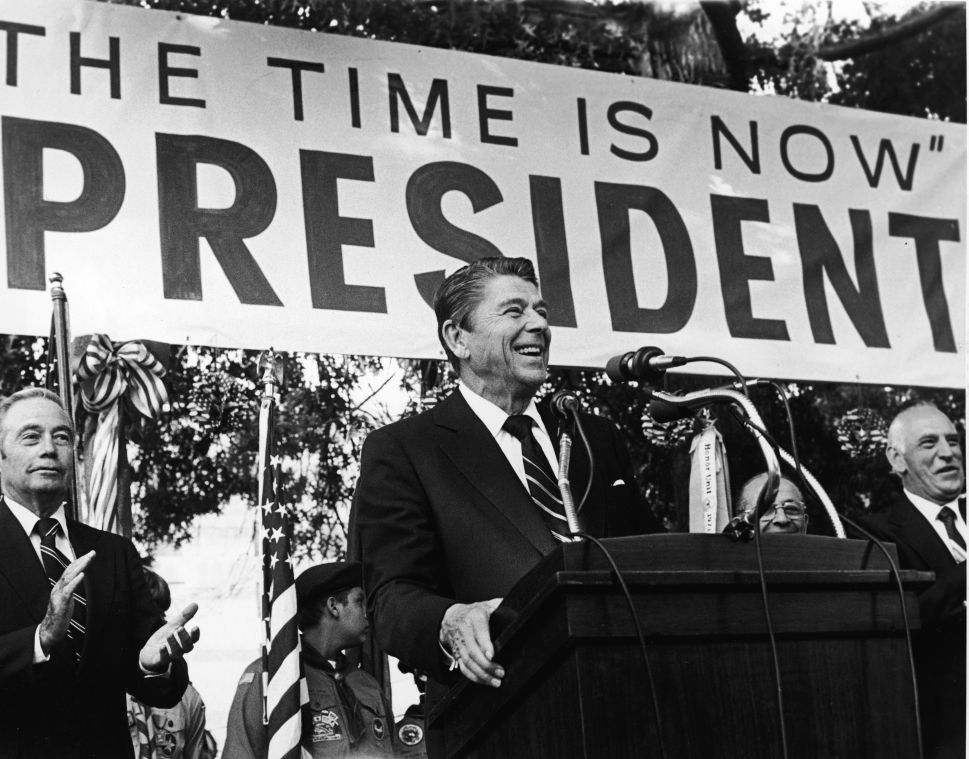