State and city workers: On Monday, Gov. Andrew Cuomo announced that he’d make the minimum wage for State University of New York employees $15 an hour—something he’s already promised to do for the state’s public employees, and has been daring New York City to do. Just two days later, Mayor Bill de Blasio—who lobbied Mr. Cuomo on a locally higher minimum wage with no luck last year—vowed to do the same for city employees. Many have wondered whether the feud between the two Democrats was hurting New Yorkers, but it’s worth wondering if that’s not quite the case when it comes to public workers’ paychecks: are the two men now trying to one-up and out-progressive each other?

Commuters, maybe: Let’s just be honest: nobody likes Pennsylvania Station. It is the LaGuardia Airport of our city’s train depots, and as such, and it is getting the same treatment from Gov. Andrew Cuomo—an extreme makeover, complete with a new name, the Empire State Complex (which more than one astute political observer pointed out sounds likes a mental problem that afflicts governors).  But wait, there’s more: the governor has also promised countdown clocks at subway stations and wireless internet on buses. This all sounds lovely—who among us hasn’t bemoaned the lack of natural light or decent food while waiting for an Amtrak at Penn, or longed to know how many more minutes we must stand around waiting for an R train?—but some transit advocates have noted it’s a little superficial. The crumbling tubes coming into and out of Penn are a bit more important than the crappy food and shopping. We might care less when that R train was coming if R trains came more often. It’s unclear how much the bones of the city’s aging infrastructure will really be shored up going forward.

Bill de Blasio: Sure, Mr. Cuomo just won’t lay off him when it comes to bashing his handling of the homelessness crisis, but compared to his recent run, this was a pretty decent week. The mayor came out of the holiday doldrums with a fair amount of forward momentum. He hired—at long last—Dr. Herminia Palacio a replacement for Lilliam Barrios-Paoli, his former deputy mayor for health and human services whose portfolio included homelessness and who left in August. Despite being in Mr. Cuomo’s shadow, he held a boisterous press conference with union allies on the hiking of the minimum wage for city workers. The mood was jubilant when he sat at a desk placed in the City Hall rotunda to sign an executive order providing longer parental leave to city employees—something the state doesn’t do for its workers. The homeless problem isn’t likely to be fixed soon, but the commissioner of the Human Resources Administration, Steven Banks, is displaying an air of competence, control, and humanity—running his own press conferences and talking to the public much more in just a few weeks than former Homeless Services Commissioner Gilbert Taylor had.

Maine Gov. Paul LePage: Like many rural and suburban parts of the country, Maine is currently in the throes of a heroin epidemic that is wreaking havoc on a population not historically associated with the drug—middle and working class white people. (And it’s hard to find somebody who isn’t white in Maine, since they make up 95 percent of the state’s population, not really a surprise when you consider it’s the birthplace of the LL Bean catalogue.) Recent comments about heroin traffickers from the state’s GOP governor, Mr. LePage, seemed to start out as racially coded and then just go in for good old fashioned racism:  “These are guys with the name D-Money, Smoothie, Shifty. These type of guys. They come from Connecticut and New York, they come up here, they sell their heroin, then they go back home,” he began before going all in: “Incidentally, half the time they impregnate a young, white girl before they leave, which is a real sad thing because then we have another issue we’ve got to deal with down the road.” This is not a great look for Mr. LePage, who was quickly called out on his comments—and then said it couldn’t have been racist, because he didn’t say whether D-Money was black or not, and he said “white girls” were getting pregnant because, well, everyone in Maine is white! Rarely is a state’s aggressive whiteness used as a defense against racism.

Melissa Mark-Viverito: The Council speaker and the Conflicts of Interest Board this week reached a settlement after a long investigation into Ms. Mark-Viverito’s use of services from the Advance Group, for which she was never billed, during the speaker’s race—which COIB said ran afoul of city rules prohibiting lawmakers from accepting gifts from lobbyists with business before the city. The speaker will pay $7,000—less than the $25,000 she might have faced. On the upside, she can now put the investigation—and its very pricey legal bills—behind her.

The National Rifle Association: Not only is the biggest pro-gun lobby displeased with President Barack Obama’s executive order on firearms—which in part look to clarify who qualifies as a gun dealer and must conduct background checks—they got called out by Mr. Obama on cable television this week for not showing up at his televised town hall on the topic. “There’s a reason that the NRA isn’t here,” he said. “They’re right down the street. You think they’d be prepared to have a debate with the President.”

Mr. Cuomo’s continuing insistence on trying to overshadow his taller colleague, Mr. de Blasio. At every turn, Mr. Cuomo is there, looming: assailing the mayor’s handling of homelessness, urging him to catch up already and raise the minimum wage for his city workers and then holding a dueling press conference when he finally does to announce he’ll fix the city’s blighted train station. Next week Mr. Cuomo will roll out his plans to fix the homelessness problem in his State of the State address—and Mr. de Blasio, who says he hasn’t been briefed, has promised to be in the audience.

Instead of holding a traditional State of the State address, Mr. Cuomo invites Mr. de Blasio on stage for a boxing match.

The two will be photographed awkwardly smiling and embracing one another after Mr. Cuomo’s speech. 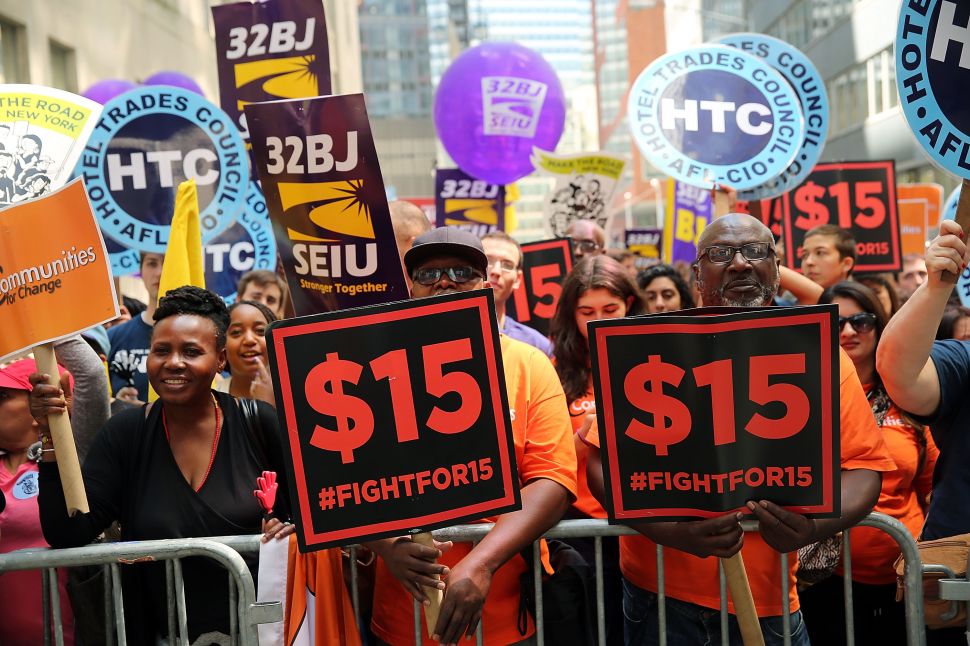