On Tuesday, Governor Chris Christie delivered his annual State of the State address. In his speech, he blasted New Jersey’s Democratic-controlled senate and assembly for the ongoing push in the legislature to put a constitutional amendment on the November 2016 ballot requiring quarterly payments from the state be made to the pension fund.

One large constituency that would be impacted by a failure to fund the pension system would be New Jersey’s teachers. PolitickerNJ spoke with New Jersey Education Association (NJEA) President Wendell Steinhauer and Vice President Marie Blistan to see what the large union though of Christie’s remarks. The two union leaders also weighed in on the pension issue that has been so hotly debated in the State House recently and how Senate President Steve Sweeney in handling his leadership role on the issue.

What is your reaction to yesterday’s State of the State address?

Steinhauer: It is the same old thing. No solutions. It is Christie 101. He doesn’t have solutions, he doesn’t have actions he can take so it is finger point and blame others to divert from his failures. He says nobody has done their job but he needs to hold up the mirror. Quite honestly the whole state of New Jersey feels the same way. The latest polling came out and 60 percent of people think we are on the wrong track. And it was a speech pandering to his national aspirations. It was a speech to people in New Hampshire. Getting the union bashing in and all that.

Blistan: I was actually very perplexed because he did not talk about his fiscal responsibility of funding the pension. What he talked mostly about was how not to fund it. So it was disappointing to say the least.

The Governor spent most of his time talking about pensions and drug addiction. Do you think that time was well spent?

Steinhauer: I don’t know if he is saving it for his budget address but the Transportation Trust Fund is going bankrupt and he didn’t mention that at all. If you focus on the pension, which he spent a lot of time on, he didn’t have any real answers for that. At the end of the day, you are going to have to pay for the pension. That is what is in the law. When 2027 comes along and the pension fund is not solvent at that time for my members, there is going to be a big bill that comes to fruition of about $8 billion. The time to start is not in 2027 when he will be long gone. Now is the time to work on it when it is about $4 billion so it does not rise anymore.

Blistan: What he should have spoken more about are the priorities that should be his but are not apparently his: the people in the state, the education of our children and the needs of people in the middle class who are struggling. His focus was not on any of that. He spent more time on how not to fund that pension and fulfill his fiscal responsibilities than what he should be doing to fulfill them. Especially when the constitutional amendment is nothing more than a pension payment that he had actually proposed in the budget.

Speaking of pensions, they have been a really hot topic lately with the constitutional amendment requiring the pension fund to be funded being considered. Do you think such an amendment is important?

Steinhauer: It is quite honestly the final step. We have worked for two decades now to have the legislature provide responsible funding. If they had done it right 20 years ago, they would be putting in half a billion dollars, not four billion dollars. We have gone through the legislature, we have exhausted all legal ramifications and quite honestly the constitutional amendment is the last step before we reach the step where the state has a very large bill in 2027. It is not something they can ignore. Making quarterly payments, that alone, will be enough to save $13 million. The governor will be out of here in January 2018. He is just trying to kick the can far enough down the road for him to get out.

Blistan: All parties have admitted that there is an obligation on the state’s part to fulfill the pension promise. Again, all the employees have faithfully made their payments every single month twice a month into that pension fund. The fact that there is a loophole in the constitution that allows governors like Governor Christie to ignore fiscal responsibility only hurts not only the people who have put into it and expect their pension, but it hurts citizens of the state. The constitutional amendment will hopefully fill the gap in the loophole so that this type of egregious behavior cannot and will not happen again.

Senate President Steve Sweeney has sponsored the bill that would put the amendment up for vote in 2016. What does the NJEA think of the Senate President’s leadership on the bill?

Steinhauer: There was a lot of fallout in 2011 from chapter 78 being pushed through. I think Senator Sweeney has championed the pension system, which he will tell you was his number one goal. That was the compromise back then with the governor. I think he has kept his word as has the Assembly Speaker [Vincent Prieto]. In the last two legislative budgets they have funded pensions and the governor has vetoed it. There has only been one problem to getting this done and that is the governor.

Blistan: I commend him for his leadership on championing the cause with this constitutional amendment and also championing the cause along with Speaker Prieto of putting forward fiscally responsible budgets that include the pension payment during the past two years. We talk about people who are in political power and then we talk about leaders. Steve Sweeney and Vincent Prieto are definitely demonstrating their leadership capabilities.

Steinhauer: Our members are passionate about this issue. They are taking the time out of their day to let the legislatures know they have our support on this bill. There are people who don’t want this to be passed and we wanted to make sure that the legislators that are there to do the right thing know that we are behind them.

Blistan: They have continued to make their payments faithfully their entire career. They have made the sacrifices that were mandated and imposed on us with chapter 78 in 2011 with the promise that the state would finally fulfill its promise to make its regularly scheduled payments as well. Their attendance at that statehouse was to a) make sure that was happening and b) thank the legislatures who were standing up and being fiscally, ethically and morally responsible.

What are the next steps to getting the pension funded?

Steinhauer: It has to be passed in the legislature and it passed by majority in both houses. If the governor signed it, it would go right on the ballot. Judging from his speech yesterday, it doesn’t look like he is going to be willing to do that. So to get on the ballot it needs to be passed in two legislative sessions. It just got passed in the last on so as long as they go through the same thing again and pass the resolution in the senate and the assembly before August, I believe, then it will be on the November ballot. They passed it once and they need to go through that exercise again. I look forward to it being on the ballot in November.

Blistan: I think that it absolutely should pass, I think that it will pass because it is the right thing to do. New Jersey residents know that this is an obligation that will have to be met no matter what and all parties have indicated that. It is a matter of having it so that they taxpayers in this state are not going to have to pay a price that is so exorbitant that this Governor has put us on a path to pay.

The Senate President is a likely 2017 gubernatorial candidate. Do you think his support of the pension issue will help groups like the NJEA rally behind him?

Steinhauer: I don’t know if it is for political gain. What I do see is that he is standing by his word to make good on the pension process. He has been consistent on the pension issue throughout. Whether it helps him politically for government, that is another issue that we will have to see.

Blistan: People are looking for leadership in the state no matter what we are doing. We come out and we support pro-public education policy makers. 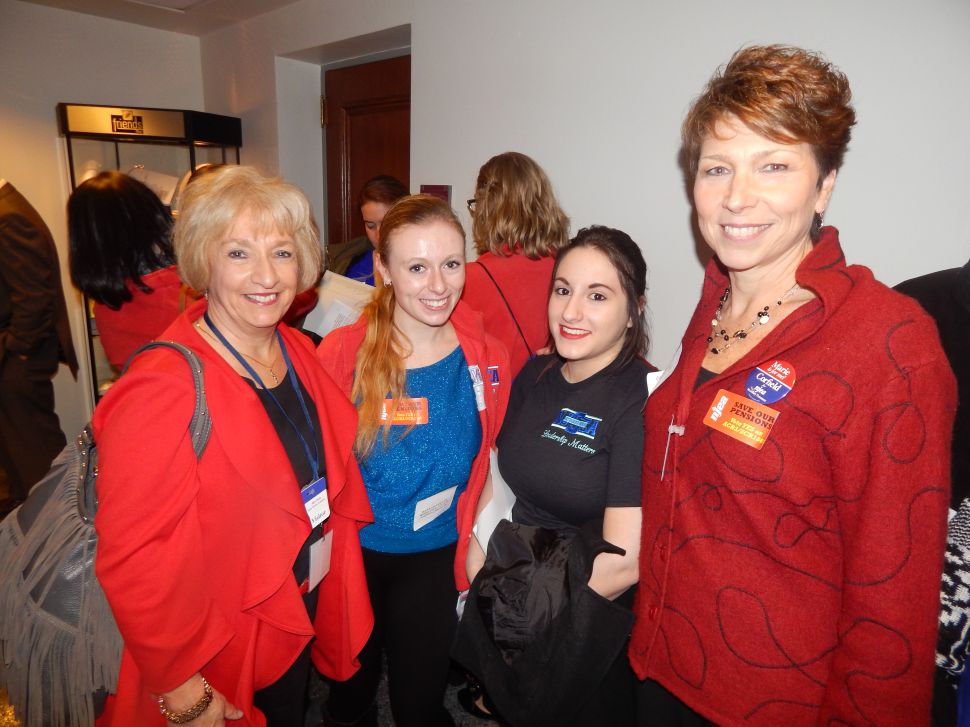