The state’s three largest cities are Newark, Paterson and Jersey City. In the wake of this weekend’s record-shattering winter storm Jonas, the three population centers had to deal with the daunting task of digging out. Some did better than others.

Here is a roundup of how the cities’ officials handled the snow and what people are saying about the response efforts in the wake of the blizzard.

At the helm of the fight in Jersey City was Mayor Steven Fulop. Ahead of the storm, Fulop released a detailed snow removal plan that will span the middle of the week. By the end of the day today, Fulop plans to have cleared 600 of the city’s streets.

Earlier today, Fulop posted this message on his official Facebook page: “While I know we will never make 100% of the people happy all the time (although we do try), I hope you recognize the DPW workers have been on straight shifts since Friday working around the clock in a historic massive storm. Some of the streets posted about not getting plowed, I know were done because I did them personally at 330am last night with a crew. We are out there working and we do appreciate many of the great neighbors who have helped.”

Other than from a handful of residents still struggling with digging out, Fulop’s snow removal plan and implementation has received little criticism. As his 2017 gubernatorial run becomes more and more likely, Fulop’s management of the blizzard could bode well for his future State House aspirations. Fulops regular updates, willingness to receive feedback from residents and overall blizzard response might be something he can use during his gubernatorial campaign. Fulop can say that he knows how to manage a crisis, something critical for a governor.

Paterson Mayor Jose “Joey” Torres has said that the city is “working around the clock to clean up the storm” but, even so, the majority of the city’s narrow side streets are still clogged with snow. According to the office of the mayor, “40 trucks have continuously been cleaning the streets and approximately 6,000 tons of snow have been removed from Paterson streets.”

Despite Torres’ efforts, not everyone is happy with the progress in Paterson. Sixth Ward Councilman Andre Sayegh said that he feels the efforts have fallen short in the city due to a failure to connect with the snow removal effort in Passaic County.

“I believe he has to do a better job of coordinating with the County,” Sayegh said. “A city our size needs to have more of a shared services agreement with the county. I have been on the streets all weekend, on the phone, and I have observed that the county roads look a lot better than a lot of the side streets.”

According to Sayegh, much of what is making many of Paterson’s side streets “impassable” is caused by residents eager to dig out.

“What I personally observed, and asked a resident not to do, is that people are shoveling the snow and putting it back in the street,” Sayegh said.

Significant criticism has been levied against Mayor Ras Baraka of Newark for his handling of the storm’s aftermath. Residents are complaining that, even though storm cleanup has been ongoing since early Sunday, roads are still completely unfit for travel. Some are saying that, even where there has been plowing, the streets are still dangerous.

For some, the state of Newark’s roads have drawn comparisons between Baraka and former Newark Mayor (and now U.S. Senator) Cory Booker’s efforts to clear snow during his tenure in the city. According to East Ward Democratic leader Joe Parlavecchio, however, those comparisons are both unfair and unfounded.

“Booker never had a storm of this magnitude,” said Parlavecchio. “We have to cut the mayor a little slack, this was an unprecedented storm. With any new administration, it takes time to take their procedures and policies down pat. Believe me, they are out there.”

According to Parlavecchio, this storm has been a learning experience for the Baraka administration and he “has a lot of faith” in the administration to react accordingly to future winter storms.

Earlier today, Mayor Baraka posted this message on his Facebook in response to the blowback from residents: “Newark, I assure you I hear you loud and clear and I understand your frustration. We are working diligently to rectify this situation as fast as possible. With the recent assistance from the county, state, independent contractors and other agencies we just put another 25 plows out on the streets. I ask for your patience as we continue to work on cleaning every inch of our city. We will not rest until it is done.” 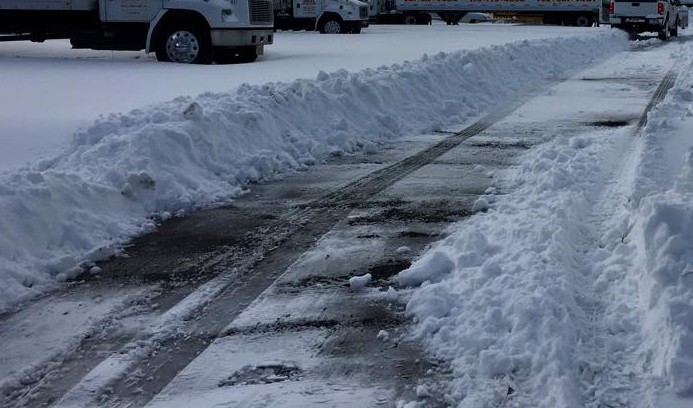