Despite the fact that fashion seems to be infatuated with what’s new and cutting edge, the retail sector of the industry has remained stagnant over the past 50 years. Sure, there are a few pack leaders like Rebecca Minkoff, who re-designed her flagship in Manhattan into a tech-savvy shop and Burberry, which equips sales associates with iPads, but for the most part, it’s the same old across the board.

But with new technology from Intel, that’s all set to change.

“Retail is going to change more in the next five years than it has in the past 50,” said Rachel Mushahwar, the global director of Intel’s retail enabling team, at a press breakfast on Tuesday morning. At the preview, the company unveiled tech tie-ins with fashion names like Brooks Brothers, Nordstrom and Levi’s, mostly revolving around their RealSense technology.

For Nordstrom, the computing innovator focused on the retailer’s shoe department. According to Ms. Mushahwar, the instrument used to measure shoe size today, the metal Brannock device, has been used for the last 100 years. Its one dimensional measuring system doesn’t provide enough information and its dependence on human accuracy makes it unreliable. To bring the necessary instrument into the modern era, Nordstrom has been testing a 3-D foot measuring platform from Volumental which uses Intel’s RealSense camera to provide more accurate data.

Customers step on a small platform and in seconds the device tabulates shoe size, arch height and and ball width. But be prepared for it to read separate numerical sizes for each foot, as many people don’t have the same size feet. In its beginning phases, the information allows for selecting the best fitting shoe off the rack but in the future, the technology could lend itself to 3-D printing like what Adidas announced last year and could recommend specific brands that will best fit your foot’s dimensions. Nordstrom is already using the system in Seattle and says they are seeing great results.

Brooks Brothers, too, is hoping to integrate RealSense. Having unveiled their latest men’s collection last week at Milan Fashion Week, they are busy pulling the curtain off of their “Made to Measure” program in the States. The technology uses body scanning technology via either HP tablet or tech-equipped changing rooms to do rapid 3-D scans for fittings. After being provided with height, weight, gender and two quick photos, the system will almost instantly display full body measurements in addition to product recommendations.

For both Nordtrom and Brooks Brothers, the hope is that these measurements will be kept on file so repeat customers can access them for quick ordering in the future. If Brooks Brothers customers buy RealSense enabled tablets, they could even take their own measurements for e-commerce purchases.

Intel’s presence is targeted more so at service than measurements when it comes to Levi’s. The brand unveiled their impending plan to use the Intel Retail Sensor Platform, which tracks items in the store. The results for the customer boil down to one thing: efficiency. When customers take items from shelves, the sensors can track where it’s been moved to. Once the item has been brought into the dressing room, display screens instantly pull up images of the items. Swapping them out for another size is as simple as selecting it on the screen. Product recommendations similar to this experience can already be tested out on sites like Amazon and Net-A-Porter.

Product requests put into the system at Levi’s are sent to sales associates who are notified exactly where the item is in your size and whether it’s been mistakenly put in another section, is behind the counter waiting to be reshelved, or in the stockroom. In future iterations, Intel hopes to also integrate the ability to check out from the fitting room.

Of course these efforts aren’t the first that Intel has made to integrate into the fashion realm. The company partnered with Opening Ceremony on the MICA smart bracelet back in 2014 and has done other ad hoc projects, including a smart watch for Tag Heuer. These latest efforts see the company marrying the convenience of online shopping with the tangibility of the in-store experience, meaning the future of retail is just around the corner. 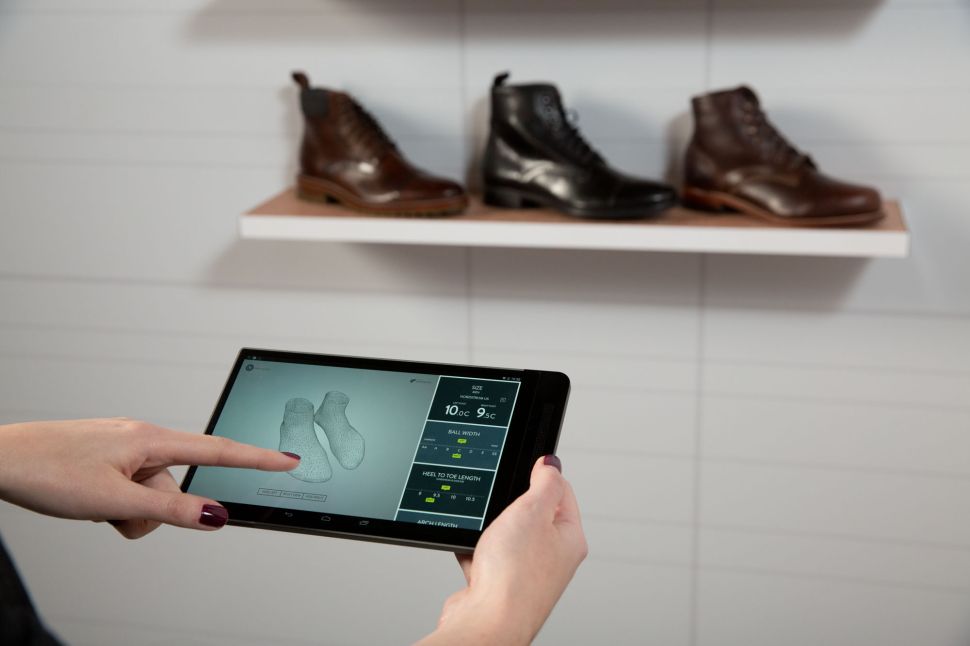