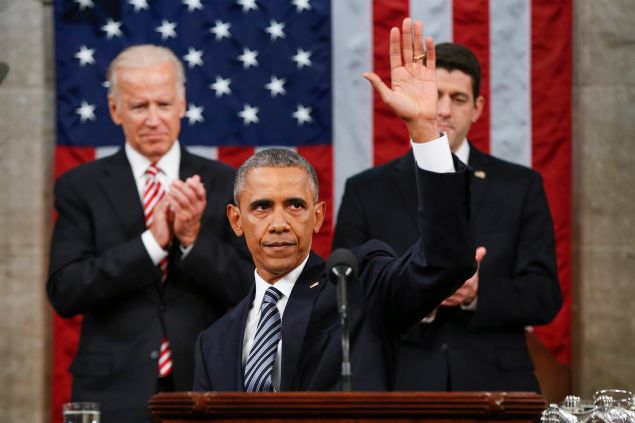 President Barack Obama waves at the conclusion of his State of the Union address to a joint session of Congress on Capitol Hill January 12, 2016 in Washington, D.C. (Photo: Evan Vucci – Pool/Getty Images)

Yesterday, only hours before President Barack Obama was to deliver his final State of the Union address to the nation, over in the Persian Gulf, Iran seized two small boats belonging to the U.S. Navy. Ten of our sailors spent the night in Iranian custody. They have been released already, as Tehran promised, but the sting of international humiliation will take longer to dissipate.

The timing of Iran’s seizure is difficult to miss. Not only did this cast a distinct pall over Mr. Obama’s address—particularly since the president, who never tires of touting his nuclear deal with the revolutionary regime in Iran, failed to mention the ten American sailors in Iranian hands last night—but it happened only days before onerous international sanctions are set to be lifted off the mullahs in Tehran.

That, of course, is the prize Iran needs to rebuild its damaged economy, which has suffered badly at the hands of UN sanctions placed on the country for its longstanding rogue conduct, particularly regarding its nuclear program. While the Obama administration has insisted that Tehran is keeping its side of the nuclear deal, there are many doubters, especially in Western intelligence circles.

‘Obama thinks there’s a deal with Tehran,’ explained a senior U.S. intelligence official to me recently, ‘but it’s more accurate to say we have a deal to someday maybe have an actual deal.’

Skeptics have been bolstered by repeated Iranian actions since the deal was signed in Geneva last summer following years of negotiations, egged on by repeated secret pleadings by Mr. Obama to the mullahs. However, recent ballistic missile tests by the regime are believed by many inside the Beltway to be a violation of our agreement, while some in the know assess that there really is no deal at all.

“Obama thinks there’s a deal with Tehran,” explained a senior U.S. intelligence official to me recently, “but it’s more accurate to say we have a deal to someday maybe have an actual deal.” Few American intelligence officers who are acquainted with Iranian deception programs regarding their nuclear program are optimistic about the deal having the stated effect of seriously deterring Iran’s atomic ambitions for very long.

Moreover, if Mr. Obama expected lifting sanctions on Tehran would encourage more conciliatory behavior from the mullahs, he was sadly mistaken. Iranian relations with Saudi Arabia have taken a dramatic turn for the worse in recent weeks. The Islamic cold war that has dragged on between Riyadh, Saudi Arabia and Tehran since 1979, when the revolutionary regime took power, is melting down and may get hot, based on current indications. The breaking of diplomatic relations between them is an unmistakably bad sign. A major regional war is a distinct possibility, given rising tensions on many fronts: Iraq, Syria, Yemen and across the Gulf, where Saudis, Iranians and their various proxies wage war increasingly openly.

Just how bad things have gotten in the Gulf is made plain by Pakistan’s recent statement that it would back the Saudis militarily if things get out of hand with Iran, their mutual foe. Pakistan and Saudi Arabia, both majority-Sunni, have their disagreements but are united in their fear of Iranian—that is, Shia—dominance in the Gulf region. Particularly worrying is the view of many in the spy business that Pakistan would quickly send a nuclear weapon to Riyadh if needed to deter Tehran.

It’s a poorly guarded secret that Pakistan’s nuclear weapons program, which came to fruition in 1998 with a successful nuclear bomb test, was partly funded by the Saudis, who wanted a Sunni bomb. In exchange, Islamabad will come to Riyadh’s aid, even nuclear aid, in an hour of crisis. “If Tehran announces on a Monday that it has a nuke, the Saudis will ‘suddenly’ have one by Wednesday,” explained a Pentagon nuclear expert.

Just as worrisome is the reality of nuclear ties between Tehran and Pyongyang, North Korea, which just conducted another major atomic weapons test to showcase its power. Iranian scientists have observed previous North Korean nuclear tests and a big question now facing the U.S. intelligence community is: Did any Iranians participate in the test last week? It’s an alarming fact that Iran can get a nuclear weapon at any time from a single IL-76 cargo flight from North Korea—which may, or may not, be detected by Western intelligence.

Into this unraveling mess stumbled two U.S. Navy small craft yesterday. Such missions take place nearly every day, where Iranian and Western—often American—warships play cat and mouse games in the waterways of what Tehran ceaselessly reminds the world is the Persian Gulf. According to press reports, the boats experienced mechanical trouble and wound up on Farsi Island, in the middle of the Gulf. That island just happens to have a base operated by the naval force of Iran’s Revolutionary Guard Corps, the notorious Pasdaran.

The Pasdaran are infamous for their support for terrorism across the Middle East and beyond and have played a large role in Iraq and Syria of late, but they also possess naval forces that compensate for their lack of major vessels with impressive acumen with small boats that are fast and well-armed. They employ them aggressively, and Pasdaran craft regularly confront Western naval vessels they believe are getting close to their turf.

How exactly our boats wound up in Iranian hands remains something of a mystery so far.

How exactly our boats wound up in Iranian hands remains something of a mystery so far. Reports of navigational errors need investigation and the possibility of Iran spoofing our GPS cannot be ruled out. Regrettably, the notion that both boats suffered mechanical breakdowns is only too plausible.

They are called Riverine Command Boats by the Navy, which has used them for operations in shallow waters for nearly a decade. They are actually Swedish in origin and, while they are very fast, able to achieve 40 knots, and are well-armed for their size, they function poorly in the Persian Gulf. Designed for the chilly Baltic Sea, the RCB frequently overheats in the hot climate and its high-performance engines shut down with alarming frequency. Not for nothing do pairs of RCBs go out on missions in the Persian Gulf with tow lines—to bring the other boat back home if, perhaps when, it breaks down.

It’s therefore a good question why the Fifth Fleet, our Navy outfit in the Gulf, headquartered in Bahrain, sent such unreliable vessels into dangerous waters yesterday. This needs to be answered, particularly in light of previous cases of Pasdaran ambushes against Western naval vessels, namely an incident with the British frigate Cornwall in 2007 plus an incident with the Australian frigate Adelaide in 2004. Vigilance ought to have been in order yesterday but apparently was not.

The good news is that our ten sailors have been returned unharmed—Tehran naturally insisted the sole female sailor in the group be covered in hijab for the cameras, for political effect—and we’ve gotten our RCBs back too. However, it should be expected that not everything has been returned by Iran, such as the sophisticated electronics gear such boats carry. That will be of high interest to the Pasdaran and their friends abroad.

The White House has been at pains to play down the incident, which is singularly off-message with how Mr. Obama paints his relations with his partners in Tehran. Secretary of State John Kerry actually thanked the Iranians for their “help” in returning the sailors without further incident, which does nothing to diminish fears that Mr. Obama will tolerate Iranian misdeeds of any kind, so desperate is he to preserve his showpiece nuclear deal with the mullahs.

Regrettably, the regime’s military and security policy is dictated not by the relatively polite diplomats of the Iranian foreign ministry, rather by the revolutionary hotheads of the Pasdaran, many of whom actively seek confrontation with “the Great Satan.” Hence deals cut with Tehran will apply only as far as the Revolutionary Guard deems them to be in Iran’s interest. In the case of nuclear matters, that isn’t very far at all.

For years, Obama has insisted that Tehran can be a good-faith partner in diplomacy. Indeed, the president has staked his whole foreign policy legacy on this assumption. His grand bargain with the revolutionary regime, which will begin its reintegration into decent global society, is so important to Mr. Obama that he has wrecked our relations with close allies like Saudi Arabia and Israel to achieve it.

The president is so eager to accommodate Iran that he more or less overlooked Tehran’s efforts to blow up the Saudi ambassador to the United States in public in downtown Washington, D.C., back in 2011, an outrageous act of war that ought to have forced this White House to rethink its Middle East strategy, yet did not. Compared to that incident, the brief arrest of ten American sailors seems like a minor annoyance that can be overlooked for the greater good. As Mr. Obama begins his last year in office, we can only hope the Pasdaran feels the same.