The Outsider Art Fair is not most art fairs. Unlike in the Contemporary art world, it’s discerning eyes, not padded pocket books, that spur sales here.

This year’s fair, the 24th edition, features work by a homeless man, a developmentally disabled man and a New Jersey police detective, to name a few.

More than ever, as the fair opened its doors on Thursday, it was evident that in the world of Outsider art which, perhaps to its benefit, is loosely defined even by those in the business, there’s no shortage of new discoveries.

Nor is there a limit to the market’s potential, evidenced by the sale of African American artist William Edmondson’s 1936 sculpture Boxer at this morning’s Outsider Art sale at Christies. The work set a new world record for Outsider art at auction, edging out the previous record (just over $745,000 for a work by Henry Darger), and fetching $785,000 after an intense bidding war.

One artist making his art world and art fair debut was Tizzie Mills at New Haven’s Fred Giampietro gallery. Mr. Mills is homeless and a New Haven local who visits the gallery daily, owner Fred Giampietro told the Observer. Mr. Mills paints comic superheroes and villains from Deadpool to Batman and the Joker with meticulous care, softly creating shadow and edging with feathered strokes and thickly building up texture on the surfaces of walls and buildings in the background. And nearly all of his paintings feature text that riffs on the sharp dialogue you might find in a comic strip.

The characters are the sole subjects of his art and he’s known in New Haven for working on his paintings no matter where you find him. Because the works are so new, they’re on the affordable end of the wide range of price points found at the fair. Each work is $650.

The Good Luck Gallery is Los Angeles’ only art space specializing in Outsider art and also happened to be debuting an artist the fair: Willard Hill. The octogenarian Manchester, Tennessee, native is a prolific sculptor who crafts delicate figurines and playful tableaus made from painted masking tape and other found household items, such as foil or pieces of his wife’s wig. Mr. Hill works so fast and makes so many, according to gallery owner Paige Wery, that they completely fill the tiny shack behind his home that he uses as a studio.

“He fishes and he makes art, that’s all he does,” Good Luck’s Winter Jenssen told the Observer.

Apart from selling some of his sculptures to a few residents in Manchester, Mr. Hill has never sold his work at an international venue before. Individual sculptures range in price from $800 to $1,600.

Also at Good Luck’s booth is another artist whose work drew attention from passersby. Art Moura’s sewn fabric sculptures are being shown both in the gallery’s current exhibition is L.A., and at the fair’s booth in New York. The sculptures, which are reminiscent of masks and carved figures found in African and Oceanic art, were described by Mr. Jenssen as both “creepy and sweet at the same time.”

At New York’s Y Gallery was the work of Charles Vincent Sabba, a longtime New Jersey police lieutenant whose experiences on the force have deeply influenced his art. On view are just a small portion of the nearly 80 fingerprint drawings Mr. Sabba has made for his series The Wall of Resistance. Gallery director Carlos Garcia Montero Protzel explained that each portrait is either an iconic criminal (some are known for their involvement in famous art heists), or the likeness of a stolen masterpiece, rendered using the same ink used to fingerprint criminals upon arrest and painted on fingerprint cards Mr. Sabba acquired through his day job.

In addition to the fingerprint paintings, Mr. Sabba makes pastel drawings featuring his alter ego and performance personality, Actaeon, who is based on a mythical Greek huntsman. The drawings depict in graphic detail—that leans heavily on art historical imagery—Actaeon’s various real life performances and sexual fantasies.

Tokyo dealer Yukiko Koide is showing work by Japanese artist Yasuuki Ueno, a mentally handicapped man whose drawings are inspired by the women who appear in fashion magazines. Mr. Ueno’s colored pencil compositions, which are $1,500-$1,800 a piece, are arranged similarly to that of the grid of a comic book page, with some panels larger than others, and some featuring decorative borders and patterns.

“He may identify as a woman, because he has never once drawn a man,” a representative from the gallery explained.

From first time exhibitor Anne De Villepoix, a contemporary French gallery that has shown at major fairs such as Fiac, is a presentation of the Swiss artist Annette Barcelo.

According to the gallery, the artist only works in series, and on view are two. The first, is a series of 12 black and white paintings on pieces of cardboard, each one a depiction of a different horned or animal-like beast. Figures are painted without eyes, and with stark white faces.

“Everytime there is a woman in a drawing, it’s almost certainly her,” said a representative from the gallery.

In the second series at the booth, the artist has painted similar figures, this time in color and on tracing paper.

It would be easy to think while looking at the architectural drawings Lynxborough’s houses that Du-Glass, who was born James Donald Beatty, at least had some formal art training or exposure to architecture history, but that’s not the case. Du-Glass, who formally changed his name later in life, was a reclusive self taught draftsman who based the drawings on some existing buildings in his hometown of Southbend, Indiana, but mostly from imagination. He even went so far as to include the names of church congregation members and other townsfolk on the back of his artworks.

The drawings are priced between $750 and the high $2,000 range for works that are double-sided.

The Outsider Art Fair is open through Sunday, January 24 at the Metropolitan Pavilion at 125 West 18th Street in Manhattan. 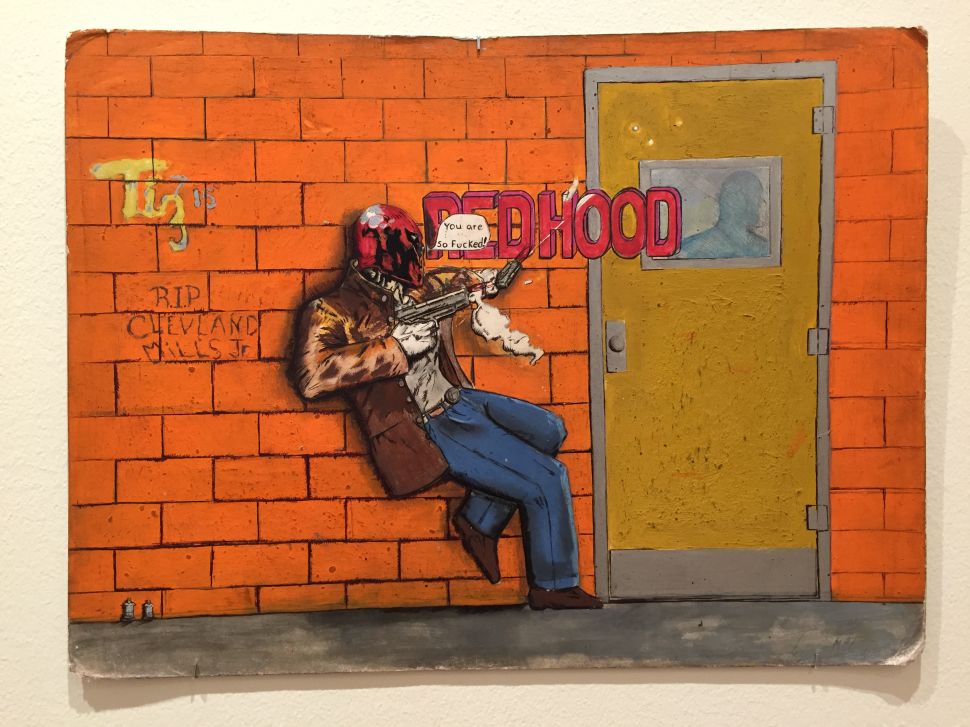