PATERSON – Congressman Bill Pascrell (D-9) welcomed a family of recently arrived refugees from Syria into his Paterson office on Tuesday. The intention of the discussion was to share the experience the family had with the resettlement process and how life has been since they settled in Paterson. The talk comes in the midst of a swell of anti-refugee sentiment that has been at the center of the national dialogue in recent months.

“This family has been through a long journey to escape the unrest in Syria,” Pascrell said. “They waited four years in Jordan to get here. They made that journey with five children.”

Syria is currently facing a civil war that has left 13.5 million people in need of humanitarian assistance, according to World Vision. That crisis has led to a surge of Syrians fleeing their country. One such family is the Al-Teibawis.

To represent the family, Morad and Ola Al-Teibawi met with Pascrell along with their three-year-old daughter, Rama. They were joined by the Jersey City Director of the Immigration and Refugee Program for Church Word Service (CWS) Mahmoud Mahmoud. CWS was responsible for helping the family find a place to live after they were accepted into the U.S. They have provided similar services to a number of fleeing families. Mahmoud served as a translator for the discussion between Pascrell and the Al-Teibawis.

Much of the discussion centered on the family’s decision to flee and the four years they waited in a Jordanian refugee camp before passing the required UN checks to qualify for resettlement in the U.S.

“I would like to show my appreciation for America for letting me in and opening its doors,” Morad Al-Teibawi said via Mahmoud. “I hope America will keep its doors open. We hope that the doors are never closed because people are facing extreme conflicts. Children are dying in boats. Now people are living well below the poverty line and fighting just for food.”

Pascrell said that, while he understands the fear associated with letting refugees enter in the wake of terror, said that America cannot succumb to fear and block the entrance of so many who are in need.

“There is always a place at the table for you at the United States of America,” Pascrell said. “Sometimes you have to fight your way for it.”

Former Paterson Police Commissioner Lawrence Spagnola—who was in his position during the 9/11 terror attacks—said that the brewing fear is actually a tactic being employed by the terrorists.

“They want a backlash, that is what the terrorists want,” said Spagnola who also denied the rumors of 9/11 celebrations in Paterson’s heavily Middle Eastern districts. “That way they can say this is what we told you. But we can’t let that happen. We can’t give in to those animals.”

Pascrell also speared Republican presidential frontrunner Donald Trump for employing fear tactics and promoting anti-Muslim rhetoric. He also mentioned that he “completely disagrees” with New Jersey Governor Chris Christie’s call for a ban on any and all refugees entering the state, even young children.

“I totally disagree with him,” said Pascrell of Christie who is currently pursuing a 2016 presidential bid. “I am certainly not playing to any group. I know who the governor is playing to, you have to be on Mars not to. I wish he was here, I truly do.”

Pascrell has been an advocate of refugee causes. In 2015, he introduced HR-2839, a bill that would help provide states and non-profits with assistance to help with refugee resettlement. In 2014, he sent a letter to President Barack Obama that called for more help with the Syrian refugee crisis.

Ola is currently over eight months pregnant with her sixth child, the first in Al-Teibawi family to be born an American.

“If the baby doesn’t go back, we won’t go back either,” Morad said.

Morad is currently pursuing work in the United States. He left the Syrian Army in 1996 and worked as a delivery driver and forklift operator until his family left Syria in 2012. The rest of the Al-Teibawi clan has been enrolled in school. 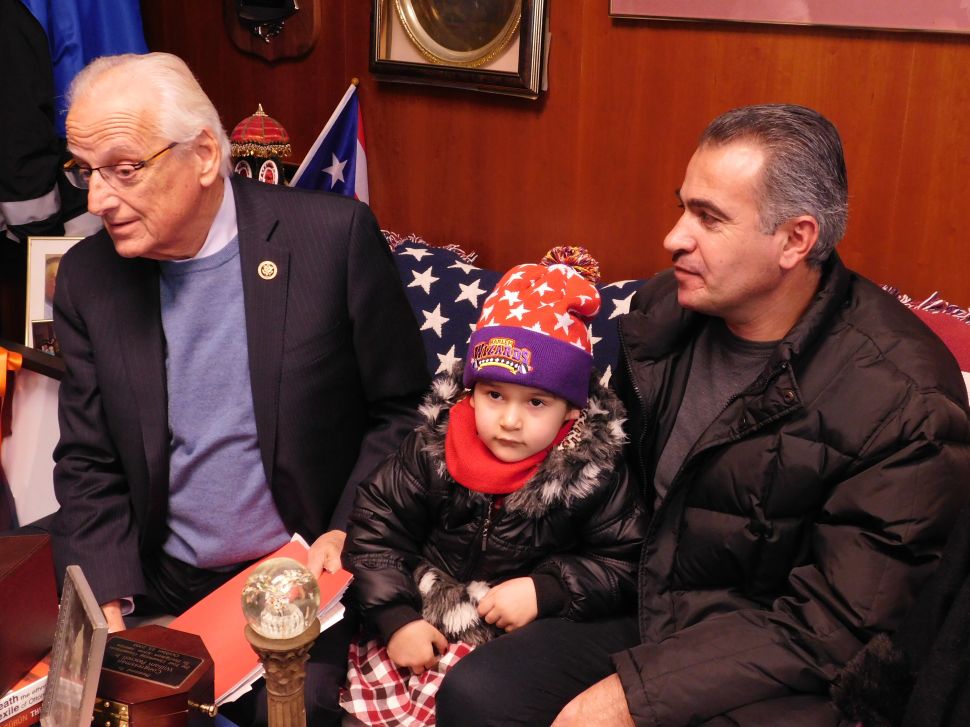