That was the message from NYCHA Chairwoman Shola Olatoye at a Council hearing held at the Isaac Houses-Holmes Towers complex on the Upper East Side, one of 80 sites across the city identified as a “strong neighborhood” for new mixed-use development. The revenues from such half affordable, half market-rate construction would go to make vital repairs at Isaac Houses-Holmes Towers and to patch the troubled public housing authority’s $300 million annual operating deficit and $17 billion backlog of badly needed infrastructure repairs.

After a panel of Isaac Houses-Holmes Towers tenant leaders told Bronx Councilman Ritchie Torres’s Committee on Public Housing that they did not want to lose the parcels slotted for a new building, local Councilman Benjamin Kallos asked Ms. Olatoye whether residents “can say ‘no'” to the project.

“This program is moving forward,” the de Blasio administration official answered, to gasps and boos from the packed room of residents. “Residents can say they have their opinions.”

The chairwoman insisted the only alternative to the creation of revenue-generating new facilities is the “grim fate” that has befallen public housing projects in Chicago and Saint Louis: continued deterioration, then demolition. She warned that “no cavalry is coming” from the state or federal government to bail NYCHA out of its decades-deep financial hole.

“Really tough problems are rarely solved by popular solutions. We must shift the mindset that there will be an easy, quick, painless fix,” she said. “Our present day reality is NYCHA is at the brink.”

The best residents could hope for, Ms. Olatoye said, was to accept the new development and participate in the authority’s engagement process. She promised that process would allow them to make recommendations about what specific problems at their buildings NYCHA would use the new funds to fix.

“It is moving forward hopefully with those residents who wish to have an input on the scope and scale and size of this program but we are moving forward because we believe inaction is unacceptable,” she said.

Mr. Kallos and his colleagues objected to the seemingly undemocratic nature of the proposal.

“It’s like an election with only one person on the ballot, which isn’t much of an election,” he said. “It’s not much of a process if we can’t say ‘no’ to it.”

Building on NYCHA lots was known as “infill” under the Bloomberg administration, but Mayor Bill de Blasio and Ms. Olatoye have rechristened it “Next Generation Neighborhoods.” The mayor has stressed that his plan differs from former Mayor Michael Bloomberg’s because his predecessor only intended to open the properties to luxury development.

By contrast, the Next Generation plan calls for reserving 13,500 of the 17,000 new apartments created for below-market rate tenants—with 25 percent set aside for current NYCHA residents.

Ms. Olatoye said tonight that, of the 80 “strong neighborhood” sites, the authority has analyzed the potential for new mixed-use construction at 40 of them. So far, however, it has only named Isaac Houses-Holmes Towers and the Wyckoff Gardens development in Downtown Brooklyn—where Mr. de Blasio met with enraged residents earlier this month—as locations where it plans to issue a request-for-proposal for a private developer to build. 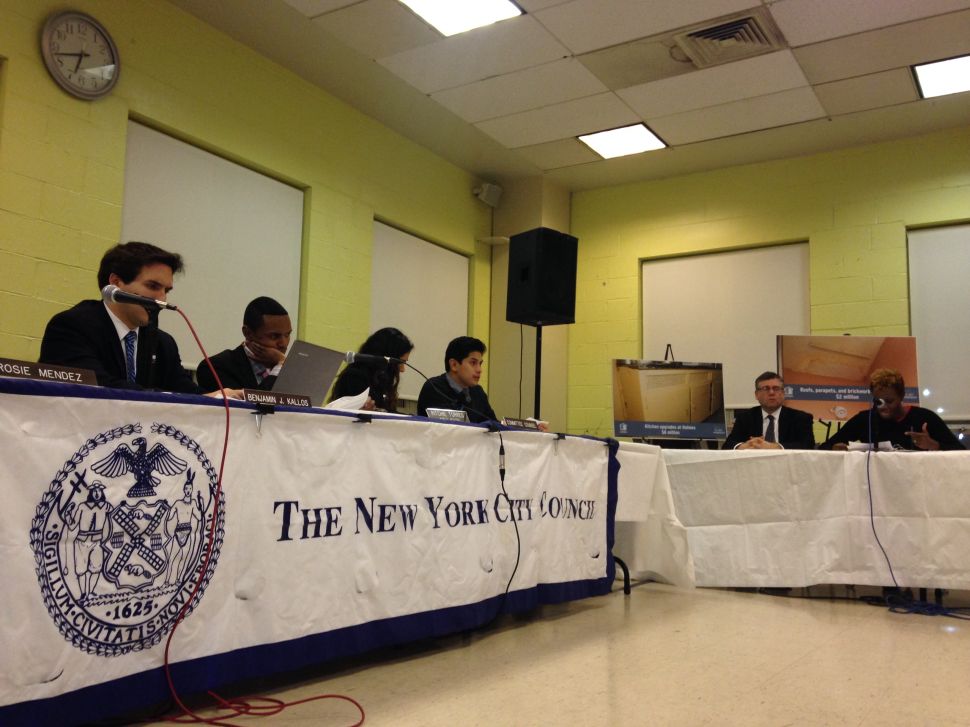