It’s the first day of February in New Jersey, where all eyes in the political world are on tonight’s Iowa caucuses and Chris Christie’s chances there. But the governor isn’t the only New Jersey politician who can benefit from tonight’s vote. We also kick off the work week by taking a look at the winners and losers in last week’s action in Trenton and around the state.

Quote of the Day: “The county is not disagreeing or agreeing. We just want to see it in writing, we want to see what’s being proposed.” – Atlantic County Freeholder Frank Formica, on negotiations regarding the financial impact of the state takeover of Atlantic City.

How Sanders’s Pressure on Clinton Improves Booker’s VP Chances
All right, so she’s not inevitable. We get that now. But that’s not bad news for establishment New Jersey Democrats. In fact, the Bernie Sanders uprising more than anything to this point opens up a greater possibility for the promotion of one of their own. That is, of course, providing Sanders ultimately loses his fight for the Democratic nomination.
PolitickerNJ Editor Read more

The AC Takeover: What’s in a Name?
The original state takeover bill that Senate President Steve Sweeney (D-3) proposed for Atlantic City has been scrapped, and Governor Chris Christie has officially come down on the side of increased state oversight — as Sweeney made the trip down from Trenton to meet with the city council and Mayor Don Guardian this week, a few scant details of the new Atlantic City state ‘partnership’ emerged.
JT Aregood, PolitickerNJ Read more

Equal Pay for Women Bill is Prep Work for Next Guv, Say Sweeney and Weinberg
The only man in New Jersey politics sufficiently secure in his manhood to wear a lipstick pink tie stood amid a brace of female colleagues at Rutgers this morning in support of equal pay legislation championed by Senate Majority Leader Loretta Weinberg (D-37) on the anniversary of Lily Ledbetter Fair Play Act.
Max Pizarro, PolitickerNJ Read more

AG: Bloomfield Councilman Chalet Indicted
Acting Attorney General John J. Hoffman today announced the indictment of a Bloomfield Township councilman by a state grand jury for allegedly soliciting and accepting a bribe of $15,000 from a business owner, promising the owner that he would use his position on the council to ensure that the township went ahead with its planned purchase of the man’s commercial property.
Politicker Staff, PolitickerNJ Read more

Christie’s late pitch in Iowa may not be enough
There was little doubt about who won the support of a group of local Republicans congregating at the Sports Page bar Friday night: the Centennial High School girls basketball team.
Charles Stile, The Record Read more

Can Atlantic City rebound again?
As the bells on the “Starry Night” slot machine at the Caesars casino were ring-ding-dinging one afternoon last week, Judy Sahud felt far away from the humdrum and hard knocks of real life.
Mike Kelly, The Record Read more

N.J.’s political insiders crafting a strategy for Atlantic City
In recent months, a small circle of politicians in Trenton has worked behind closed doors to engineer a deal that could possibly end Atlantic City’s 40-year-old monopoly on casino gambling in New Jersey.
Jeff Pillets and John Brennan, The Record Read more

Will casino expansion kill Atlantic City, or those who beat it at its own game?
It’s just a 28-mile drive from the Resorts World Casino at Aqueduct Racetrack in Queens to the site adjacent to Liberty State Park where developers hope one day to build the first New Jersey casino outside of Atlantic City.
Ted Sherman, NJ.com Read more

Christie on Bridgegate from Iowa: ‘This was not a murder’
With just two days left before the Iowa caucuses, Gov. Chris Christie downplayed the 2013 George Washington Bridge lane closure scandal on Saturday evening as “a traffic jam” and “not a murder.”
Claude Brodesser-Akner, NJ.com Read more

Here’s how Christie can remain on the main debate stage
Gov. Chris Christie’s performance in New Hampshire, crucial to his chances of winning the Republican presidential nomination, also will determine whether he sits at the main table for next week’s final debate before the Feb. 9 primary.
Jonathan D. Salant, NJ.com Read more

Chris Christie’s secret campaign strategy: It’s all in the numbers
As we head into the Iowa caucuses on Monday, Chris Christie is running sixth in the most recent polls there. He’s also sixth in the polls for the New Hampshire primary eight days later.
Paul Mulshine, The Star Ledger Read more 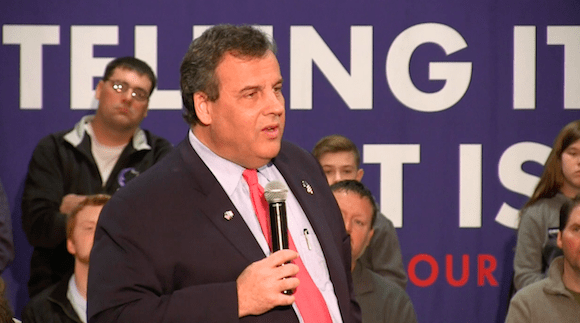