Good morning. It’s Wednesday, and in Trenton the reaction continues following Gov. Chris Christie’s State of the State speech and renewed talk of a state takeover of Atlantic City’s finances.

Assembly Fires Back at Christie After State of the State
Immediately after Governor Chris Christie’s state of the state address Tuesday afternoon, Assembly Speaker Vince Prieto (D-32) defended his caucus’ plan to amend the state constitution and require quarterly payments into public workers’ pension fund. Christie’s speech had been unsparing in its offensive against the plan, saying that it favored the “cynical leadership of a narrow constituency” in catering to unions.
JT Aregood, PolitickerNJ Read more

Reaction Mixed from South Jersey Dems After State of State
After an alternately sour and sympathetic state of the state address in which Governor Chris Christie attacked his state-level foes in the legislature while making impassioned appeals for a new drug rehabilitation center on the grounds of a former state prison, Democrats Vince Mazzeo (D-2) and Jeff Van Drew (D-1) said they were weighing each of the governor’s recommendations on its own merits.
JT Aregood, PolitickerNJ Read more

Leaders Trade Veiled and Not-So-Veiled Jabs at Assembly Reorganization
At the reorganization of the state Assembly for the new legislative session, the leaders of the historic Democratic majority touted its early morning compromise on casino gaming expansion, while Minority Leader Jon Bramnick (R-21) reiterated his criticisms of the Democrats’ suite of proposed constitutional amendments.
JT Aregood, PolitickerNJ Read more

What Every Trenton Newbie Should Know
Today we’ll swear in New Jersey’s General Assembly, including the newest members who’ll take their oath-of-office at Trenton’s Memorial Theater. These tend to be convivial affairs where neophytes bus their friends and family up to witness with wide eyes what’s likely become boring for the veterans. I’ve covered a half-dozen of these things and two stand out: 2008 (because it was 75 degrees in January and everyone was in a heavenly mood) and 2014 when the ceremony came on the heels of Governor Chris Christie’s BridgeGate scandal which basically cast a sad pall on the entire event.
Jay Lassiter, PolitickerNJ Read more

Opinion: NJ PBA Prez Colligan Zaps Christie Ahead of State of the State
Today, New Jersey Governor Chris Christie is preparing to give a State of the State address to New Jerseyans. As of last count, Governor Christie has spent over 250 days outside of his home state campaigning for president. While Christie has been pursuing his political aspirations in New Hampshire and other primary states, the 33,000+ members of the New Jersey State Policemen’s Benevolent Association (NJSPBA) wanted to take an opportunity to “Tell It Like It Is.”
Pat Colligan, PolitickerNJ Read more

FDU Poll: in NJ, 59% Disapprove of Christie
With the stakes high for Governor Chris Christie the most recent statewide survey of registered voters from Fairleigh Dickinson University’s PublicMind finds few in New Jersey approve of his job performance, and many think his leadership warrants nothing more than a middling grade. Moreover, a majority rates his performance as only fair or poor in the Republican debates.
Politicker Staff, PolitickerNJ Read more

Mejia Savages Christie in Front of the Statehouse
In the lead up to Gov. Chris Christie’s State of the State Address, New Jersey Working Families Executive Director Analilia Mejia led a rally in the cold outside the Statehouse, throwing a one two punch at Christie’s absenteeism and his policy record.
Max Pizarro, PolitickerNJ Read more

Republican Cino Files to Run Against Garrett in CD5
Democrats are running former Clinton speechwriter Josh Gottheimer in the 5th Congressional District, where they plan to put big money against what they assume will be the incumbent in the general election.
Max Pizarro, PolitickerNJ Read more

Sarlo in the Aftermath: Where was TTF?
State Senator Paul Sarlo (D-36) noted that he’s long backed the abolition of the estate tax, which Gov. Chris Christie called for in his State of the State Address this afternoon.
Max Pizarro, PolitickerNJ Read more

Attorney: Prosecutors’ list of ‘unindicted coconspirators’ in GWB lane closure scandal should be made public
Prosecutors have handed over a secret list of names of people suspected of involvement — but not charged — in an alleged politically-motivated conspiracy to close access lanes to the George Washington Bridge.
Paul Berger, The Record Read more

What’s next for new Jersey paid sick leave bill?
The failure to advance a sick leave bill feared by business leaders but once touted by state New Jersey Assembly Speaker Vincent Prieto as a top legislative priority has left both sides wondering what comes next.
Hugh R. Morley, The Record Read more

Bill to honor fallen officers heads to governor’s desk
A bill that is named after the late Mount Arlington Police Officer Joseph Wargo Jr. and would allow for permanent roadside memorials for police, EMTs and firefighters killed in the line of duty has been unanimously passed by the state Assembly and awaits a signature by Gov. Chris Christie.
Peggy Wright, Daily Record Read more

Atlantic City Mayor: This is our Pearl Harbor
The news overnight from Trenton left local leaders rattled in Atlantic City – yet another proposal by the state to storm the beaches of the casino resort that is already under two layers of state monitoring.
Amy S. Rosenberg and Andrew Seidman, Philadelphia Inquirer Read more 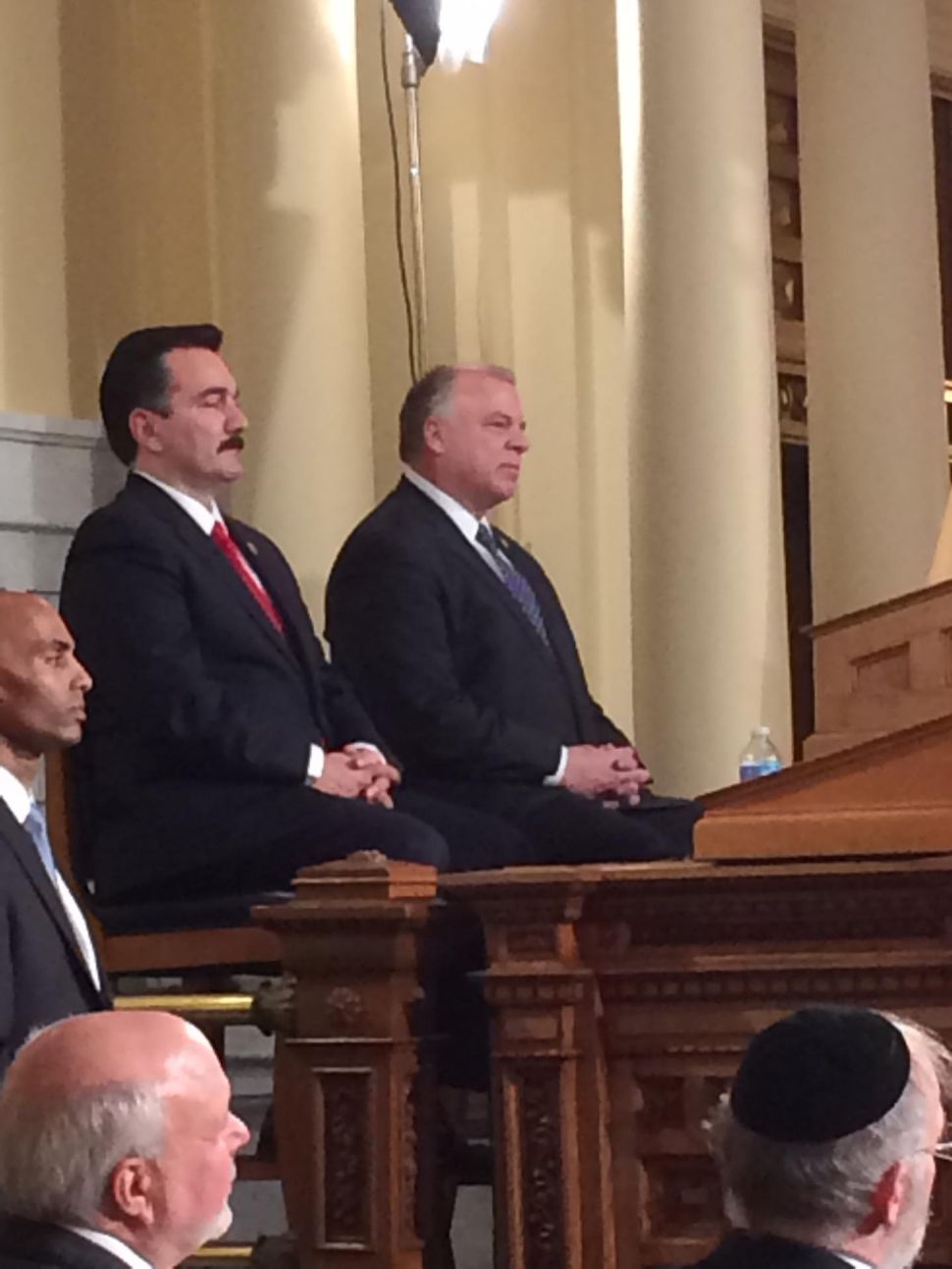