Good Friday morning here in New Jersey, where there’s drama among the Bergen County GOP and we speculate what Gov. Chris Christie’s next move might be.

Quote of the Day: “It is not something that I am jumping in to but at this point if you ask me if it is likely or unlikely that I will run, I will tell you it is very likely that I will run,” – Assemblyman Paul DiGaetano, on the likelihood of his pursuing the chairmanship of the Bergen County Republican Organization.

Will the Fight for BCRO Chair Impact Bergen’s Upcoming Elections?
While 2016 is only three weeks in, the year has not been kind to Bergen County’s already ailing Republican Party. The Bergen County Republican Organization (BCRO) has received one bit of bad news after the other: Freeholder John Felice wasn’t going to pursue reelection, Sheriff Michael Saudino was switching parties to join the ranks of Bergen’s Democrats and state Senator Kevin O’Toole (R-40) announced that he wouldn’t pursue reelection in 2017, causing uncertainly in the already shaky ranks.
Alyana Alfaro, PolitickerNJ Read more

‘A Brief History of Time’ (As it Pertains to the 2016 Political Debacle) Part I
The announcement out of Florida that Jeb Bush would be running for president all but finished Chris Christie among that set of bar stool establishment Republicans in New Jersey who keenly respect that nexus of money and influence in American politics.
PolitickerNJ Editor, PolitickerNJ Read more

‘Very Likely’ DiGaetano Will Pursue BCRO Chairmanship
Wyckoff Mayor Kevin Rooney was the first to announce he would be challenging Bergen County Republican Organization Chairman Bob Yudin for the position he has held for the past eight years. Now, it seems likely that former Assemblyman Paul DiGaetano may be the next to throw his hat in the ring for the position.
Alyana Alfaro, PolitickerNJ Read more

With Christie Treading in the Polls, What’s Next After New Hampshire?
As the New Hampshire primary approaches and Governor Chris Christie prepares for his best shot at turning the tables and pulling ahead of the middle tier in the Republican presidential primaries, the numbers are pointing to a tough row for the governor to hoe. The latest national Monmouth poll shows Christie tied for fourth place with Ohio Governor John Kasich and former Arkansas Governor Mike Huckabee at three percent. If the pattern holds and Christie’s resurgence dissipates, does anyone stand to gain from his endorsement?
JT Aregood, PolitickerNJ Read more

Christie to keep schedule in New Hampshire during New Jersey storm
Governor Christie plans to spend the coming winter storm in New Hampshire and has lined up town hall events there throughout what is forecast to be a snowbound weekend, according to his presidential campaign schedule.
Salvador Rizzo, PolitickerNJ Read more

Why did N.J. miss out on $300M in federal Hurricane Sandy aid?
New Jersey got only $15 million of the $326 million requested in disaster relief under a program funded in the Hurricane Sandy aid package in part because the state submitted “a weaker application,” a top federal official said Thursday.
Jonathan D. Salant, NJ.com Read more 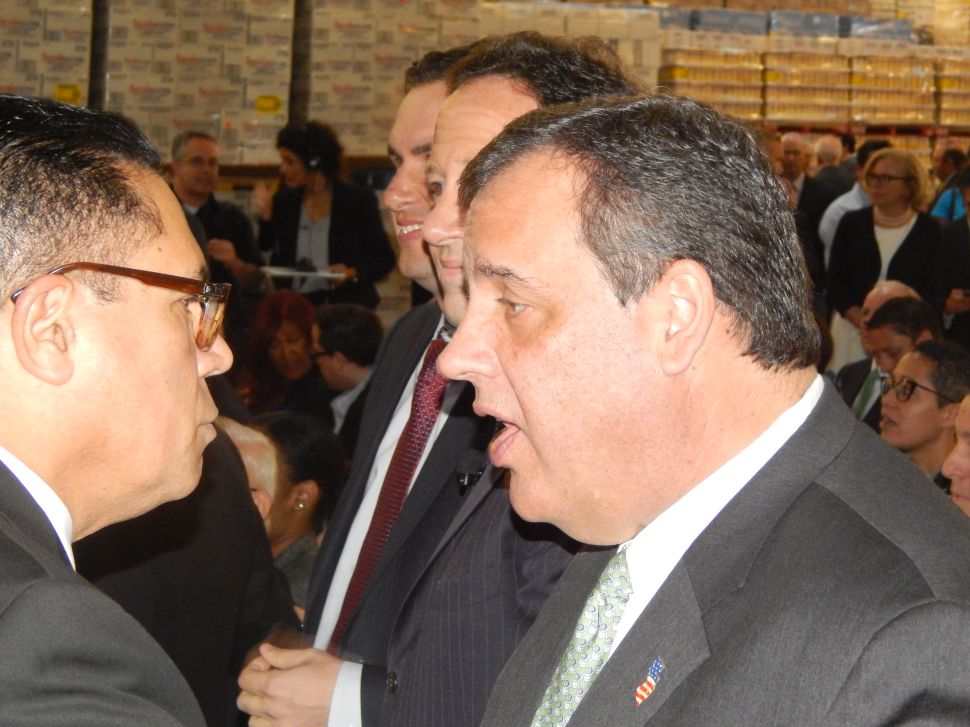