It is easy to understand the impression many have that the level of civility in political discourse in this country has reached previously unplumbed depths. The current races for the presidential nominations have done nothing to alter this perception and, indeed, suggest there is still some way yet to the bottom. As disheartening as the dismal spectacle being played out on todays’ political stage may be, the republic has endured even more wretched behavior among its elected officials and candidates for office.

Throughout its short history the U.S. has seen its political representatives engage in a number of deplorable activities, such as devastating smear tactics, brawling in chambers, dueling and inappropriate sexual behavior. Few campaigns, however, match the viciousness and venality of the Election of 1828, almost 200 years ago. This sordid election was the misbegotten offspring of the Election of 1824. In that contest, which occurred before the two party system had come into existence, there had been four candidates. Andrew Jackson had handily won both the popular vote and the most electoral votes BUT not the majority of the electoral votes as mandated by the Constitution. As a result, the election would be decided in the House of Representatives.

The Constitution accorded each state one vote with the winner being the candidate with the majority. In a proverbial ‘deal with the devil,’ Henry Clay, the powerful Speaker of the House and longtime foe of Mr. Jackson, made a deal with John Quincy Adams to muscle up enough votes to obtain the Presidency for Mr. Adams. Mr. Adams had been the runner up in the popular vote and, in return, he agreed to appoint Mr. Clay Secretary of State—a position the ambitious Mr. Clay saw as a critical stepping stone to his own presidency. Mr. Clay delivered the votes, Mr. Adams became President and appointed Mr. Clay his Secretary of State. The Jacksonians howled corruption loudly and liberally and kept up those howls over the years until the next presidential election.

Mr. Jackson accused Mr. Clay and Mr. Adams of fixing the 1824 election to rob Mr. Jackson of the Presidency. Mr. Jackson ran again on a platform of reforming the government in 1828. The reaction of the Adams’ camp to counter Mr. Jackson’s charges of corruption was to publicly attack the reputations of Mr. Jackson and his family. This strategy was greatly facilitated by the dramatic increase in the number of newspapers across the nation.

The Adams coalition got right to work. A banquet of transgressions by the old soldier Jackson were laid out for public consumption: executing innocent soldiers under his command; defrauding the military; murdering Indians; and committing a series of lesser transgressions, many of which Jackson was guilty of, such as dueling, drinking, swearing and gambling.

In the Jacksonian press President Adams was awarded the sobriquet ‘The Pimp of the Coalition.’

Attacks of this nature, defamatory as they might be, the combative Mr. Jackson could understand and withstand. The old general was a hardened veteran of many fights, both political and military, and he gloried in combat of any sort. But he was almost unmanned by the reprehensible and wildly virulent attacks by Mr. Adams’ gang on the two people he loved most in his life—his mother and his pious wife of 35 years, Rachel.

His mother, who had died nursing American prisoners of war on British ships, was called out as a ‘common prostitute’ brought to the American colonies by British soldiers as their plaything. Upon settling in this country Mr. Jackson’s opponents let out that she had married a mulatto man with whom she had a child—Andrew Jackson. Rachel herself was charged as being both an adulteress and a bigamist who had deserted her husband to live with Jackson and then married Mr. Jackson while still married to her first husband. These charges sent Mr. Jackson into tears and Rachel into repeated hysterics which are thought to have fatally undermined her health.

The Jackson partisans met these assaults on Mr. Jackson and his family head on. In addition to the run of the mill charges that Adams was a drunk, a religious bigot, a breaker of the Sabbath and a host of many other moral failings, they let out the outrageous slur that while minister to the court of the Russian Czar, Mr. Adams had pimped an American girl to Alexander I. In the Jacksonian press President Adams was awarded the sobriquet “The Pimp of the Coalition.”

In the end Mr. Jackson won the slog through campaign filth and became the seventh President of the United States. But the cost of this achievement was frightful. Shortly after his victory Rachel fell ill and died. A distraught Mr. Jackson charged that it was the attacks by the Adams’ faction that had killed her.

The country moved on from this cesspool of an election, a tentative civility among the political class was restored and the country was soon flexing its young and enormous muscles in the glorious cause of manifest destiny. Perhaps history can give us hope that the inane squabbles which infect the current body political too will pass and the Nation will heal.

Howard Weir, an attorney in Washington DC, is the author of the recently published, A PARADISE OF BLOOD, The Creek War of 1813-1814. 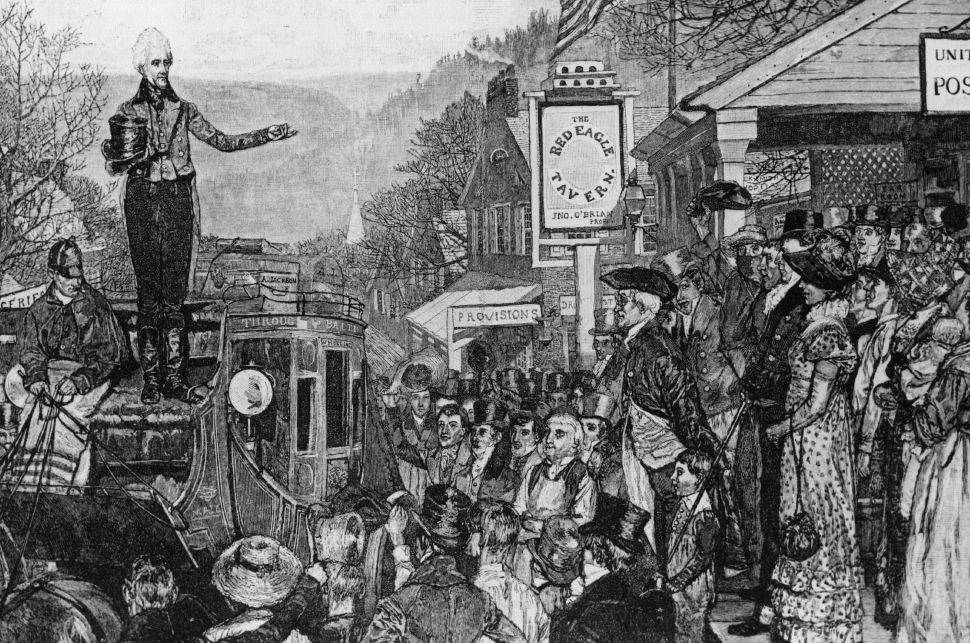