I am not a selfish guy and I will be #GivingAway some of my winnings to every person who retweets this! #Powerball pic.twitter.com/hEaPIfuZ08

It’s been confirmed there are three lucky winners of the record-breaking $1.5 million Powerball jackpot. This man, Erik Bragg, claims to be the one from Chino Hills, California. We’re pretty positive, however, that he is not.

First off, who is Eric Bragg? He’s a famous skateboarder and Instagram star. He’s in a cover band that’s opened for Lil Wayne at Redbull-sponsored events. He directed a movie that made it to number four on the Itunes chart. He’s a brand ambassador for Grey Goose vodka and does autograph signings. He’s been featured in Vanity Fair and has posed for Terry Richardson.

With all of this going for him and his huge Instagram following, it’s no surprise the photo of what he alleges is a winning ticket skyrocketed to viral fame. After promising to share some of the winnings with whoever shared the photos, he’s already seen just shy of 100K RTs.

And naturally, with all of that attention came speculation. The Internet has been picking apart his ticket, and what’s been noticed acts as pretty convincing evidence that the ticket was digitally altered to display the winning numbers.

Five letters. Only one number set. If you take a close look at the ticket in the photo, you’ll notice letters A through E listed on the left. As multiple Redditors have pointed out, if there are five letters there, there should be five sets of numbers, but there’s only one—the winning set.

The price. As mentioned, there are places for five sets of numbers, which would cost $10 to purchase. The ticket say it was purchased for only $2, however.

The zeros look “funny,” some have said.

And so do the fours. And the one. If you zoom in very close, you can see a difference in color around 04 and 34. It doesn’t look like they were originally there. The same has been said about the 19.

Basically, there’s a lot about this ticket that doesn’t add up. We’ve reached out to Mr. Bragg for comment and have yet to hear back. 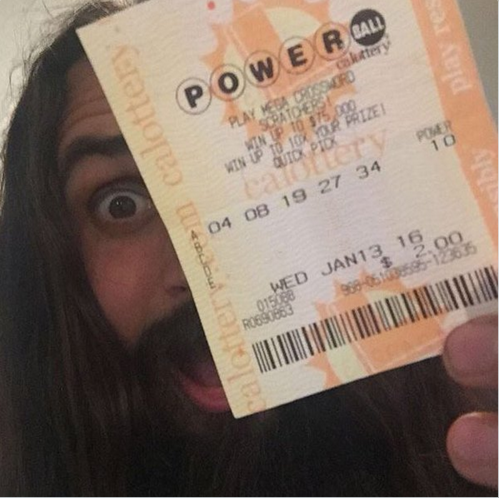