They seemed to stand together on a last strand on the western side of the state, a pair of GOP outlaws with the flat shadows of mostly barren downtown Flemington creating angles usually associated with Sam Peckinpaw pictures featuring Gordon MacCrae and Randolph Scott.

That was 2009 when Steve Lonegan (pictured far right) and Mike Doherty (next to Lonegan) occupied space on the steps of that same Hunterdon County Courthouse where a jury sent Bruno Hauptmann to the chair for the Lindbergh baby murder. Lonegan was running for governor in the Republican Primary and Doherty for state senate, the two of them  united against the candidacy of establishment candidate Chris Christie and his allies, and indefatigably joined in the cause of movement conservatism. The cause would wind them into one another’s paths in the coming years – through some more feuds and stopgap friendships with Christie and his pals and a few political heartbreaks and finally deposit them into 2016 presidential politics, this time on opposing sides of a Republican Primary and once again in opposition to New Jersey’s Republican governor.

Doherty won that race in 2009 as a candidate for state senate, up against a Hunterdon-Warren GOP establishment affiliated with the hard charging former U.S. Attorney Christie. Lonegan lost the primary to Christie but beat him in western northern New Jersey, that enclave of stuffed bears mounted on walls and muskets hanging over brick fireplaces.

There was a definite symbiosis.

Now, with two weeks to go before the Iowa Republican Presidential Primary and as the New Jersey Republican establishment mostly drearily lines up behind Christie’s presidential candidacy (“I don’t want to back him, but what am I supposed to do?” one pol fretted to PolitickerNJ. “When he loses he’ll come back to New Jersey and cut my b*lls off!”), contrarians Doherty backs Donald Trump for president and Lonegan backs Ted Cruz.

The two guys marginalized by the party pooh-bahs in their home state once again oppose Christie, but this time their national-scale candidates don’t look like Ron and Rand Paul spin-offs who have no hope of becoming their party’s nominee.

Trump and Cruz, in fact, are in an Iowa dogfight for first place, both of them driving their anti-Washington establishment message, sucking the fiber out of tennis club darling Jeb Bush and setting the likes of Bush, Christie, John Kasich and Marco Rubio into an utter self-cannibalizing of the Republican Party establishment, with Bush the most obviously thoroughly charred funeral pyre victim.

But within their own enjoyment of the center circus tent and mutual delight in apparently depriving of claws and teeth the Republican Party establishment, a decided angry edge exists in the national-level rivalry of Trump and Cruz that comes across in conversations with their two long recognizable New Jersey reps. Never formally associated with the conservative movement until he became a Republican candidate for president, Trump doesn’t mind nursing the political flotsam out there that puts Trump at the top of a Trump-Cruz ticket. But Cruz wants nothing to do with Trump.

“I think Donald Trump is a winner,” Doherty told PolitickerNJ. “He’s dynamic, funny and authentic. Most feel the Washington establish has really let us down, particularly in the area of immigration. Millions are coming into this country when we can barely take care of our own. American families are making a lot less now than years ago. Also, when it comes to foreign policy – and I supported Ron Paul – this idea that the U.S. has to jump in every overseas conflict. Who cares who controls a small island in the Sea of Japan? Only when U.S. national security interest is really on the line should we go to war. We should have left Saddam Hussein in power.

“I know he [Trump] and Cruz are battling right now, but I truly hope they form a Trump-Cruz ticket,” Doherty added. “It would inspire the base and give Republicans an anti-establishment general election message.”

Doherty did take a swipe at Cruz on the foreign policy front, where the retired U.S. Army captain believes his candidate takes a better non- interventionist stand.

“Cruz is more of an interventionist/neocon who recently has been changing his view to be more like Donald Trump,” the senator said.  “The other thing I would say is given the undue influence of Wall Street on politics, I wonder how Cruz would be with some of those abuses. I think trump isn’t beholden to the banker class but perhaps Cruz, with his Goldman Sachs wife, would be.”

Still, Doherty likes Cruz. He’s essentially comfortable with him above and behind other Republicans in the contest.

“I’m a little disappointed with the two battling each other,” he said. “I hope they knock it off. The two of them united would really send a message to the Washington establishment that we really reject those Jeb-like candidates they were trying to jam down on our throats.”

For Lonegan’s part, Trump is very nearly a nonstarter.

“I think the three critical characteristics with Cruz are integrity, leadership and consistency,” said the 2009 candidate for governor and 2013 Republican nominee for U.S. Senate. “Ted Cruz has the highest level of integrity. This is a man who turned to God when his father left his family. He turned to Jesus Christ rather than become a JD.”

“This is a man who memorized the U.S. Constitution at 15,” said Lonegan.

Was he irritated when Cruz shut down government in the days leading up to the 2013 U.S. Senate election, when Cory Booker bested him by 11 points?

“Our whole strategy was to come out swinging against Obamacare and, yeah, Ted Cruz led the effort to shut down government, which hurt us because people didn’t like that. People blamed us and I suffered the consequences.

“I’m probably the biggest casualty in the country of Cruz’s effort,” said Lonegan, who admits he “probably” would have lost the contest to Booker anyway.

But he didn’t take long to get refocused on Trump.

“Trump is big on eminent domain, and government take private property for private development,” Lonegan said. “The other thing is he has a long record of backing Democrats. He’s supported – financially – Hillary Clinton, Cuomo, Harry Reid, Charlie Rangel and he endorsed Bil DeBlasio. He endorsed Bill DeBlasio! Talk about a lack of consistency. He never led on a single Republican issue, and that’s disturbing.

“There’s a huge, huge difference between these two candidates,” he added.

Their divergence hasn’t shut down the friendship the two men have, a union threatened more when Doherty briefly backed Christie legislatively – to his own later regret, a path Lonegan himself forged as a Senate candidate; and then when Doherty refused to publicly back Lonegan’s 3rd Congressional District trampling.

They still find themselves immersed in the same cause.

“Steve was really a leader in the conservative movement in New Jersey, and had an interesting position at Americans for Prosperity that he really used constructively statewide. It gave him a platform,” Doherty said. “Steve is still a conservative leader, but after his runs for governor, senate, and congress I think the guy ran out of juice for awhile. Who could blame him? I don’t know who could have advanced conservative causes that way for that period of time and not burn out.

“We had a cordial conversation a short time ago, and yes, he was upset when he jumped into that congressional race and I didn’t want to jump into the race. But at the end I’ve been there 99 times out of 100 with him. I just thought in that one instance it was an over stretch. I’m from North Jersey jumping into a South Jersey race? I didn’t see it.

“But I hope we work together on a Trump-Cruz ticket,” the senator added.

For his part, Lonegan sees his alliance with Doherty remaining intact in the coming years, but he doesn’t want Cruz occupying a second banana role on a stage with Trump.  “I respect Mike a lot and we will continue to be allies,” Lonegan said. “But Trump, no, I don’t [want to see a Trump-Cruz or even a Cruz-Trump ticket].

“I actually think Trump’s inconsistent deal-making, campaign contributions and cutting deals with Democrats are creepy,” he said. “I want someone who’s going to stand up for principles and ideals. Remember, as a mayor and activist I led the fight to ban the use of eminent domain. Trump’s the kind of guy who will take over and bulldozes someone’s home so he can build a parking lot for his limo. It’s very disturbing. His views are crazy and reactionary and seemed to be based on the concept that the American president has authoritarian power. That’s antithetical to America and the kind of mind sight threatening to the future of the country.

“In a crowd of people, I can pick the people Trump out of the room,” Lonegan added. “They think problems can be solved by a monarch president who can come in and kick everyone down. That’s not the way it works.”

As the only elected official in the legislature with Trump, amid same-party allies mostly passively or reluctantly supportive of Christie’s prez run, Doherty recently served as the real estate tycoon’s stand-in when Trump received induction into the New Jersey Boxing Hall of Fame Induction in Garfield.

But what about his candidate’s comments about Muslims and his view that they should be blockaded from the United States?

“I think Donald Trump likes to say things big with sizzle,” Doherty said. “He says things strongly. On the muslim thing, I would have sliced the apple differently, and spoken about supporting a temporary total moratorium on all immigration. We have tens of millions of people coming in and no idea how they got here. Let’s enact a temporary pause on immigration until we can get control of the situation. This was something that was done at times from the 1920’s to the 1960s. My point is I would have made a broader statement, which would have eliminated opportunity for opposition to get back at you. The Muslim comment, that made him an easy target.” 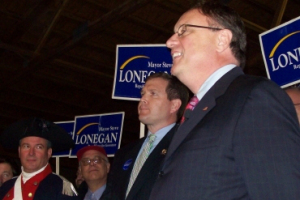