Ladies and gentlemen, make no mistake about it. As a Washington insider who has never been a fan of the political and financial establishments that run this town, I can report there is genuine alarm that can be fairly called panic from the Democratic and Republican establishments in Washington.

After so many change elections that brought no change great masses of people with pitchforks are surrounding the establishment that rules the capital of the nation.

They have lost control, and they know it, and nobody knows what the hell will happen in this election, which scares the hell out of the establishment, as it should.

Don’t believe the smug expressions of confidence that are a ritual of establishment powers who say “Everything is under control. Our party will win.”

In fact they have lost control, and they know it, and nobody knows what the hell will happen in this election, which scares the hell out of the establishment, as it should. Beneath the calm and knowing exterior of establishment power players there is a panicked hysteria that those they condescendingly consider ‘the inmates’ will take over ‘the asylum’ they are no longer confident they run.

Hillary Clinton, the anointed candidate of the Democratic establishment whose march towards the nomination was once viewed as inevitable, is now under siege from the surging populist Bernie Sanders who may well stun the political world with victories in the Iowa caucus and the New Hampshire primary. Ms. Clinton, whose trust ratings are dangerously low for any potential nominee, is responding to her travail with the ill-chosen strategy of going almost entirely negative against the surging Mr. Sanders—a strategy I disclose to readers that I have aggressively argued against to people very close to the Clintons.

Obviously, I warned Team Clinton, if she goes negative against Mr. Sanders voters will soon be hearing about her highly paid speeches to Wall Street firms and her six years of support for the Iraq war. And that is what is happening today.

On the GOP side, Republican leaders and most of their largest corporate campaign donors are scared stiff that their party could be taken over by Donald Trump or Ted Cruz.

Jeb Bush, once the anointed candidate of the GOP establishment, has performed so poorly he faces the danger of becoming an asterisk in the polls.

On the GOP side, Republican leaders and most of their largest corporate campaign donors are scared stiff that their party could be taken over by Donald Trump or Ted Cruz, currently unchallenged as GOP frontrunners who Republican insiders fear are hostile to their interests and could lead their party to a landslide defeat.

On the Democratic side Democratic leaders and their coteries or large donors and revolving door lobbyists are afraid and alarmed by two threats, first that the Democratic nominee might actually become the ultimate anti-corporatist, anti-lobbyist, anti-establishment populist Bernie Sanders, and second that their champion Hillary Clinton has been a weak candidate who might wake up one day to a devastating front page story about the Clinton emails, which is unlikely but certainly possible.

The conservative establishment in Washington and nationally, which should never be underestimated in American politics, is similarly gripped by fear and loathing from competing factions.

One group believes Mr. Trump is not remotely close to a legitimate conservative and seeks to con the conservative movement. This view is expressed today in a must-read issue of National Review in which a premier list of prominent conservatives make the case against Trump. And these conservatives are terrified that a number of recent polls show Mr. Sanders and even Ms. Clinton so far ahead of Mr. Trump that his nomination could return power in Congress to liberals and Democrats.

Rule number one of politics is that when a candidate with low trust and high negative ratings, like Ms. Clinton, launches aggressive negative attacks against a more liked opponent, which Mr. Sanders is, those attacks usually backfire.

The second group believes Mr. Cruz has become the most hated politician in the Senate, equally despised by Senate Republicans and Democrats for good reason, and fear that when American voters understand those reasons Democrats will win a landslide victory in November. This view was recently expressed by Iowa Republican governor Terry Branstad and supported by Mr. Republican himself, former Senate leader and GOP presidential nominee Bob Dole, both of whom urgently called for the defeat of Mr. Cruz. Senator Dole implied he might do the unthinkable and support Mr. Trump to save the party from Mr. Cruz!

The GOP establishment is terrified that their favorite son Jeb Bush has been such an abysmal candidate while their preferred alternative, Senator Marco Rubio, who Democrats fear the most as a GOP nominee, is not catching fire or looking presidential. They see their other alternatives, Ohio governor John Kasich and New Jersey governor Chris Christie bunched together with Messrs. Bush and Rubio in polls far behind the frontrunners and thereby cancelling each other out, leaving Messrs. Trump and Cruz to dominate the GOP contest.

Woe to political hacks who think voters are stupid.

On the Democratic side Mr. Sanders is within reach of a double-header victory in Iowa and New Hampshire that could set loose forces that the Democratic establishment might not be able to control. Instead of inspiring voters with an uplifting message and vision of what her presidency could do to lift the nation, which Mr. Sanders is doing and Ms. Clinton has failed to do, she has resorted to running as though she wants to serve the third term of President Obama, not a shrewd plan based on the history of candidates trying to succeed a president of their party, and has reverted to hackneyed attacks against Mr. Sanders that are not credible and are often dishonest.

Rule 1 of politics is that when a candidate with low trust ratings and high negative ratings, as Ms. Clinton does, launches aggressive negative attacks against a more trusted and liked opponent, which Mr. Sanders is, those attacks usually backfire.

For example, Mr. Sanders begins airing an ad in Iowa that is based on the Simon and Garfunkel song America. It is brilliant and moving and may well someday be compared to the Ronald Reagan Morning in America ad. The Sanders ad offers a positive closing message for the Iowa caucus showing large numbers of Sanders supporters feeling they are part of something worthy and noble and exciting.

How is Team Clinton responding? Instead of offering a competing positive and moving ad for Ms. Clinton the leader of a major pro-Clinton Super PAC, David Brock, attacks the ad—falsely—claiming it does not include enough black voters. Anyone who watches the ad—and the ad is so compelling that voters will want to see the ad multiple times—would know that with this charge Mr. Brock is telling a bald-faced lie because there are citizens of all kinds, including blacks, prominently featured. Woe to political hacks who think voters are stupid.

Ms. Clinton needs to offer a clear and compelling progressive message about what she stands for and where she would lead the nation, not offer a non-stop negative attack against Ms. Sanders backed by a lie told by a Super PAC hatchet man.

Both Mr. Sanders and Ms. Clinton will have a big moment on Monday when they appear together on CNN for the kind of debate that the Democratic establishment tried to prevent through the bungled favoritism of Democratic National Committee Chair Debbie Wasserman Schultz. Until recently the DNC tried to enforce the ludicrous strategy of having as few debates as possible, scheduled to be seen by as few voters as possible. This was the ultimate symbol of the Democratic establishment trying to fix the game for Ms. Clinton and against Mr. Sanders, and now that it failed, the establishment wants more debates to advance the flagging campaign of Ms. Clinton. It is called poetic justice.

The truth is that with the real voting only days away, the day of reckoning is approaching the establishments of both parties like the Titanic approaching the iceberg. The anti-establishment armies are on the march and the establishment forces are on the run. Only one thing is certain as the presidential campaign begins in earnest: when the American choose their president the people will rule, and that prospect now scares the hell out of the political establishments of both parties and anyone who denies this ain’t telling you the truth. 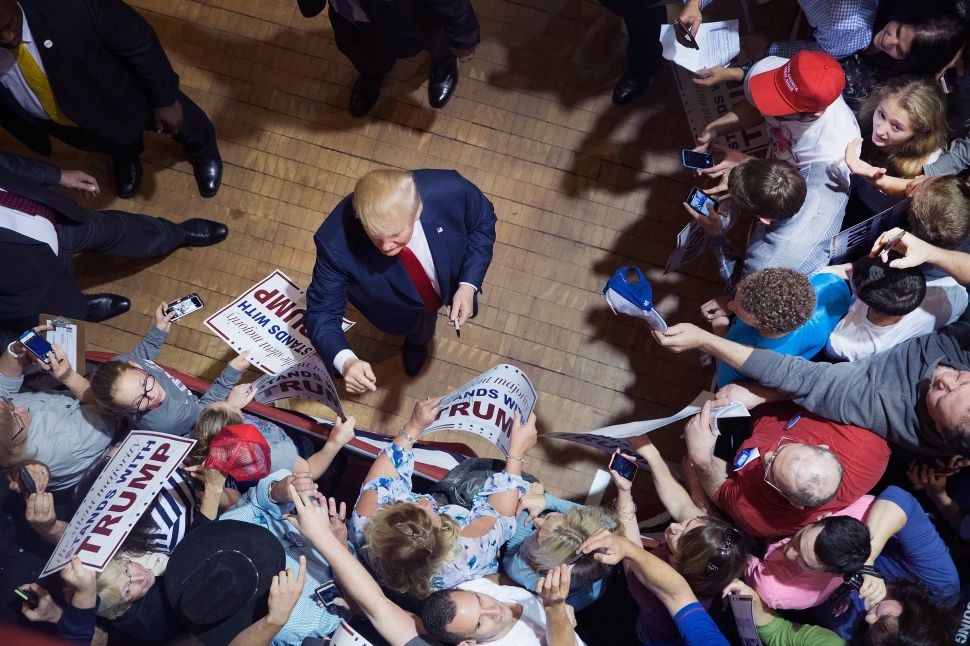