“There is a tide in the affairs of men.

Which, taken at the flood, leads on to fortune;

Omitted, all the voyage of their life

Is bound in shallows and in miseries.

On such a full sea are we now afloat,

And we must take the current when it serves,

Or lose our ventures.”

Elizabeth Warren should endorse the presidential candidacy of Bernie Sanders before the New Hampshire primary or, in the alternative, Mr. Sanders should publicly state that if he receives the Democratic nomination his first act will be to ask Ms. Warren to run with him as his vice-presidential nominee in a historic and revolutionary campaign to bring back the spirit of Theodore Roosevelt, Franklin Delano Roosevelt and John F. Kennedy to the leadership of the nation.

The coming weeks will be one of the most important moments in the history of the American progressive movement.

Hillary Clinton will begin her inevitable move toward the right, guided by her corporatist campaign consultants.

It is possible Mr. Sanders will win both the Iowa caucus and the New Hampshire, shock the political world, electrify the Democratic party and turn the presidential campaign from a sickening spectacle of personal insults and phony politics into a forum to create and bring to power a new progressive populist majority.

It is also possible Mr. Sanders will ultimately lose the Iowa caucus and New Hampshire primary, proceed to lose the Southern primaries that follow, and cease to be viable candidate for the presidency, in which case a triumphant Hillary Clinton will shift her tactics and begin her inevitable move toward the right with the false belief, guided by her corporatist campaign consultants, that this would be her path to victory in November.

According to the John F. Kennedy Presidential Library, one of the favorite quotes of President Kennedy and Robert Kennedy was their version of one from Dante’s Inferno: the hottest places in hell are reserved for those who in times of moral crisis preserve their neutrality.

With the future of the Democratic Party and the nation hanging in the balance, now is the time for Ms. Warren to end her neutrality in the presidential campaign and endorse Mr. Sanders, or for Mr. Sanders to take the revolutionary act and say that if nominated he would offer her the vice presidential nomination and seek to run on a Sanders-Warren ticket.

Revolutions are won by boldness and daring that excites and mobilizes vast numbers of people behind causes that lift their lives and transform the future of their country.

Here is what almost certainly happens if either of my suggestions becomes reality in the next few weeks:

On the morning after the New Hampshire primary, a triumphant Mr. Sanders and Ms. Warren will be standing on a platform in New Hampshire celebrating a great victory and taking their progressive populist vision from one corner of the nation to the other.

The citizen-small donors who support the Sanders campaign will pour oceans of money into the coffers of his campaign that will shatter all historic records and create a true revolution in the history of campaign finance that would be one of the most democratizing events in America since Jefferson put pen to paper.

The ratings-hungry corporatists and sensationalists who run political television and have turned TV political coverage into a distasteful freak show of falsehoods and insults will swarm over the Sanders-Warren victory like bees swarm to honey and take the Sanders-Warren message of government of the people, by the people and for the people to every living room across the nation.

In an era when progressive populism has waves of support from voters that is not reflected by traditional politicians or media that covers them, suddenly—in what will appear as an immaculate conception to the old guard of conventional politics and media—the people of the nation will finally be presented with a choice for change that has a chance of prevailing and not echo of a decrepit status quo that seems to always prevail no matter how powerfully the voters express their demands for change.

John Lennon once asked: “You say you want a revolution?” Revolutions, from 1776 until today, are not won by caution or calculation. They are won by boldness and daring that excites and mobilizes vast numbers of people behind causes that lift their lives and transform the future of their country.

If they come together before the New Hampshire primary the result will be a modern Lexington and Concord with revolutionary impact—in deed as well as words—that would bring real change that voters can truly believe in.

I strongly supported the selection of Elizabeth Warren to lead the consumer protection agency that was born from her vision. That did not happen. Then I was one of the first columnists to call for a draft movement to bring her to the Senate seat once held by the incomparable giant Ted Kennedy. That did happen—and ever since then I have proudly written of Ms. Warren as the conscience of the Senate, which she is and will always remain so long as she serves in what was once called the great deliberative body but is now a Republican-controlled bastion of obstruction and dysfunction.

Some Democrats have suggested, incorrectly in my view, that the best course for Ms. Warren is to remain neutral in the presidential race to “preserve her influence.” I believe this is nonsense. In the Republican-dominated Senate, through no fault of her own, no progressive senator has any influence at this time. Similarly, if Ms. Clinton sweeps to victory in Iowa and New Hampshire and becomes the de facto nominee shortly thereafter, many in the liberal base will be deeply disillusioned as Ms. Clinton begins her move to the right, confident that liberals have no place else to go in a general election against Republicans.

By contrast, if the scenario I suggest unfolds, Ms. Clinton will almost immediately take more forceful progressive positions to meet the challenge, which would make her a better and more progressive candidate and, in my view, a more electable nominee and better president if she is ultimately nominated and elected.

In the scenario I suggest the influence of both Mr. Sanders and Ms. Warren would skyrocket no matter which candidate receives the nomination.

If Mr. Sanders receives the nomination with a victorious progressive populist surge their influence would soar with the potential to lead the nation to a new era of historic progressive leadership.

If Ms. Clinton receives the nomination Mr. Sanders and Ms. Warren would be absolutely essential to her general election victory by first encouraging her to campaign on a strongly progressive agenda and then rousing all liberals and Democrats to come to the polls with an enthusiasm that only they can generate at the presidential campaign level.

You say you want a revolution? The joining together of Mr. Sanders and Ms. Warren, one way of the other, is by far the best way to make it happen! 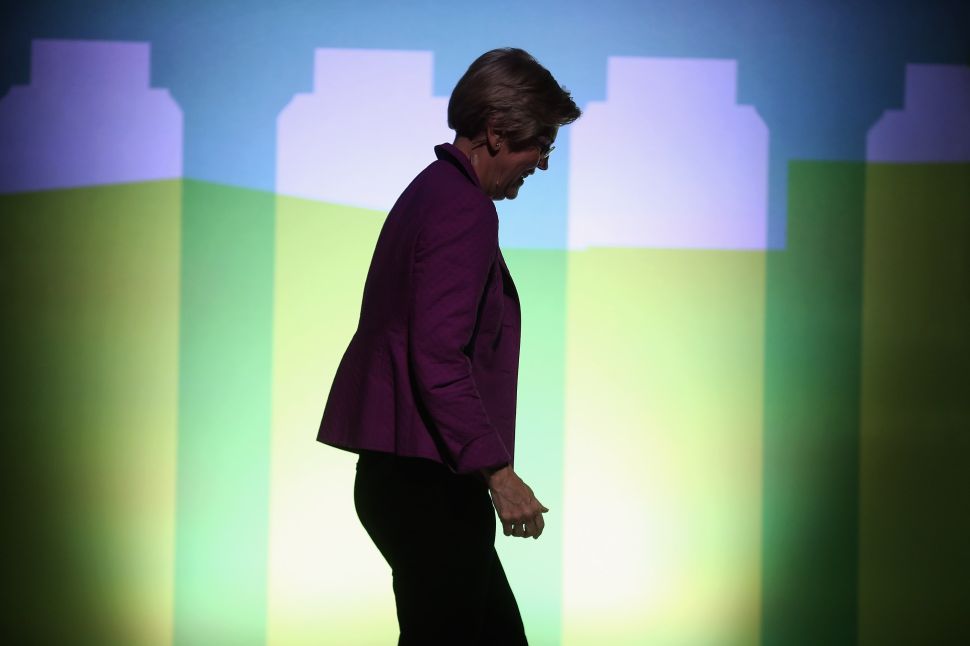