Musicians of the pre-paparazzi era kept strict control over what photos came out of their sessions, both backstage and on stage. But after a week together Bowie put his full trust in photographer Andrew Kent, thanks to a pre-Fast Times Cameron Crowe. At the time, Mr. Crowe was the wiz-kid who left school and started touring with bands for Rolling Stone—at age 16, the same era he’d go on to portray in his autobiopic, Almost Famous. Luckily for Kent, this meant that Crowe missed Drivers Ed.

“I was very lucky to meet David Bowie when I did.  I met him almost nine months before I ended up working with him,” Kent smiles.  “Cameron Crowe didn’t drive so I had to go back to the studio and pick them up at two in the morning.  We went back to Bowie’s place in Stone Canyon Bel Air. And the rest is history.”

During a grueling tour schedule, Bowie and Kent made time for cultural stops along the way. Just as you would imagine of the genteel and intellectual Bowie. While the rest of the world tried to figure out just what to call Bowie, Kent instead found it easier just to talk with him.

Kent’s portraits have the ease of intimacy, while still capturing some of the most striking images of Bowie there have ever been. From crossing the Atlantic, to getting lost behind the Iron Curtain in the 70’s, to private moments backstage when Bowie the superstar and perfectionist would apply his own makeup. David Bowie aboard the Italian ship Michaelangelo in New York Harbor.  With the rest of his tour flying out days later, Bowie decided to take a slow boat across the Atlantic with only his assistant, Coco.

ALL PHOTOS ARE AVAILABLE FOR SALE AT: RockPaperPhoto.com.

David Bowie aboard the Italian ship Michaelangelo in New York Harbor.  With the rest of his tour flying out days later, Bowie decided to take a slow boat across the Atlantic with only his assistant, Coco.

On the last day of the  European tour in summer of 1976, Bowie put on his own make up in Paris’ L’Hotel. Bowie toured that year in support of Station to Station, his record in the persona of “The Thin White Duke.” Of all the personal and revealing photographs of the young singer, this is the most candid and striking.

2. David Bowie smoking a cigar at a table at the Metropole Hotel in Moscow. USSR, Silver Gelatin, B&W, Vertical.

David Bowie smokes a cigar after having caviar of Moscow’s Metropole Hotel for his seven-hour visit in summer 1976.  Due to a timetable error, the Scandinavian press camped out a day too early at his next stop in Helsinki to meet Bowie’s train.  This innocent little detour lead to a panic in Scandinavia as word spread that Bowie had gone missing in Russia.

On the day Bowie arrived in Helsinki the headlines in all the Scandinavian press screamed, “BOWIE LOST IN RUSSIA.”  Luckily that was not the case.

During a two week hiatus in the tour, Bowie invited photographer Andrew Kent to join him, Iggy Pop, and acting manager Pat Gibbons on a trip to Moscow from Zurich.  Normally driver Tony Masia would bring Bowie wherever he needed in the black limo, but Masia was sent on ahead to meet them in Helsinki.

After only seven hours in Moscow the group headed back to catch up with the tour in Helsinki.  No one knows how this mishap occurred, but in Helsinki the train schedule was wrong.  It took an entire extra day for Bowie and the group to make it to Helsinki.  Meanwhile tour publicist Barbara le Witt had corralled the Scandinavian press to meet their train.  And Bowie wasn’t there.

The next day they arrived at the appointed time and Bowie had a smoke outside of his limousine.  The press (seen in the background of the hotel lobby) was relieved to discover that Bowie had been found.

After touring relentlessly for years, Bowie never managed to come home to play in England. This promotional shot from behind in a vest made the cover of New Music Express in 1976. The heading read “BOWIE’S BACK.”

David Bowie puts on make up in Paris at L’Hotel.  This rare shot from the Thin White Duke era of Bowie alone and peaceful.

It’s images like this, rather than the chaos, that will help Bowie fans sleep at night this week. For a man who tore up gender and identity and the music business itself, he also filled so many misfit creatures with a sense of peace and belonging.

ALL PHOTOS ARE AVAILABLE FOR SALE AT: www.RockPaperPhoto.com. 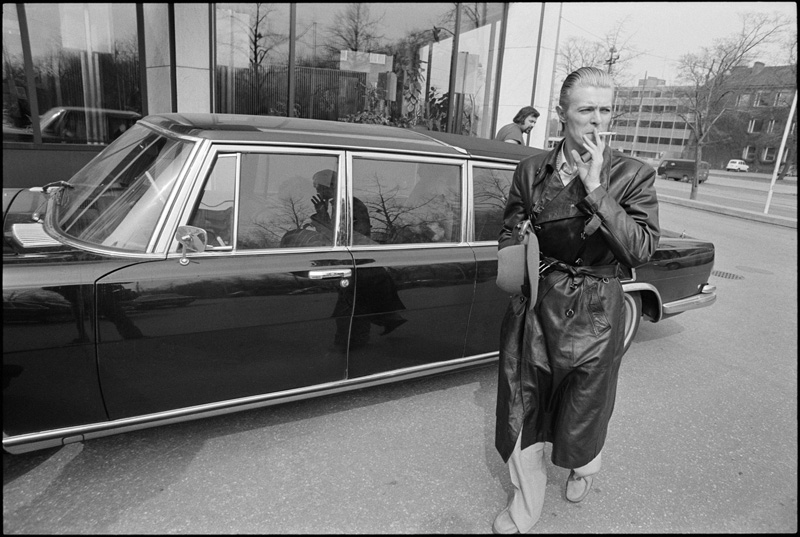