The proverbial ca-ca is damn near reaching the fan for the Gallagher’s this week. I mean, their fan is already covered in the stuff, but it seems like more is always on the way.

Carl’s business of selling guns is THRIVING. He buys the family food which I still love. This kid has grown up in deep poverty and has money (albeit, dirty money) for the first time and his main instinct is to provide for the family. We don’t see him blowing it on random stuff; instead he buys the orange juice *with* the pulp. It’s really sweet. I love it so much. It seems like it’s all about to come crashing down though when he is pulled into the Principal’s office but PSYCH. Now the principal wants one to protect his school from potential shootings. And he’s not the only one: teacher after teacher hits Carl up for weapons. But, let’s be honest, can you really blame them?

Carl is still relentlessly pursuing Dominique and even enlists the principal’s help to convince her that he’s actually black. “A fine, upstanding African American citizen of our proud school” he calls Carl. Sure. Carl even goes so far as to take Liam to Dom’s house to convince her he’s black. He meets her dad, drops an N bomb, and is given 10 seconds to vacate their property. I mean, how well did he really think that was gonna go? After a student drops a tray in the cafeteria, all of the teachers and a few of the students pull out their guns in panic, exposing how deep Carl’s operation has gone…uh-oh.

Fiona is still pregnant and deep into the throes of morning sickness. She pukes out the window due to the bathroom being occupied and Frank dubs it “Gallagher rain”. I laughed out loud. I love that despite being the absolute shittiest father in the world, Frank has so much pride in his family and the Gallagher name. Frank moves the Mendoza family into the Gallagher backyard after the Mendoza’s were evicted. Uh-oh. The gentrification is creeping closer and closer.

Fiona confesses her pregnancy to Debs and Debs, of course, freaks out. She wants their kids to be sister/cousins and grow up together. Debs thinks this means Fiona has changed her views but nope! Fiona wants the two of them to get abortions together! Sister abortions! Debs calls Fiona a slut, disgusting, and a horrible human being all in one breath and then accuses Fiona of ghosting her husband (separated), Gus. This brings to light the very real fact that Fiona doesn’t know who the father of her child is. Could be Gus…could be Sean…could be Jimmy…yikes.

Fiona has a meltdown with V and confesses that even she doesn’t know who the father is. She realizes she needs to see Gus to give back the ring and get closure. Fiona tells Sean she’s going to see Gus and to Sean’s credit, he takes it pretty well. I like the new honesty that the two of them have. A wild change of pace from any of her previous men.

Fiona and V head to the bar to see Gus’s band play. He seems sweet to her at first and tells her he wrote a song for her. You begin to wonder if they’re headed for a reconcilliation when PSYCH AGAIN. The song is called “The F Word” and it’s clear from the beginning that this is not a love song. “F is Fiona. I felt like I could fly. But then fuckin’ Fiona was fuckin’ everyone. Fuck you, Fiona. Cause now I’m fuckin’ done.” Here’s the thing, the song is pretty catchy so treat yourself to a full length music video featuring the vocally and physically beautiful, Steve Kazee.

Through tears, Fiona tells Sean what happened with Gus and he tells her that he didn’t do any drugs today. A real win/lose do for Fean? Siona? Sea-iona? Sean is really sweet about the Gus thing and even requests a few bars of “The F Word”.

Debs enlists Frank’s help in convincing Fiona to keep her baby. Frank won’t have it and decides to throw an abortion intervention. An interbortion, he decides. Frank stages his own “take your daughter to work day” and teaches Deb how to apply for welfare now that she’s going to have a dependent.

The whole family (minus Lip and Ian, plus V and Kevin)  meet in the living room for the interbortion (patent pending). V goes to back Fiona and Kev is there because “he paralyzed a guy”. The cast is so strong as an ensemble that it’s truly a treat when they all get together. Kevin adds color commentary to the interbortion that make it one of the funniest scenes this season. Debs tries to guilt trip Fiona but to no avail.

A teary Debs begs Fiona for her support for the pregnancy. Fiona tries one last time to convince Debs to wait and have babies together in 10 years. Debs confesses that she got pregnant on purpose and Fiona finally reaches her breaking point. “Frank is the only person who thinks this pregnancy is a good idea. You have Frank on your side. And that should bother you. You should be crying. And I want you to really get this too: if you have this baby, I will not support you. Not physically, not emotionally. I will not change a fucking diaper. I will not be woken up in the middle of the night because it has fever or crupe or fucking colic. Because you will not be living under my roof. You are on your own if you do this.” DAMN.
It seems cold, but again, you cannot blame Fiona. The mere fact that Debbie got pregnant at FIFTEEN, ON PURPOSE just goes to show that she is nowhere near ready for this baby. Fiona has exhausted all of her angles, so it’s time she starts dropping bombs.

Fiona confesses the pregnancy to Sean who takes it well. He doesn’t question her and instead, offers her support and kindness. Granted, Fiona tells him he’s not really allowed an opinion or a vote since she’s not even sure who’s baby it is.

Yanis is alive but definitely not kicking. V and Kevin visit him in the hospital and find out he’s paralyzed. Kevin is overcome with guilt and almost spills the beans about cutting the brake line. Yanis refuses rehab and comes home that day V is insistent that Kevin stay silent and instead lets Yanis believe that the Lesbian Lisas cut the line. By the end of the episode, Kevin had admitted to paralyzing Yanis to: Sean, Fiona, The Mendoza family, and the Gallagher family.

The Lesbian Lisas offer to help clean up Yanis’ yard. Kevin advises against it. They should have listened to him. While Kevin is driving Yanis home, Yanis sees the LLs in his yard and tries to run them over but taking the wheel of Kev’s truck…Carrie Underwood style. Kevin is Carrie and Yanis is Jesus and I’m over this storyline. V tells Yanis that the Lisas were out of town the day of the accident. V tries to convince Kevin that he’s a hero for paralyzing Yanis and honestly, I’m fine with that.

After losing his job at the diner, Ian gets a job at Lip’s school as a janitor. At first he seems better than usual. It’s nice to see he and Lip spending time together again. Seeing Lip thrive at school is hard for Ian though. He realizes everything he gave up by running away and joining the army. In a last ditch effort to get his life in order, he asks a drunken Lip if he can stay with him in the dorm for a while. Lip’s not into it. He’s finally on his own and he feels like he’s earned his privacy. Which, let’s be honest, he has! Lip has worked just as hard as Fiona at keeping the family together and he finally has a shot at making something of himself. Ian doesn’t take kindly to this and the two end up brawling in the dorm room hallway. Ah, brothers!

Fiona and Sean return back to the Gallagher’s house only to be greeted by an eviction notice, just like the one the Mendoza’s received the week before. BIGGEST UH-OH yet. The Gallagher home has been such a staple the last six years, it’s damn near impossible to imagine them anywhere else.

After Lip calls him a hero to his roommate, Ian saves a woman from a burning car and then is saved himself by a very handsome fireman. Aw, see! There ya go, Ian! There are always cute boys to live for! 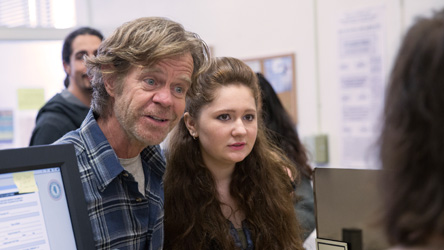