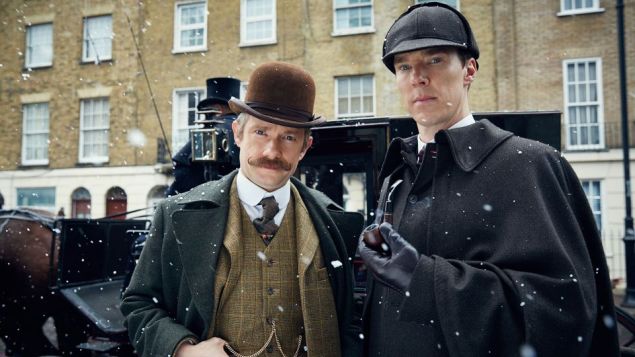 Welcome to Victorian England. Rupert Graves’ Lestrade is rocking the facial hair equivalent of two squirrel pelts stapled to his cheeks. Anglo-Afghan War vet John Watson acts out on his deep-rooted insecurities by being aggressively cruel to women and/or the help. He’s increasingly uncomfortable with the growing numbers of socialists, suffragettes,anarchists, and the French. To his credit, however, he does pull off Rich Uncle Pennybags’ (The Monopoly Guy. Yeah, he has a name other than “The Monopoly Guy”) mustache, so he’s got that going for him. Sherlock’s brother Mycroft is stuffed deep into a Jabba the Hutt-sized fat suit. Sherlock’s nemesis Moriarty is maybe not dead? As for Holmes himself, he still takes every opportunity to let everyone know that he fancies himself the smartest motherfucker in the room. Naturally, he’s still a massive pain in the ass. Still, time travel seems to have knocked him a few rungs down the high-functioning sociopath ladder in that he’s still high-functioning, but less of a sociopath.  Watson, on the other hand, is still his beleaguered straight man. Aesthetically, it’s worth noting that Victorian Sherlock tamed his unruly curls into a gelled helmet of respectability.

Of course, this jaunt to the past is the product of Sherlock’s coke-addled imagination. The constricting pupil shot in the beginning of the episode suggests as much. Still, it’s a nice bit of fan service to ultimately find an excuse to outfit Sherlock in his tweed cape and houndstooth cap even if the scenario only exists in Holmes’ gacked out memory palace. In actuality, Sherlock is still on the plane we saw depart two years ago in “His Last Vow.” However, the increasingly pale and cracked out detective is lost in his own head, consumed in a gritty Christopher Nolan-style first wave feminist fantasy where Emelia “The Abominable Bride” Ricoletti is a zombie serial killer targeting men. For all intents and purposes, Ricoletti offed herself via a gun in the mouth only to rise from the dead in full bridal regalia and take out her husband. The actual explanation for how Ricoletti can kill from beyond the grave is a bit underwhelming and involves some corpse-switcheroos and figurative smoke and mirrors combined with some literal mirrors. Still, points to the Abominable Bride for looking like she’s about to go on tour with Rasputina.

It turns out that the Abominable Bride was a bit of controlled terror conjured up by an underground cabal of suffragettes donning what looks like Grand Wizard hoods. The grand reveal was put into place when Watson and Holmes were lured to a gathering under the guise that Mary, Watson’s wife, needed saving. As if! At this point, we all know that if it ever came to blows between Mary and any dude on this show, the smart money’s on the blonde.

It turns out that the hooded figures were waging a decisive war on the patriarchy. This reveal was telegraphed along the way when characters like Mrs. Hudson went meta and complained of how they her existence was barely a footnote in the stories Watson published in The Strand.

“I’m your landlady,” said Mrs. Hudson. “Not a plot device.” Her protest is a domestic step away from Fury Road’s “We are not things” rallying cry. Molly Hooper takes it a step further and announces her autopsy findings in full drag, complete with a mustache that rivals Watson’s.

The gender commentary isn’t subtle, mind you. Even the usually likable Watson is played up as an aggressive misogynist in his Victorian incarnation. Still, while Sherlock is usually infuriatingly perceptive in all other arenas, it took an elaborate ghost bride ruse and a murderous underground lair of women dressed like Heaven’s Gate members to get woke.

“A league of furies awakened, the women I, we, have lied to, betrayed,” says Holmes in his Matt McGorry-style awakening.  “The women we have ignored and disparaged. Once the idea exists, it cannot be killed.”

The idea of equality between the sexes can’t be killed. Unlike the dudes mowed down by the cabal’s ghost bride. They can definitely be killed. And in a hedge maze, no less! At this point, we can all agree that hedge mazes exist purely exist as venues for murder and ghost shenanigans.

Feminist epiphany aside, the Abominable Bride is an old cold case that got lodged in his brain before he retreated inside himself during an ill-advised increase in his drug use. The themes of the bride’s death and resurrection are the subconscious manifestation of Sherlock’s anxiety over the his nemesis Moriarty taunting him from beyond the grave. In some some overwrought showdowns, Moriarty does indeed confirm that he is dead in the strictest sense of the word. Sherlock even says so himself. Moriarty put a gun in his mouth and blew his brains out. Professor Logic Holmes himself had to concede that people don’t survive. Still, Holmes also has to concede that Moriarty found a way to continually haunt Sherlock. We all know that Moriarty is a resourceful fucker and probably had a contingency plan in place for wreaking havoc should he end up biting it.

Sherlock breaks the conundrum down succinctly with the delineation that Moriarty may be dead, but that doesn’t mean he’s not “back.”

“More importantly,” Sherlock says, “I know exactly what he’s going to do next.”

Right, because camping out deep in Sherlock’s psyche and suggestively licking a gun wasn’t enough. That being said, this is clearly the setup for the fourth season set expected at an undetermined point in 2017. Hopefully, all the Holmes/Watson banter was enough to keep fans satisfied during the interminable wait. It’s probably a good idea to keep Mycroft’s notebook marked “Redbeard” fresh in our minds as well, along with the fact that he held on to the scrap of paper containing Sherlock’s drug cocktail. Sure, Sherlock thinks of himself as the smartest person in the room, but he’s got competition from Mycroft. And Mary.

If anything, “The Abominable Bride” was a nice piece of fan fiction that used the “It was all a dream” convention to break from the canon a bit. There was also a bit of freedom in the unreliable narrator lense of Sherlock’s drug induced snooze, especially the uncomfortable competition where Sherlock dared Mycroft to eat himself into an early grave. Mark Gatiss’s portrayal is significantly slimmer than the pudgy character described in Arthur Conan Doyle’s source material. And although we’re seeing this dream incarnation through the prism of Sherlock’s sibling rivalry, the gluttonous Roman Emperor posturing and the pronounced morbid obesity do come off as a bit hateful and fatphobic.

Anyway, now that Sherlock has sobered up from his time-travelling nightmare, Watson and Mycroft now have another good story to tell at their next Al-Anon meeting. In fact, I’d love to see deleted scenes that are just Mycroft and Watson bitching about Sherlock in Al-Alon meetings. Make it happen, Moffat. 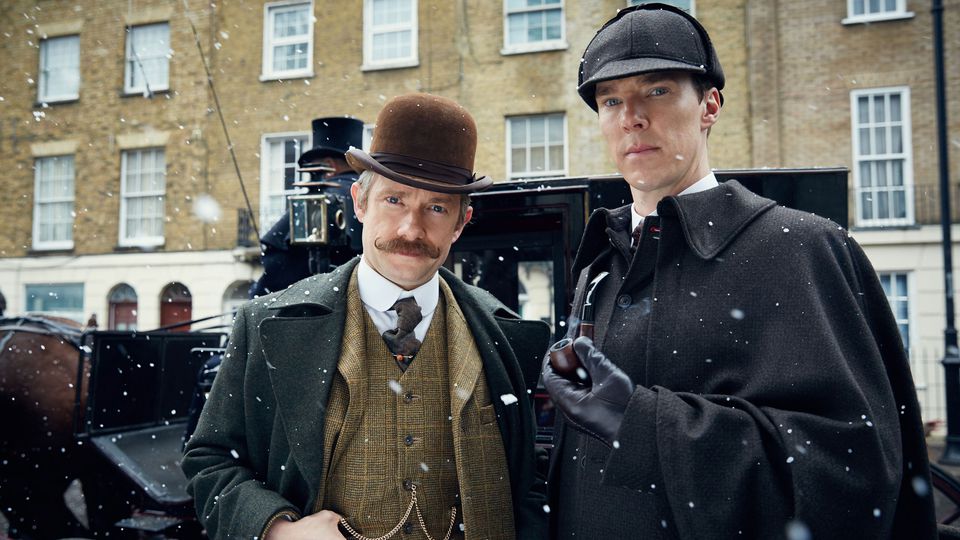