According to a new NBC/Wall Street Journal poll Sen. Bernie Sanders has pulled to within three points of Hillary Clinton in Iowa, with Ms. Clinton winning 48 percent and Mr. Sanders winning 45 percent. The poll shows Mr. Sanders leading Ms. Clinton in New Hampshire by 50 percent to 46 percent, while a number of other polls show the Sanders lead in New Hampshire even higher.

Even more shocking to the talking heads of the mainstream media, whose blackout of Mr. Sanders is finally beginning to end over their objection and against their will, are these two points:

Mainstream media and insider pundit classes spend far too much time at cocktail parties and power lunches, quoting each other’s pearls of wisdom that are nothing more than the petty cash of low-end politics that insiders persuade other insiders to believe.

Second, there is now a very real possibility that Mr. Sanders could win both the Iowa caucus and the New Hampshire primary in which case, as I wrote recently, all hell would break loose in the Democratic Party and throughout the mainstream media.

I write today to confront what I believe is the Big Lie of the mainstream media and the insider pundit classes, who spend far too much time attending cocktail parties and power lunches and quoting each other’s pearls of wisdom that are nothing more than the petty cash of low end politics that insiders persuade other insiders to believe, and far too little time talking with the real Americans who know far more than they do about what is happening in the real lives of the real people whose votes will determine the future of the nation.

The Big Lie is this: that Mr. Trump has somehow touched some magical chord about the will of the nation. It may or may not prove to be true that Mr. Trump has tapped a magical chord that is deep in the soul of a Republican Party that will choose its nominee to be commander in chief based on a campaign of personal attacks and negativity. I am far from convinced this is true—I suspect a different GOP candidate will ultimately receive the nomination—but it is an arguable proposition whose truth Republican voters will determine in voting that will shortly begin.

Imagine how well Mr. Sanders would perform in the polls when the corporate-owned mainstream media blackout ends, which has already begun to happen, and which will be put into a grave of media malpractice once and for all.

What constitutes the Big Lie of 2016 is that Mr. Trump’s appeal has tapped a chord that reaches the nation as a whole that will lead him to the presidency. The overwhelming majority of polling data disproves this, showing Mr. Trump’s negative ratings at stratospheric levels and the probability of his winning a general election at levels so low they mock the mainstream media’s virtual subservience to his candidacy and shameless megaphoning of his message.

Even more important for our purposes today, the best anti-dote to the Big Lie is the Big Truth, and the Big Truth of the 2016 campaign is this:

There is a widespread national rebellion against politics as usual, and against economics as usual, and against a politics and media that pay homage to political games that are fixed and an economic system that is rigged—and the true and faithful voice for this discontent across the nation as a whole, whatever the factions of the GOP may wrongly believe and whatever the factotums of the mainstream media may falsely report—is Mr. Sanders, and not Mr. Trump.

And how we have a poll from The Wall Street Journal, a bastion of American capitalism, and NBC, part of a Comcast-owned conglomerate that leads the media league in promoting the fantasy that suggests a national surge for Mr. Trump—and this poll shows Mr. Sanders pulverizing and annihilating Mr. Trump among general election voters in Iowa by an epic landslide margin of 13 points, and pulverizing and annihilating Mr. Trump in New Hampshire by an even greater epic landslide margin of 19 points!!!

Imagine how well Mr. Sanders would perform in the polls when the corporate-owned mainstream media blackout of him ends, which has already begun to happen, and which will be put into a grave of media malpractice once and for all if Mr. Sanders wins both the Iowa caucus and the New Hampshire primary which all polling, from all sources, shows is a very realistic and plausible scenario.

The political insiders may tremble at the thought of the political revolution that Mr. Sanders promises to bring—but they cannot stop his numbers of rising in Iowa and New Hampshire.

The corporate lobbyists and super PACS and special interests can pour millions of dollars into campaign coffers of candidates who dread and fear the revolution that Mr. Sanders promises to bring—but they cannot stop the small donors who support the Sanders campaign from sending huge numbers of small donations of their hard earned money in an unjust economy to the Sanders campaign and giving Mr. Sanders a record-shattering small donor triumph unprecedented in the history of American politics that every Democrat, how matter which candidate they support, should respect and admire as a wonderful and beautiful and magnificent statement about American democracy, as I do!

I do not expect many in the mainstream political media to often quote the Sanders domination of Trump in the poll I cite here above, as they should, as the white-hot voting in Iowa and New Hampshire voting comes close.

But to paraphrase the famous speech of Patrick Henry in 1775, I know not what course the campaign might take but those who care about the future of America might look up the famous picture of Harry Truman in November 1948 holding up a newspaper as the voting ended, with a bannered headline that read: “Dewey defeats Truman.”

Mr. Truman gave ’em hell and the experts said he couldn’t win either, and the rest is history. 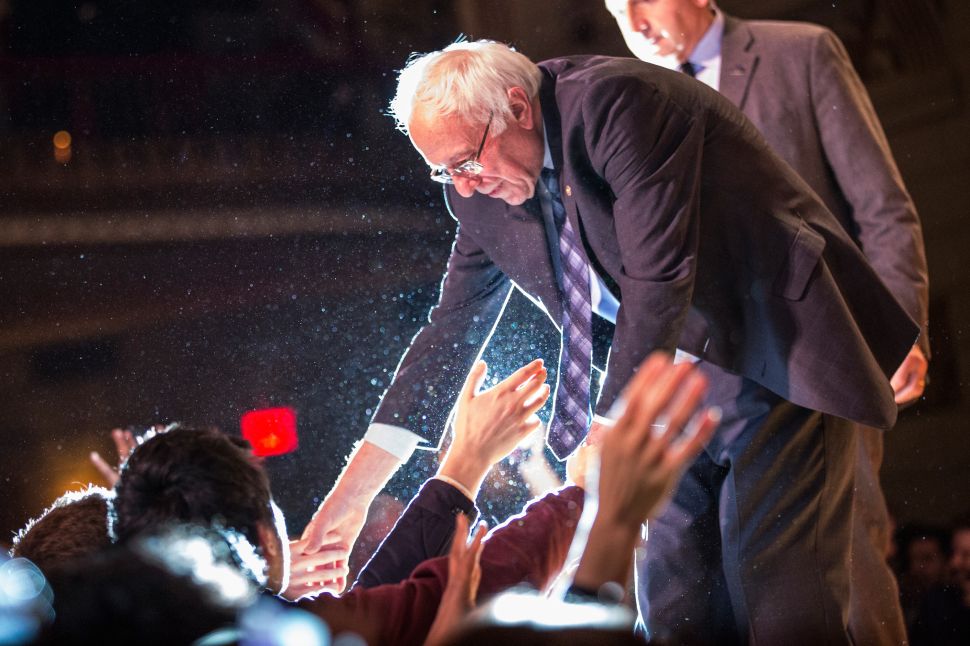