Lesley Vogel is paying way too much for her Manhattan pied-à-terre. And she couldn’t be happier about it.

Ms. Vogel and her husband, who keep their main residence in Saratoga Springs, N.Y., knew they wanted a part-time place in New York. She’s originally from Queens. They lived together for years in Park Slope. Their children have all moved to the city. But when they began looking for an apartment a few years ago, they found they were having commitment issues.

Though familiar with New York, the couple had never lived in Manhattan, and so “We didn’t know what to expect as far as living here,” Ms. Vogel told the Observer. “We knew we wanted certain things, but we didn’t want to commit to anything.”

That being the case, they decided that rather than plunk down a down payment, they would rent for a bit while sorting out just what kind of apartment they were after and where they wanted to be.

It’s a pragmatic approach that’s yielded at least one impractical benefit—because the Vogels weren’t planning to rent for the duration, they didn’t have to worry so much about financial sustainability. So they blew it out with a spacious one-bedroom directly on Central Park West. Call it the YOLO approach to real estate.

“We saw it as a short-term proposition and so we decided just to treat ourselves and get a wonderful apartment,” Ms. Vogel said. “We’re on the 12th floor. We have a terrace. We have complete views of the whole park.”

“We could never afford to buy this apartment, but we could afford to rent it for a couple of years and treat it as a vacation in the city,” she said.

Now the vacation is coming to an end. The couple’s lease is up in June, and, Ms. Vogel said, they aren’t planning to renew. They aren’t necessarily planning to buy, either, though.

“I won’t continue to spend what I’m spending, but if the right rental comes along, I might consider it,” she said. “I’ve discovered that buying real estate in the New York City market is pretty complicated. There are a lot of things that have to be considered, which is why renting is sometimes a much more appealing proposition.”

Conventional real estate wisdom would suggest that, if you have the cash, you’re better off buying your place—in the long-term, anyway. Nonetheless, even among those with the necessary means, a certain segment still prefers to rent—and the pied-à-terre market is no different.

In fact, said Jeff Schleider, founder and managing director of Miron Properties’ Manhattan office, prospective pied-à-terre occupants have been trending more toward rentals in recent years due to the city’s white-hot housing market.

On the one hand, “Because pricing is just exponentially higher than it has been, some people are simply priced out of the [sales] market,” he said. At the same time, he added, other clients think prices might be approaching their peak and are worried about buying at the top.

The market for pied-à-terre rentals has traditionally been weighted toward out-of-town executives whose companies lease a place for them to stay when they are in the city on business, Mr. Schleider said.

“There is still a consistent flow of that,” he said. “What is unique now is that a lot of people who might have purchased otherwise are now choosing to rent.”

‘Because pricing is just exponentially higher than it has been, some people are simply priced out of the [sales] market. At the same time, he added, other clients think prices might be approaching their peak and are worried about buying at the top.’—Jeff Schleider of Miron Properties

“I think in today’s market where you have these super-tight vacancies and the resale market has a lot of velocity, some people are saying, ‘O.K., we’re not going to buy yet. We feel that the market may have a little bit of a correction with interest rates rising, so we’re going to hold off a bit and see what happens,’ ” he said.

He cited as a recent example a couple he worked with who decided to rent a pied-à-terre on the Upper East Side after backing off their initial plans to buy.

“They felt the market was at a very expensive point, and they were a little uncertain whether they were in a position where it would be smart to buy,” he said.

“I lived through the early ’90s when the New York market tanked and people were stuck trying to unload apartments,” Ms. Vogel said. “I have two sets of friends who sold apartments on the Upper West Side, two- or three-bedroom apartments, for about $300,000 that today would probably go for $3 million.”

Mr. Bradsher and his wife rent a one-bedroom at One Sixty Madison to use when visiting New York. He said he is open to buying a place down the line but put the odds of doing that at “50-50.”

“We actually had that conversation, and looking at the costs and return on investment for the type of place we would be looking to get, we would have to go even further [upmarket] and get a much bigger place for us to get a good return on investment,” Mr. Bradsher told the Observer. “Because the turnover in the studio, the one-bedroom market is very different than it is for a two-, three-bedroom that could attract a different type of clientele.”

Douglas Elliman’s Steve Grey recently worked with a couple who moved from one rented UES pied-à-terre to another after failing to find any suitable properties for sale before their initial lease ended.

“They had a budget around $1 million to $1.5 million, and they weren’t seeing anything that they liked in that price range and they had a time frame because their lease was ending,” he said.

“That was the idea from the beginning, to reach out to an audience that wanted a pied-à-terre but wanted to rent,” Mr. Rubinstein said. He added that the building was designed with perks like washer-dryers and high-end finishes in order to better attract such a crowd.

The level of design is something “you would normally not expect to find in a rental building,” he said. “And the appeal is that someone who wants to have a part-time residence in New York City [but] maybe isn’t in a position to buy a condo right now can rent this instead and still have that same kind of feeling.”

“We’ve noticed over the years, especially with rising condo prices, that people come here looking for a pied-à-terre and then they leave without buying something,” Mr. Rubinstein said. “It turns out to be a little more expensive than they anticipate, and for them a rental would be a very good solution, but it is hard to find the kind of rental that is comfortable enough for them to be happy.”

Of course, with enough money you can find pretty much anything you want. Bond New York’s Tina Borges-Druth, who helped the Vogels with their current CPW abode, recalled working with another client some years ago who was similarly looking to rent a second place.

“She could afford it, so it was fine,” she added.

And Corcoran broker Dennis R. Hughes this year helped a European sports star find a suitable Manhattan pied-à-terre rental while he scouted out his options in the sales market. The athlete is spending somewhere north of $55,000 a month, but, Mr. Hughes noted, a person in his position doesn’t want (or need) to make a rash decision.

“When you are coming to a country where you haven’t lived before and where you don’t know the market that well, and when you are in a category of multiple millions of dollars in terms of a purchase price, I think it makes sense to explore the city [before buying],” he said.

Mr. Hughes said he also this year found a $45,000-a-month pied-à-terre for a Midwest-based executive in a similar situation.

Sounds nice. But all the same, one should keep in mind that even a dream apartment can go only so far in protecting you against the city’s multitude of small indignities. For instance, when reached by the Observer, Ms. Vogel was sitting in her car waiting out that morning’s alternate-side-of-the-street changeover. 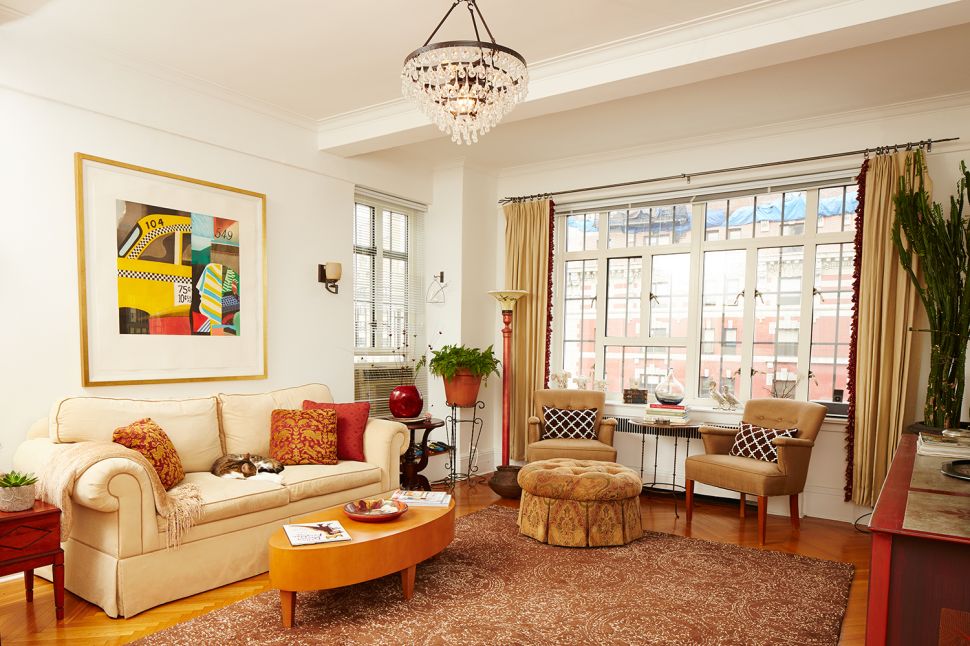