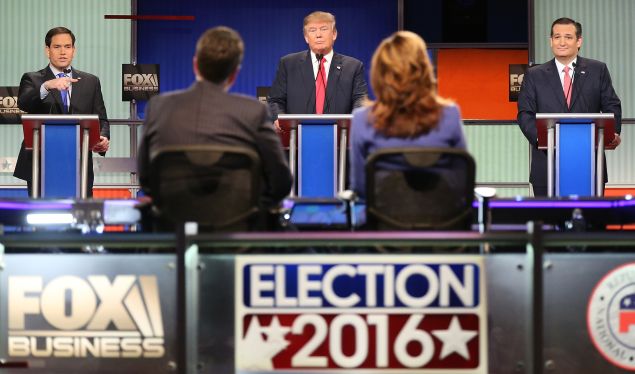 Six debates down, six to go! And, thanks to Fox Business’ tougher criteria, there were just seven candidates in the main debate, instead of the previous nine. That made for a much better viewing, as we only had to watch about half a dozen people vie for attention.

It also means I have to find positives and negatives for fewer people. So without further ado, here is that analysis.

Where he floundered: His attacks on Texas Sen. Ted Cruz’s eligibility are tiresome. This is a settled argument. Mr. Cruz is eligible for president and the fact that the back and forth between Mr. Trump and the Texas senator dragged on for five minutes was embarrassing.

Where he excelled: When Mr. Cruz tried to claim that conservatives don’t come from Manhattan, Trump nailed his response by saying William F. Buckley—conservative hero—was born in Manhattan. He also reminded Mr. Cruz that “New York values” are the same values that rebuilt the World Trade Center after the worst terrorist attack in American history.

Where he floundered: Mr. Cruz floundered where Mr. Trump excelled: in the discussion on “New York values.” Sure, a Republican is highly unlikely to get the electoral votes of New York, but denigrating the men and women who live there will do the Republican Party no favors.

Where he excelled: His insistence that no American soldier would have to get down on his knees and apologize to a dangerous nation will certainly play well with conservatives.

He was also prepared to answer a question about taking a loan from failing to disclose a loan from Wall Street during his 2012 senate campaign, and he diffused the attack masterfully.

“We took a loan against our assets to invest it in that campaign to defend ourselves against those attacks. And the entire New York Times attack – is that I disclosed that loan on one filing with the United States Senate, that was a public filing,” Mr. Cruz said. “But it was not on a second filing with FDIC and yes, I made a paperwork error disclosing it on one piece of paper instead of the other. But if that’s the best the New York Times has got, they better go back to the well.”

Where he floundered: He missed an opportunity when asked about whether Mr. Obama was really attempting to take away Americans’ guns. Rubio should have brought up Mr. Obama’s mention of Australia’s buyback policy. That was not a voluntary policy, it was mandatory. So when Mr. Obama brings up that policy, he’s advocating confiscation.

Where he excelled: His explanation for how former Secretary of State Hillary Clinton is disqualified from becoming president was a strong statement.

“Someone who cannot handle intelligence information appropriately cannot be commander in chief and someone who lies to the families of those four victims in Benghazi can never be president of the United States. Ever,” Rubio said.

He also, thankfully, stepped in to stop the minutes long spat between Mr. Trump and Mr. Cruz over the latter’s eligibility to be president.

Where he floundered: He was too prepared with a comment about not being called on. The problem is that not everyone had even been called on once at that point, not even Mr. Trump. If the other candidates had been asked multiple questions before Mr. Carson, his critique would make sense. But at this point, with his failing campaign, being sixth in line for a question is not outrageous.

Where he excelled: While I personally didn’t think he gave a strong performance, his comments about religion may help reinvigorate his flailing campaign by reminding people what they liked about him in the first place: His social conservatism.

“You know, you go to the internet, you start reading an article and you go to the comments section—you cannot go five comments down before people are calling each all manner of names. Where did that spirit come from in America? It did not come from our Judeo-Christian roots, I can tell you that,” Carson said. “And wherever it came from we need to start once again recognizing that there is such a thing as right and wrong. And let’s not let the secular progressives drive that out of us.”

Where he floundered: His implication that we’re somehow worse now than when President Obama took office—when the economy was in freefall—doesn’t do him any favors.

“Well first of all, the idea that somehow we’re better off today than the day that Barack Obama was inaugurated president of the United States is totally an alternative universe,” Mr. Bush said. “The simple fact is that the world has been torn asunder.”

The economy might not be where millions of Americans want it to be, but I certainly is not worse than in the midst of the recession. And even though the world is a very dangerous place (the Islamic State is not “contained,” as Mr. Obama has claimed), it still doesn’t make the U.S. worse off, over all, now than when Mr. Obama took office. I’m not saying Mr. Obama is to thank, most of the resurgence of America was due to circumstances out of the president’s hands, but I don’t believe the country is worse now than during the recession.

Where he excelled: His answer on gun control was his best of the night. Bringing up the fact that existing laws were broken for the South Carolina shooter to get a gun should not result in additional laws against lawful gun owners, and pointing out that mental health needs to be addressed.

“We don’t need to add new rules, we need to make sure the FBI does its job. Because that person should not have gotten a gun, should not—would not have passed a background check,” Mr. Bush said. “The first impulse of Barack Obama and Hillary Clinton is to take rights away from law-abiding citizens.”

He also had a reasonable response to Mr. Trump’s plan to ban Muslims from entering the country by mentioning that the U.S. won’t be able to build a coalition of Muslim nations to fight the Islamic State if you ban them from the country.

“I hope you reconsider this, because this policy is a policy that makes it impossible to build the coalition necessary to take out ISIS,” Mr. Bush said to Mr. Trump. The Kurds are our strongest allies. They’re Muslim. You’re not going to even allow them to come to our country?”

Where he floundered: When he spoke, he gave some great answers, but he didn’t try to insert himself into other discussions as other candidates did. This meant he had less speaking time than others, and he really needed to keep the attention on him during this debate.

Where he excelled: His rebuke of Mr. Obama’s executive actions was one of the best answers he’s given in any debate so far.

“The president wants to do things without working with his Congress, without working with the legislature, and without getting the consent of the American people,” Christie said. “And the fact is that that’s not a democracy. That’s a dictatorship. And we need to very, very concerned about that.”

Throughout the entire night, actually, Mr. Christie seemed to be on fire. His answers about the problems on Syria (how the country can’t be fixed while Bashir al-Assad is in power)  and his attacks on how Ms. Clinton called Assad a “reformer” were spot on.

Where he floundered: I don’t think he should still be in the race, so everything he does is floundering in my book. You could tell from the lack of applause during most of his diatribes that he is just not a compelling candidate.

Where he excelled: He didn’t. Nothing he said tonight is going to help his campaign. 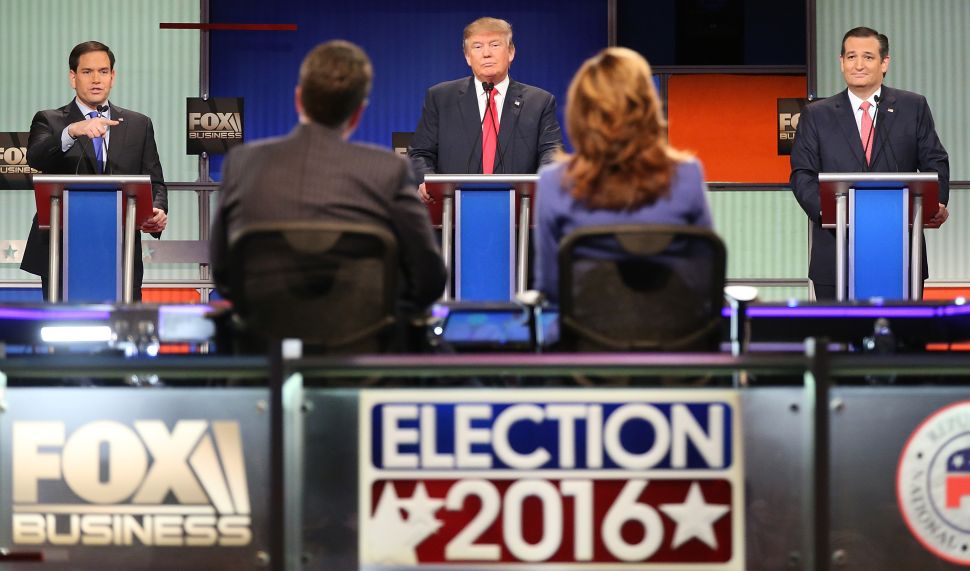