With Hillary Clinton encountering very choppy campaign weather in national polls and trying to gut out a must-win in Iowa in anticipation of a Bernie Sanders victory in New Hampshire, PolitickerNJ finds itself scrambling to paste together those what if scenarios as long as she remains the front-runner.

Having said that, though, it’s conceivable that either one of these two front-runners for the VP slot could surface on a Sanders short list. (That is, of course, if Sanders upsets a very wobbly looking Clinton for the Democratic presidential nomination.)

Tale of the Tape

Contribution to Society While in Washington: He took more selfies with more people in the Capitol than anyone before or since. And if Henry Clay is rolling in his grave, a nationally humbled Rand Paul can at least go back to the upper chamber after getting his butt kicked in the presidential contest knowing he has a compassionate pal on the other side of the aisle.

Job Before He Got to Washington, D.C.: Medium City Mayor (Newark).

Accomplishments: Hand over calloused hand, he built a universe of 1.6 million Twitter followers.

Achilles Heel in a Nation-sized Election: Either the Newark Watershed Conservation and Development Authority, or his perceived closeness to Republican Governor Chris Christie.

How Effective Would He Be as an Attack Dog?: In a 2012 dogfight election, Booker went on Meet the Press in support of Barack Obama and complained about how Democratic Party attack ads against the rival campaign of Republican Mitt Romney “sickened him.”

Most Memorable Line at the 2012 Democratic National Convention: “These are the dreams of our fathers and mothers … from sea to shining sea, from north to south… we are a nation with liberty and justice for all.”

Six Degrees of Separation from Julian Castro: Booker once appeared poised to be President Barack Obama’s choice to head up the Housing and Urban Development, a job later claimed by rival Castro.

Demographic Angle: Black, Booker was an early and avid backer of Obama’s 2008 prez campaign out of the inner city who presumably could effectively make a legacy case this year for the sitting president in support of Clinton in cities nationwide.

Regional Factor: Those of us with long memories still can’t shake that image of Hillary proudly sporting a Cubs baseball cap, then falling back on quotes by Washington Irving in her first U.S. Senate debate. But she is a New Yorker, after all, and Booker – notwithstanding his insistence on radiating an LA attitude – is a Jersey guy. Will Democrats really put up a ticket the GOP can twist into the ultimate embodiment of the East Coast liberal elite?

The Macho Factor: During the 2013 senate race, Booker tweeted at a self identified west coast “stripper model weirdo.”

Family Values: He is – like most American adults – unmarried. That would be a first – to our memory, at least – among VP picks. Usually the second banana on the ticket projects as an incredibly happy, stable and well adjusted head of household – like John Edwards.

Sizing Him Up as a National Brand: People in New Jersey who have listened to him for years may have grown weary of the same platitudes played and replayed with little variation at higher and higher registers, as though pitch could supplant pith. But he’s still a vibrant campaigner, with the ability to inspire young people. “Cory Booker is killer,” a young person recently told PolitickerNJ. The other thing about Booker that’s easy to forget in a dumbed down culture is that the guy is a quick study who excelled at Stanford undergrad and Yale Law School. If the downside is that his oratory often comes across as canned, and notwithstanding that aforementioned Meet the Press debacle, he doesn’t make too many mistakes.

Job Before He Got to Washington: Big City Mayor (San Antonio)

Accomplishments: As a part-time mayor of San Antonio earning $3,000 annually, he was unable to inflict the damage wrought by most full-time politicians.

Contributions to Society: None. Or anyway minimal (52.7M Twitter followers). At first blush, zero or next to nothing on the resume might be cause for alarm, but in these times when government experience is a liability, Castro could conceivably get away with – and even present as a virtue – a not ready for prime time story line.

Achilles Heel in a General Election: His public persona is so thin, does he have a heel?

How Effective Would He Be as An Attack Dog?: Bearing a vague resemble to Jack Nicholson in the first Batman movie, Castro could likely effectively deliver the line, “Ever dance with the devil in the pale moonlight?”

Most Memorable Line at the 2012 Democratic National Convention: “We’re only getting started,” the then-mayor said of his work in San Antonio, two short years before going to Washington to claim the job of HUD secretary.

Foreign Policy Experience: Much the way Alaska is close to Russia, Texas is close to Mexico.

Six Degrees of Separation from Cory Booker: Unlike Booker, who quickly lined up behind Christie on the Republican governor’s cornerstone proposals in the area of local government financial maintenance and public education overhauling, Castro swatted at a polls-weakened Christie just yesterday when he cited a poor HUD application submitted by the New Hampshire-storming guv as the reason for New Jersey’s loss of federal disaster relief.

Demographic Angle: Latinos are the largest growing population in the country, making Castro – who speaks Spanish with far less polish than the Newark North Ward-schooled Booker – a can’t miss short list prospect given a very shrunken Hispanic bench in the Democratic Party. Here he has a big edge on Booker.

Regional Factor: Again, Booker can practically stretch his arms across the Hudson River to Clinton’s front door steps, a geographic reality likely to prompt howls from Middle Americans who only want to watch TV shows featuring cool in-your-face Northeast types not have a country run by them.

The Macho Factor: He self-identifies on Twitter as a boxing fan.

Family Values: He is – unlike a majority of adult Americans – married.

Sizing Him Up as a National Brand: For a guy who once served as mayor of one of America’s hippest western cities, he comes across as wonky and dorky and hardly that cowboy hat wearing, steer-wrestling westerner a Northeast presidential candidate might need to properly balance a national ticket. Then again, he may appeal to millennials, who fear being bullied. If low excitement value is a virtue in the number two spot lest he or she detract from the luster of the prez pick, Castro could deliver the goods. 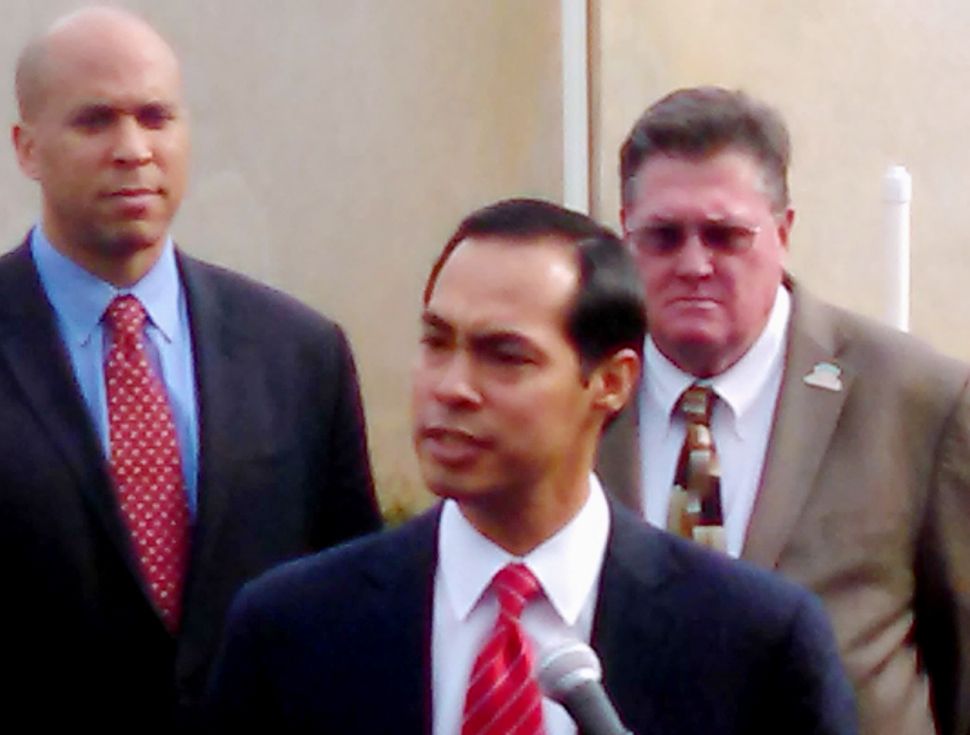