In their continued effort to move away from old school re-runs and into original programming, TV Land introduces another comedy series into their programming mix.

Teachers, set in a non-descript Midwestern elementary school, might seem like just another workplace comedy, and given the setting, one might assume that it’s a feel-good, lesson-heavy one at that. That assumption would be absolutely incorrect.

The show evolved from a webseries written and produced by an improv group known as The Katydids. The all-female ensemble is titled as such because all of the player’s names happen to be derived from Katherine. Along with O’Brien, the Katydids feature Caitlin Barlow (Ms. Cannon), Katy Colloton (Ms. Snap), Cate Freedman (Ms. Feldman), Kate Lambert (Ms. Watson), and Kathryn Renee Thomas (Mrs. Adler).

“At some point, someone told us that we all look like Midwestern elementary teachers. We agreed with that assessment, thought it was pretty funny and that there was a lot of comedy to be mined there, so we started making the webisodes. They got viral traction and TV Land saw it, bought it, and here we are,” explained O’Brien of the evolution of the series.

Jumping from quick hit web pieces to episodic television wasn’t the challenge that it might seem, says O’Brien. “It was interesting to move from doing 30 second jokes to doing a 22 minute narrative, but there’s are so many stories to tell in this arena that we were never at a loss for material.”

Much of that content came from one of the Katydids own members, Caitlyn Barlow, admits O’Brien.
“Caitlyn was actually an elementary teacher and so she brought everything she experienced doing that to the project. Plus, we all know a lot of teachers. My sister is a Special Ed teacher so I talked with her a lot and with other teachers as well. It isn’t difficult to come up with stuff in this world.“

O’Brien says the group is aware that some people may find the humor level in the series crass, but the members insist that it’s all rooted in realism. “We know that there is definitely over the top stuff here, but we had a rule in our writers’ room – if it’s real and you’ve experienced it, it’s going in, no matter how ridiculous it might seem. We’re not showing anything here that one of us hasn’t experienced so this is stuff that has really happened in our lives.”

Working as a cohesive unit has proven very effective for The Katydids, as O’Brien describes their creative process. “Well, we’ve been together for seven years so we’re sort of a well-oiled machine now. We all pitch ideas in the [writers] room and then two of us go off and complete an outline. Then, another two will write the first draft and then two others will take the draft and punch up the jokes. What we do really is we keep passing the script around so everyone gets their hands on it. Doing it this way creates one voice that’s not unique to any one of us, but that’s actually a collective of all of us. It’s a very collaborative process and we love doing it that way.”

To mimic the look of a Midwestern school, the production team located an actual abandoned elementary school just outside of Los Angeles. But, to make the school fit the bill some modifications had to be made, says O’Brien. “A lot of Los Angeles schools have outdoor walkways, not hallways, so we had to build a hallway. And, we took out palm trees and added more appropriate foliage. It’s really important to us that the school doesn’t have any particular East or West coast influences, that it really looks like something you’d find in the middle of the country.”

Harkening back to her own school days growing up in Omaha, Nebraska, O’Brien admits that she actually learned some things from her teachers that she’s brought to the series. “I had a lot of teachers that pushed me to stay true to my voice and that’s really helped me throughout my career, and certainly with this.” To this she added, with a laugh, “I’m still in touch with a lot of my teachers and I’d love to put some of them in the show. I think that would be really fun!”

Behind the scenes, O’Brien emphasizes that one thing her team is most pleased about is that the series features an almost exclusive female writers’ room. “We have our six writers, our writer’s assistant and a consulting producer that are all female. Men are represented – we have two male showrunners – but it’s really a female dominated and driven show, which is quite rare, and we’re really proud of that.”

O’Brien appeals to viewers to jump back into school with Teachers, saying, “Everyone has gone to elementary school so this is really universal and now you’ll be able to see the humor in many of the situations in ways that you couldn’t when you were in it.” To this she adds, “And, the show is also about being young and navigating your first job in a real adult workplace. So, sometimes you go to work hung-over and you learn fromm that. See? It is about learning, in a lot of different ways – with some dick jokes thrown in. Who wouldn’t want to see that?”

The Teachers premiere episode is available online and airs Wednesday, January 13th at 11pm ET. The regular timeslot for the series will be Wednesdays at 10:30pm ET, beginning January 20th. 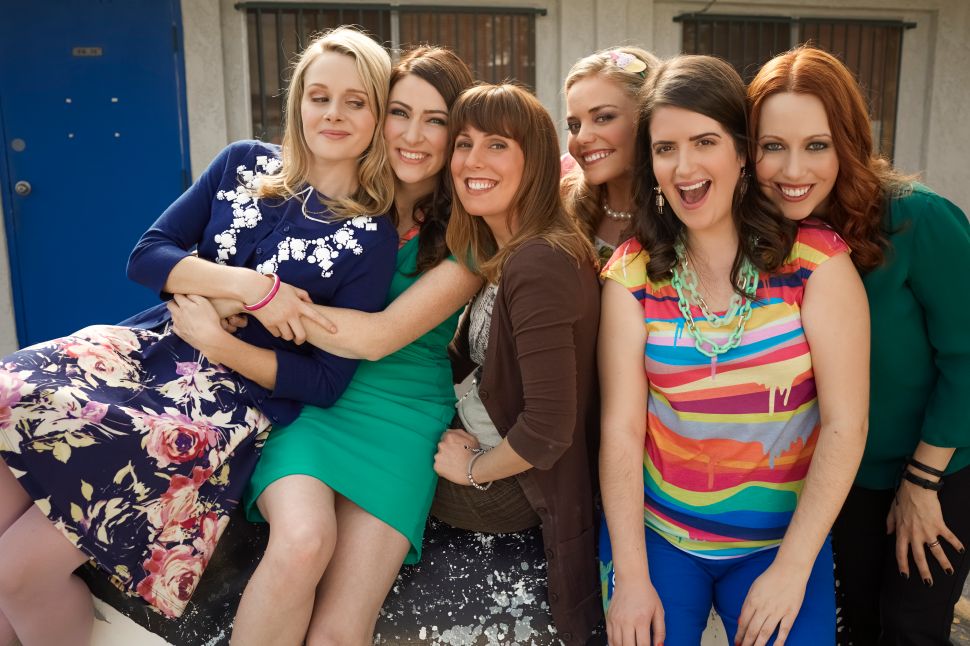