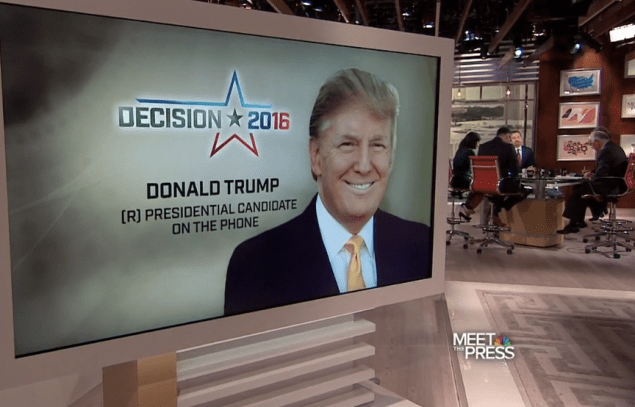 If Donald Trump anonymously spoke these words on a 911 phone call, the authorities would track him down and bring him in for at least a conversation. But the leading Republican presidential candidate spoke them Saturday night in a Las Vegas speech, so everything was fine.

His words were replayed on most of Sunday’s current-events shows.

“I could stand in the middle of Fifth Avenue and shoot somebody and I wouldn’t lose any voters, OK?” Mr. Trump said. “It’s, like, unbelievable.”

In context, Mr. Trump was describing his popularity, which, as we know, is yooj, even yooj-er than the castles he builds in Manhattan for his real estate empire. We must imagine he was speaking figuratively, of gunfire or perhaps auditioning for the role of Aaron Burr in the next casting of the musical Hamilton.

But what if Mr. Trump got serious and opened fire on one of his supporters, someone like Sarah Palin, who endorsed him last week? Then he’d lose a voter. Or what if he took aim at Texas Senator Ted Cruz, the other top contender for the nomination with the Iowa caucuses less than a week away?

Come to think of it, Mr. Trump lives in a city that is harsh on shooters. Former Mayor Michael Bloomberg—who was particularly strict about gun laws—is contemplating a third-party run if either Mr. Trump or Mr. Cruz ends up running against Democratic-Independent-Socialist Senator Bernie Sanders.

‘It’s incredibly insensitive. We’re at a moment in our nation’s history when we’re talking about how to deal with a scourge of gun violence. Donald Trump is not ready for prime time.’

Although much our great angry and demanding nation wishes to elect Mr. Trump President in November or declare him Emperor for Life right this very minute, it would be hard for Mr. Trump to rule from a penitentiary if convicted of a gun crime.

At least one fellow New York-based politician wishes Mr. Trump would re-think his choice of words.

“It’s incredibly insensitive,” New York Mayor Bill de Blasio said on ABC’s This Week. “We’re at a moment in our nation’s history when we’re talking about how to deal with a scourge of gun violence. And for someone who says he wants to be President to say that, it shows he’s just not presidential and it’s incredibly arrogant, too… Donald Trump is not ready for prime time.”

On Jake Tapper’s State of the Union on CNN, panelist Donna Brazile said of Mr. Trump’s words: “That’s his hubris.”

There’s been a lot of that kind of mean talk lately now that the race for the Republican nomination is turning into a bench-clearing brawl.

A former candidate, Senator Lindsay Graham of South Carolina, said that if the Republicans nominate either Mr. Trump or Mr. Cruz, “I think you get the same outcome, whether it’s death by being shot or poisoning. It doesn’t really matter.”

‘Think of `Reservoir Dogs,’ where everybody winds up shooting at everybody else.’

And he’s ostensibly on THEIR side, the right wing. So is conservative columnist David Brooks of The New York Times, who also chose violent imagery. On Meet the Press, he said the Cruz-Trump playoff round is like the Iran-Iraq war.

“I want them both to lose,” Mr. Brooks said, “and I still think that’s going to happen.” He predicted the nomination would go to Marco Rubio, the senator from Florida.

Host Chuck Todd picked up the gunfire motif when he said the Republican race (with 11 candidates still in it) resembles the end of a Quentin Tarantino movie.

“Think of `Reservoir Dogs,’” Mr. Todd said, “where everybody winds up shooting at everybody else.”

MEET THE PRESS: Ms. Clinton joined by remote hookup from Iowa. When Mr. Todd suggested a lack of enthusiasm in her campaign compared to Mr. Sanders, Ms. Clinton said “I see people nodding. I know people are signing up as they leave my events.” Hewing close to the legacy of President Obama, Ms. Clinton referred to the raid that killed Osama bin Laden “and how I advised the President” when she was Secretary of State… Mr. Sanders appeared right after and said “The rich get richer. That is why billionaires are able to buy elections… Congress should represent working families and the middle class and not just wealthy campaign contributors.” When asked about the possibility of Mr. Bloomberg running against Mr. Trump and himself, Mr. Sanders said “You’re going to have two multi-billionaires running for president of the United States against me.”

‘They love him because of the enemies he’s made. All of these establishment figures finally coming out against Donald Trump, that’s like gravy on potatoes for his supporters.’

Mr. Trump, interviewed by Mr. Todd, said of Mr. Cruz “I get along with people. Ted cannot get along with people. He’s a nasty guy and nobody likes him… He started hitting me and I hit him back… I’m not sure I can vote for him. He was born on Canadian soil.” Mr. Trump said he will soon reveal his tax returns and they will be “very beautiful” and he also said: “I try and pay as little tax as possible.” Referring to Mr. Bloomberg’s possible candidacy, Mr. Trump said: “I don’t know if we’re friends anymore.” On a video, Mr. Cruz faulted Mr. Trump for hinting at compromise. “If you want deals with Democrats, then I guess Donald Trump’s your guy,” Mr. Cruz said.

STATE OF THE UNION: Jake Tapper, speaking with Governor Chris Christie of New Jersey, asked him about Mr. Rubio’s joke that the massive snowstorm in the Northeast would freeze the veto pen of President Obama as well as the bureaucrats. Jumbo took offense. “Real immaturity from Senator Rubio to be joking as families were freezing in the cold, losing power and some of them losing their loved ones.” Former Florida Governor Jeb Bush may be going down, but he’ll go down swinging, especially at Mr. Trump. “Donald Trump would be a disaster because he’s not a conservative,” Mr. Bush told Mr. Tapper on a remote hookup. “It’s not strong to denigrate women. It’s not strong to insult Hispanics. It’s not strong to call John McCain a loser because he was a POW. And, God forbid, it’s not strong to disparage the disabled. He’s not the strong horse. He’s insecure and he’s weak.” Perhaps accidentally, Mr. Bush forgot to mention Mr. Trump’s demonization of Muslims… Donna Brazile on Mr. Trump’s popularity with the hard right Republican base: “They love him because of the enemies he’s made. All of these establishment figures finally coming out against Donald Trump, that’s like gravy on potatoes for his supporters.” Mixing metaphors with the best of ‘em, Bill Press said “Trump is running out of runway. He’s thrown the kitchen sink at Ted Cruz.”

THIS WEEK: Rich Lowry, editor of National Review, marched onward with the “Dump Trump” movement he started last week by publishing 22 anti-Trump essays in the current issue. “Elements of the political establishment among the Republicans are hiding under their desks,” Mr. Lowry said. He found it “particularly rich,” he said, that Mr. Trump invoked the name of William F. Buckley, the erudite conservative who founded the magazine. Many years ago, Mr. Lowry said, Mr. Buckley called Mr. Trump a narcissist and a demagogue. “Nothing has changed,” Mr. Lowry said… Referring to the poisoning of the Flint, Michigan, water supply under her successor, Rick Snyder, former Michigan Governor Jennifer Granholm said “There is a mom in Flint who is not going to wait for the revolution to be able to give her child clean water.”

FOX NEWS SUNDAY: George Will, on Ms. Clinton: “The more people see her, the more they seem to recoil.” Fox’s “Power Player of the Week” was Jeff Roe, an adviser to Mr. Cruz, described by host Chris Wallace as “a hardball consultant for a hardball candidate.” Mr. Roe said the word cloud above his man’s head includes “Strong… Christian… Conservative.”

FACE THE NATION: Mr. Trump, on the phone from Iowa, had little good to say of Mr. de Blasio. “He’s turned out to be a terrible mayor. He doesn’t know what he’s doing. I mean, the guy is incompetent.” Of Mr. Bloomberg, Mr. Trump said: “I’d love to compete against Michael. He’s wanted to do this a long time and he never pulled the trigger.” 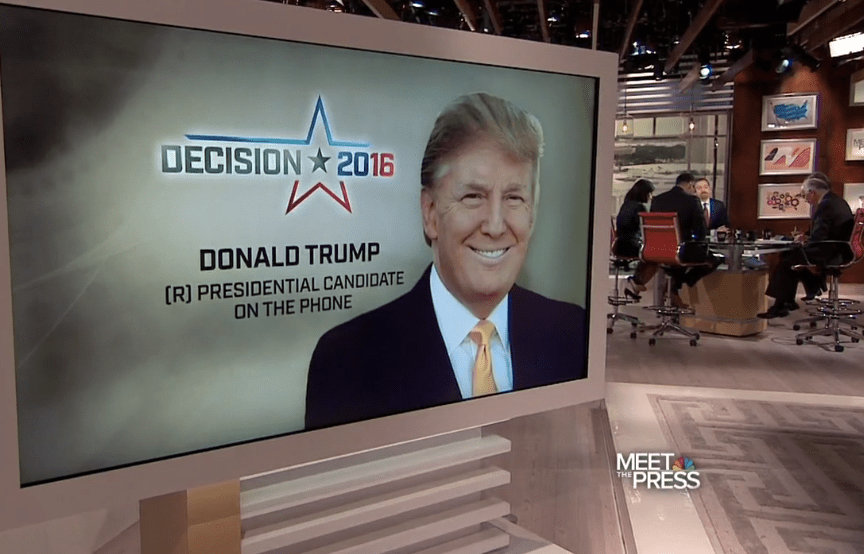